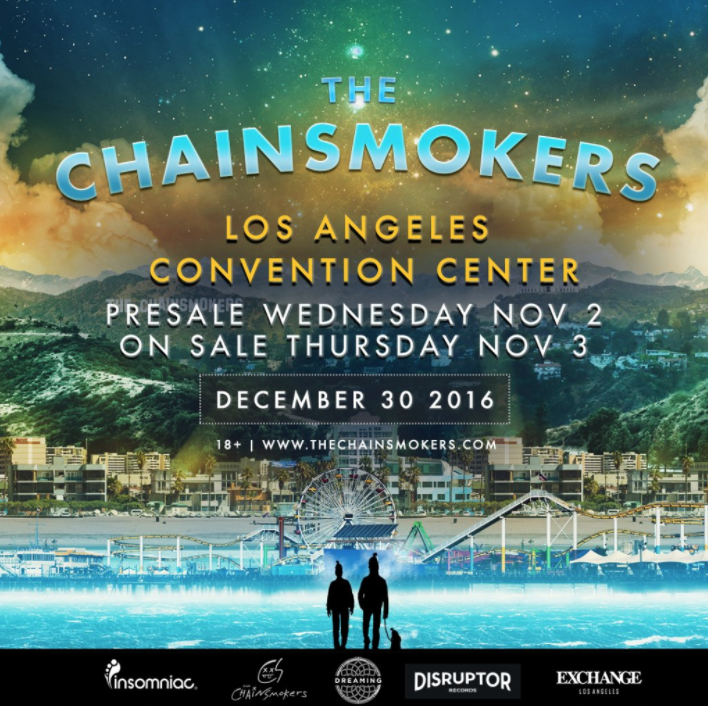 “We must be dreaming that we are playing the LACC. This will be a huge show, and we plan to bring an event that will set the tone for 2017 visually and sonically,” said The Chainsmokers. “Our fans’ experience is above all, and this will be a historic moment for us in our career that we can’t wait to share together.”

After eight consistent weeks at #1 on the Billboard Hot 100 charts, the L.A.C.C. show announcement brings a momentous energy and excitement building from a stellar year for The Chainsmokers. In addition to major success with their hits “Closer” featuring Halsey and “Don’t Let Me Down” featuring Daya, the acclaimed duo have been touring the world with sold-out headlining shows and major festival appearances, including Escape: Psycho Circus this past Halloween weekend. The Chainsmokers have also been lighting up the 2016 awards circuit, nominated for four American Music Awards, two Billboard Music Awards, two Teen Choice Awards and two MTV Video Music Awards.

In addition to a monumental night of music, fans attending the show will have access to a convenient beer garden, delicious food vendors, and The Chainsmokers merchandise to commemorate their incredible performance. For those wanting to take the experience to the next level, VIP passes will be available with a special designated bar and viewing area, as well as expedited entry. Tickets for The Chainsmokers’ December 30 date at the Los Angeles Convention Center will be available through their fan club and Insomniac presales on Wednesday, November 2 at 12 PM PT. The general on sale will begin Thursday, November 3 at 12 PM PT.