UPDATE: Pasquale Rotella has confirmed EDC Las Vegas will in fact be moved to October 2021. Read his full statement below.

I am sorry to say that EDC Las Vegas needs to move to October. I want to thank everyone who has put their heart and soul into this show—the Insomniac team, artists, agents, managers, production crews, the Las Vegas Motor Speedway staff, the government officials who supported us, and most importantly, you, the Headliners.

As we expected and were assured prior to announcing the festival for May, Nevada state officials announced they would lift social distancing requirements as of May 1, creating a path for EDC to happen with strict safety guidelines in place. We just had a meeting in Las Vegas this past Friday with police, fire, medical, and other agencies involved with EDC to plan out details surrounding the event.

However, today, Clark County (home of EDC & the Las Vegas Motor Speedway) passed a reopening plan that requires 60% of their residents to be vaccinated before restrictions over large scale gatherings such as EDC can be lifted. Unfortunately, the rate at which people get vaccinated before EDC is out of our control. It might happen in time, it might not. Either way, we can’t take that risk.

Our team has been working around the clock to organize this event. We currently have over 40 trucks en route to the Las Vegas Motor Speedway from all over the country. The lineup is fully booked and was going to be announced tomorrow at 12pm PT. The team and I are heartbroken, as I know many of you are as well. For those who have stayed with us on this journey, I thank you. Your trust & loyalty is what gives us strength to keep moving forward.

I continue to believe it’s important we get back out on the dancefloor as soon as possible, and I won’t give up on trying to make that happen. I will be announcing an AMA on Reddit in the near future to address any questions.

While some (albeit, smaller) festivals slated for the summer are carrying on with the hope of being executed, some of the larger festivals have already postponed until the fall or next year. EDC Vegas, which was supposed to happen in May, had given us no sign of postponement just yet, leaving everyone wondering for answers.

It seems we have them. While no official announcement has been made by the bossman himself, multiple sources have confirmed that the festival is going to get pushed to October 2021, with an announcement coming in the next week or so.

With everything going on, it makes sense that the festival would get pushed. Production of that size would want to be secure in the safety of all attendees. While a vaccine rollout is heavily underway in the United States and President Biden has promised that all Americans will be eligible for a vaccine by May 1, we don’t know if that will be the reality. Even if it is, it doesn’t mean everyone will be vaccinated by the date that EDC was supposed to happen. Pushing it to October gives a better chance of a successful, safe, event. May may still hold COVID restrictions that would restrict the festival.

The new dates for the sold-out festival is rumored to be October 22-24, 2021. Source confirms event vendors are being informed EDC will be postponed to the new October date. 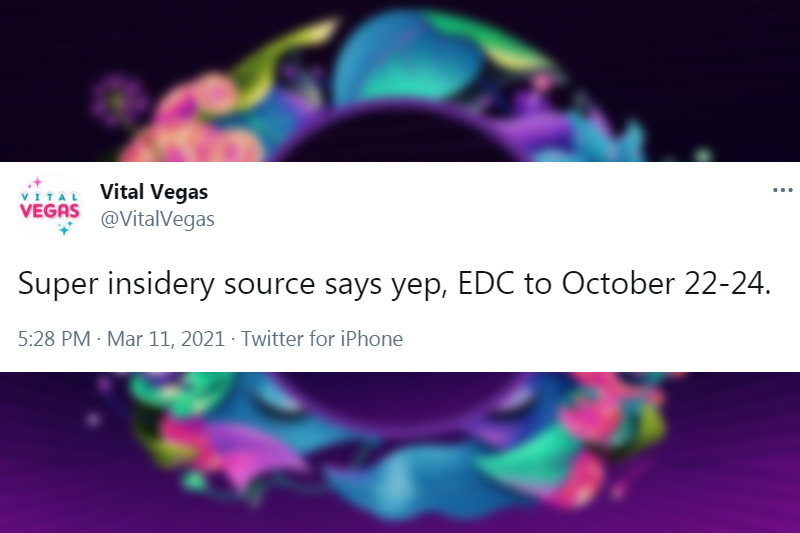