Two of the biggest and most notable promoters in electronic dance music, Disco Donnie Presents and React Presents, have partnered up for a Halloween celebration this October 27 and 28 for two days of ghoulish fun at Sam Houston Race Park in Houston, TX. The promoters also announced four of the biggest and boldest names in electronic music as their headliners. Carving out the beats are luminaries DJ Snake, Excision, Kaskade, and Porter Robinson (DJ set). In the coming weeks, dozens of other national and international renowned artists and DJs will be announced to get the Houston Halloween ritual started right.

Freaky Deaky Texas is the newest edition of the Freaky Deaky Series, typically held in multiple cities in the U.S. and represents the inaugural Halloween partnership between LiveStyle event brands DDP and React.

“We’ve produced Something Wicked for six years and felt was time to bring Houston an all new experience. For 2018, we’ve brought in a new festival brand and partners to help accomplish that goal. In coming weeks, Freaky Deaky Texas fans can expect dozens of more artists to be announced, alongside plenty of new surprises across three stages.”
-Disco Donnie 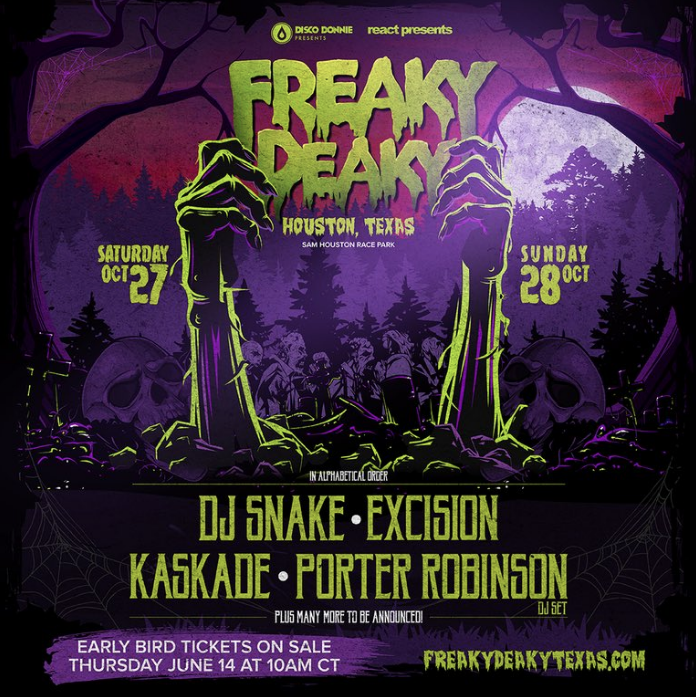