Following the horrific shooting during the 2017 BPM Festival, Cristina Torres Gómez, the Municipal President of Business Coordinating Council of the Rivera Maya, made a public announcement that The BPM Festival and all events of that nature are officially prohibited. The death toll has risen to 5 dead and 15 wounded, with unconfirmed reports of more deaths and injuries unaccounted for. Due to the frenzy that ensued after the shooting, stories have been popping up all over the web with many of them being eye-witness accounts including ours. 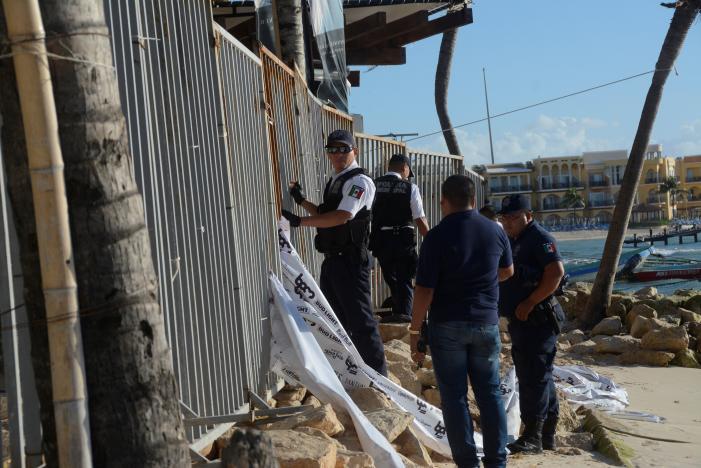 Police officers stand outside the Blue Parrot nightclub after a gunman opened fire early on Monday outside the venue, killing several people and injuring others during a BPM electronic music festival, according to a statement of the organizers, in Playa del Carmen, Mexico, January 16, 2017. REUTERS/Stringer

What seems to be in agreement with all eye-witness accounts are the following facts: The shooting occurred around 2:25-30AM, there were multiple gunmen as the shooting was reported to have come from outside and inside the venue, and the event was targeted most likely over cartel disputes that may have involved BPM Organizers and the police.

What generally was deemed as a safe place for tourist was really a disguise over the blatant gap in wealth and regional violence in the area. Reuters reported from a local source that syndicates from all major Mexican cartels are now operating in Quintano Roo, the region where Playa Del Carmen is located.

Local online blogs are also circulating this image around of a morbid spray-painted message that would foresee that the area may be on the brink of a cartel war. It mentions Phillip Pulitano, who is one of the co-founders of the BPM Festival.

“This is a demonstration that we are here, and it was because you didn’t get in line, Phillip [from] BPM. This is the beginning, and we’re going to start cutting off heads of [rival drug cartels].”

The image and its link to the Blue Parrot shooting has not been confirmed by other major news sources.

The BPM Festival is 10-day festival that was celebrating its 10 year anniversary at Playa Del Carmen.