As revelers traversed the vibrant landscape of EDC this year, some may have noticed graphic recruitment posters plastered around the venue related to their upcoming event Project Z. Said posters were linked to the next chapter in Insomniac’s celebration of Bass Music and Hardstyle, hosted by both Bassrush and Basscon. The festival came about in 2016, arising to unite of headbangers and hard dancers on one group of dancefloors. 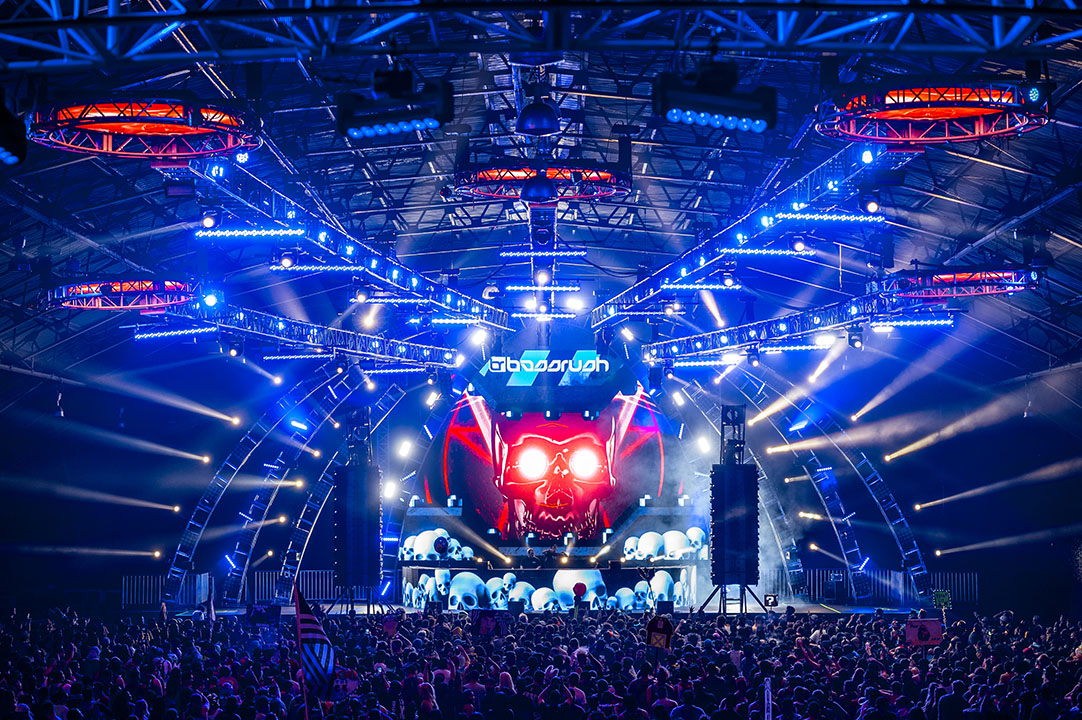 As time went on, Insomniac became keen to evolving the event’s aesthetic further. As the only festival that houses two diffrent crowds as opposed to Dreamstate or Factory 93, the SoCal promoter decided to have some fun with this dichotomy. They brought together the talents of themselves and Hero Projects to birth an original story with visual stimuli that best reflects Bass Music and Hardstyle in their eyes. With that, the show’s official comic, set on Earth in the year 2321, was born. Titled Battle for the Triarc, the Story’s synopsis is as follows:

An Earth-Shattering Asteroid Changes the course of mankind forever. The few who survived sought to rebuild what was lost, factions of people scattered across the Earth, unbeknownst to one another, fight to survive on this now desolate Earth.

With energy and resources low, faction leaders send teams far and wide in search of Zerogen, a sustainable energy source fused by nuclear materials that could last generations,. The only problem is, both Zerogen and its facility are lost to myth and dust, the Triarc has laid hidden from them all…until now. 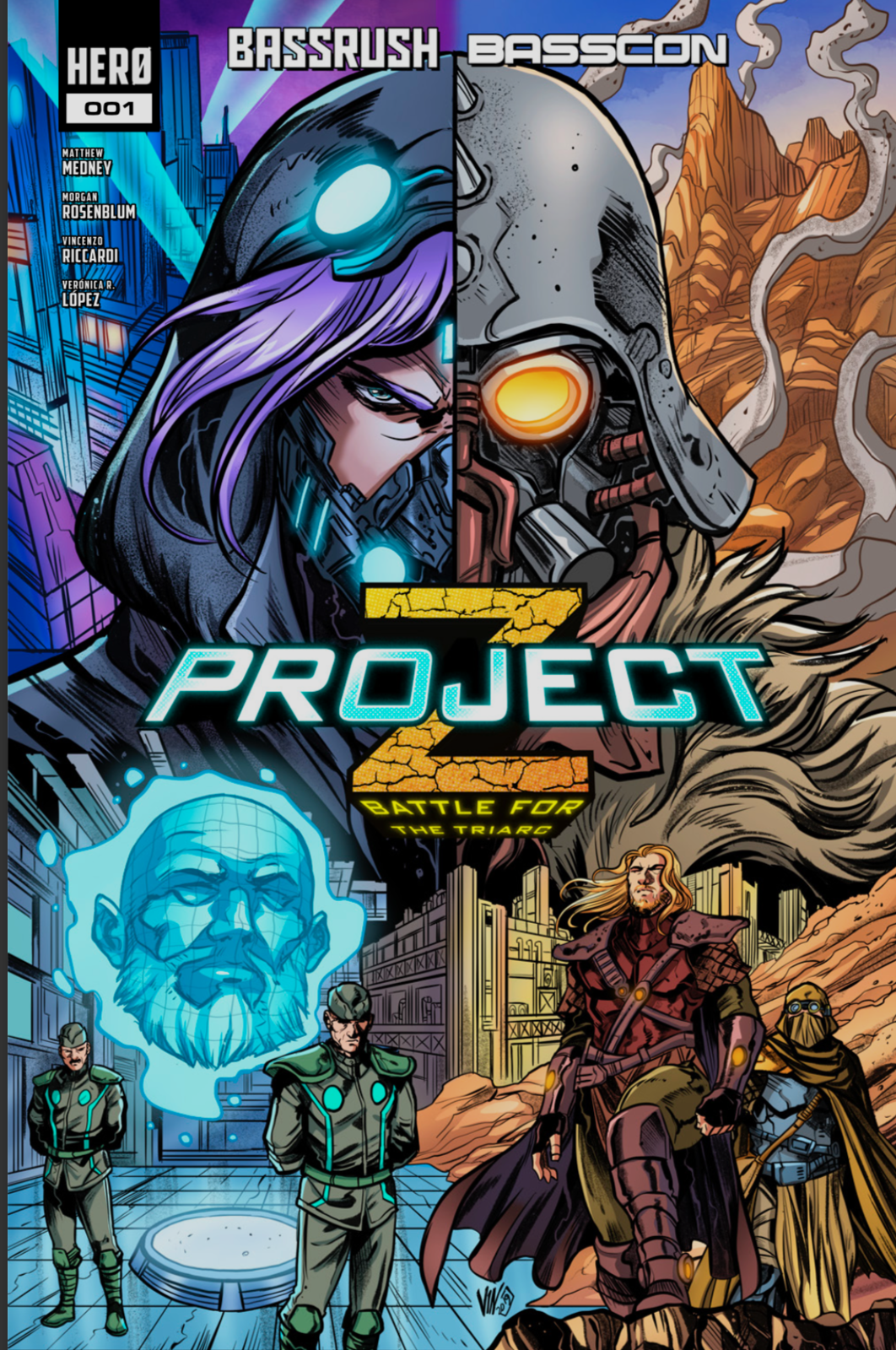 With a summary like this, Battle for The Triarc sets up an intense plot ahead. Insomniac and Hero Projects’ main intention with it is to integrate the series with their festival the way comic books integrate into today’s pop culture. Those in front of recruitment posters are asked to choose a side, each army led by the story’s opposing principal characters. The blue and purple clad woman is Commander Lynx, who represents Bassrush’s home turf “Zenith” with a slender and futuristic looking warrior outfit. The masked face of Basscon is Osiris, is a fully masked and seemingly menacing ruler of a hidden kingdom on the outskirts of Kansas. 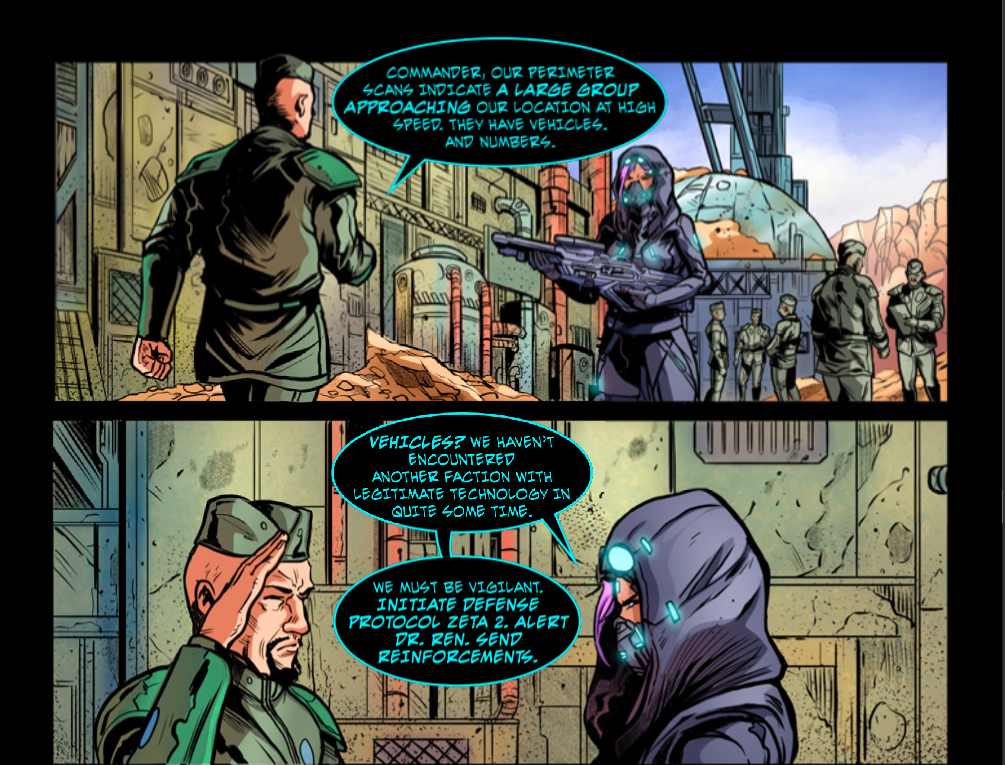 The plot kicks off with an establishment of Osiris and Lynx’s separate societies. Zenith is an advanced city with a holographic head “Dr. Noah Ren” both educating children and overseeing the army in their efforts to find The Triarc, the energy resource mentioned above. All of the characters(and the pages set in their city) are bathed in cool, neon tones with tight clothing and ornate, uniform designs.

Osiris’s kingdom appears to be more of a rough area, with their surrounding environment as barren as the Triarc’s location. Each character illustrated stands out from the other among the sand brown pages of their world, with torn clothing and rugged textures to their armor. On this side of the comic’s world, there are no children in sight; only tough soldiers. Both civilizations discover the Triarc simultaneously and begin their conflict by the end of the first issue: 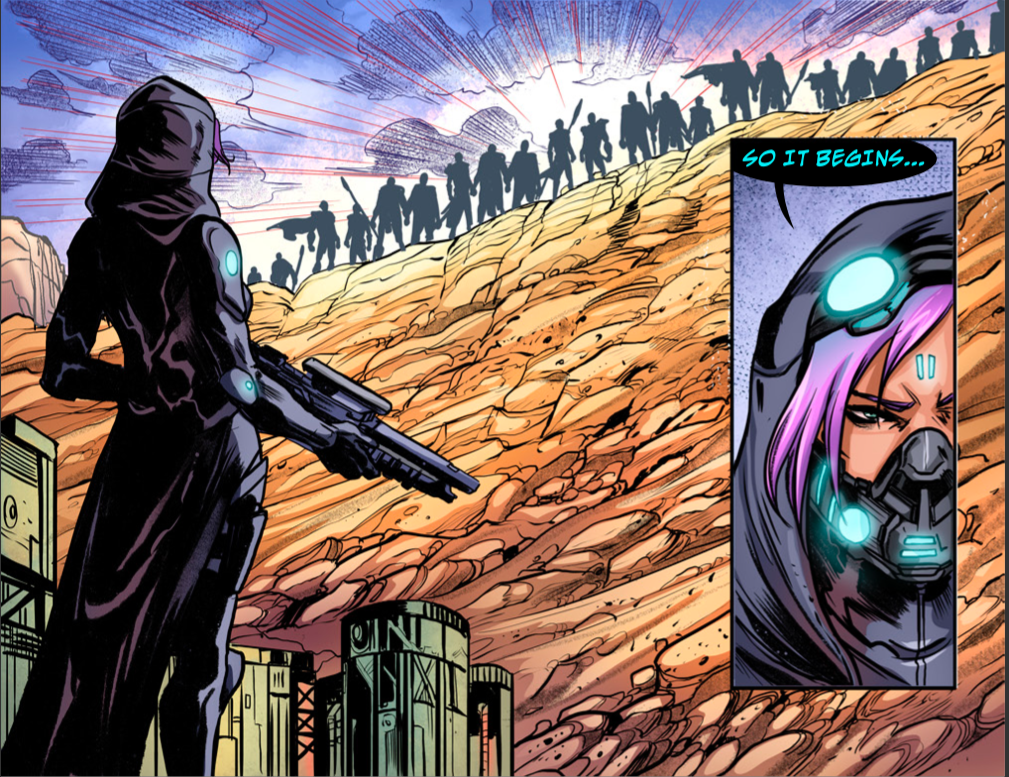 This battle has an effect on the real world as much as it does in the comic. The two separate Bassrush and Basscon stages will serve as Lynx and Osiris’s home bases. The third stage is set to host the ensuing fireworks. The creators shared that this story will continue to evolve as the festival progresses. This means every year’s new iteration will augment to fit the plot milestones and twists that unfold in the comic book. 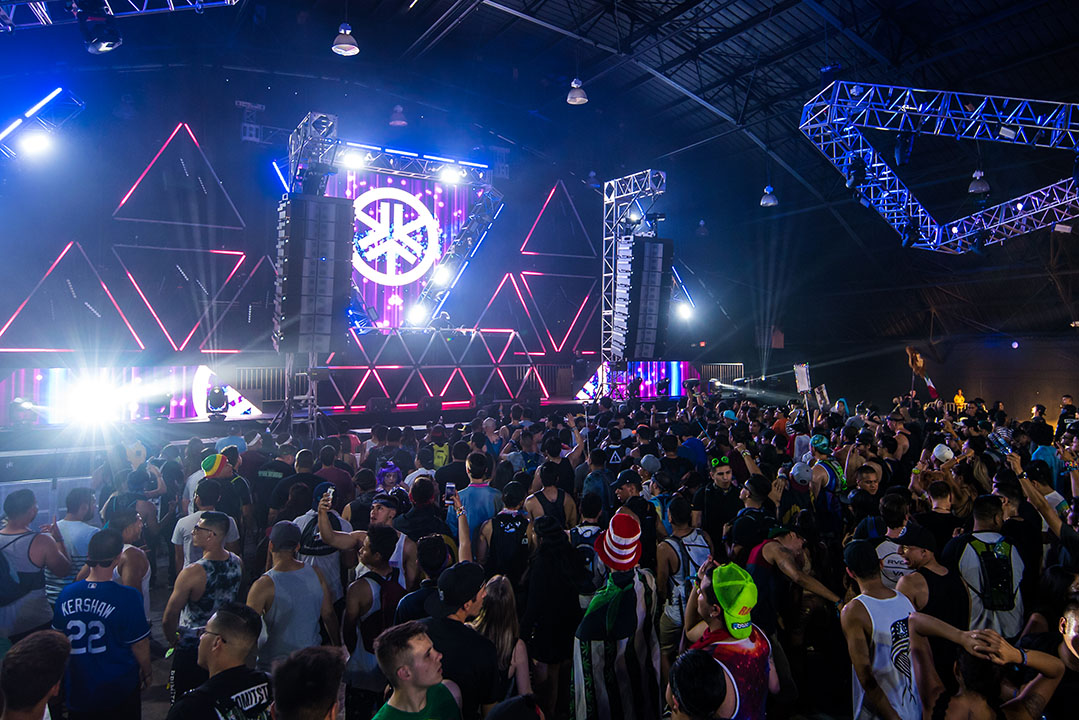 This new story is a great way to illustrate the separate energies of both crowds at the event. Bassheads and Hard Dance junkies may have differing tastes, but they both have the most raw energy and fastest BPM of any corner of the Dance Music ecosystem. Illustrating their styles colliding like this is a cool new step in Insomniac’s own quest toward making every event a unique experience.

Project Z is still on sale for next weekend, with an insane series of visual treats to match the ear candy we know will be provided by artists like Borgore, Gammer B2B K?D, Riot Ten, Kutski, Calyx & Teebee and many more artists. You can still grab tickets for the event on the official website. To learn more about Hero Records, check out musicmeetscomics.com.