Skrillex revealed a treat in the form of news about one of his many albums to come. On a recent Insta story, he detailed that all of the finishing touches are being applied as we speak. 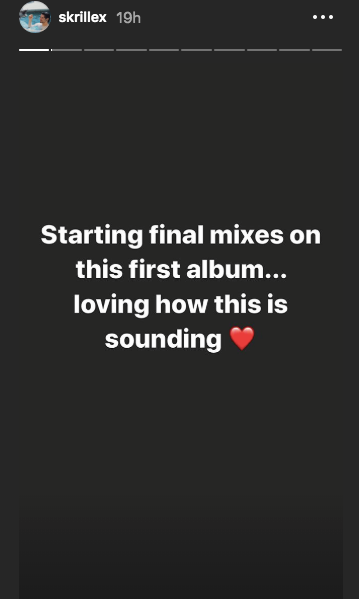 So far there is still speculation on collaborators, but based on interviews we know that this will be 100% his own inspired work, as opposed to the several songs by artists whose records he helped produce. There’s not too much more time to wait….and though the world has somewhat paused because of unprecedented global social distancing, this means all of these touches may just happen faster.

The thing is with this album, every single of piece music [unintelligible] been what I have right then and there and then it was run and gun. This is the first time I’ve really been taking my time, being precious about a few of these releases. But soon, man. I’m doing some videos, making some content, getting ready for these next records. […] I’ve never sat down and been completely tenacious about one of my releases like this.

Sty tuned for more news on the new album.