Beginning Wednesday, Feb. 13 at 10 a.m. PST, Headliners from around the world can purchase official shuttle passes for the 23rd annual Electric Daisy Carnival – Insomniac’s flagship event returning to Las Vegas Motor Speedway Friday, May 17 through Sunday, May 19. Featuring Premier and Standard Shuttle services, Insomniac’s official EDC Las Vegas shuttles offer Headliners the most convenient and comfortable commute to and from North America’s largest dance music festival, multiple shuttle locations throughout the city, and new pick up times along with being the only charter bus option that provides fans access to the Las Vegas Motor Speedway.

Three-day Standard Shuttle passes begin at $99 before fees, while three-day Premier Shuttle passes start at $199 plus fees and will be available for purchase at edclasvegas.com/shuttles. All shuttle passes include three-day round-trip transportation to and from EDC Las Vegas with designated pick-up locations throughout the Strip and Downtown Las Vegas. 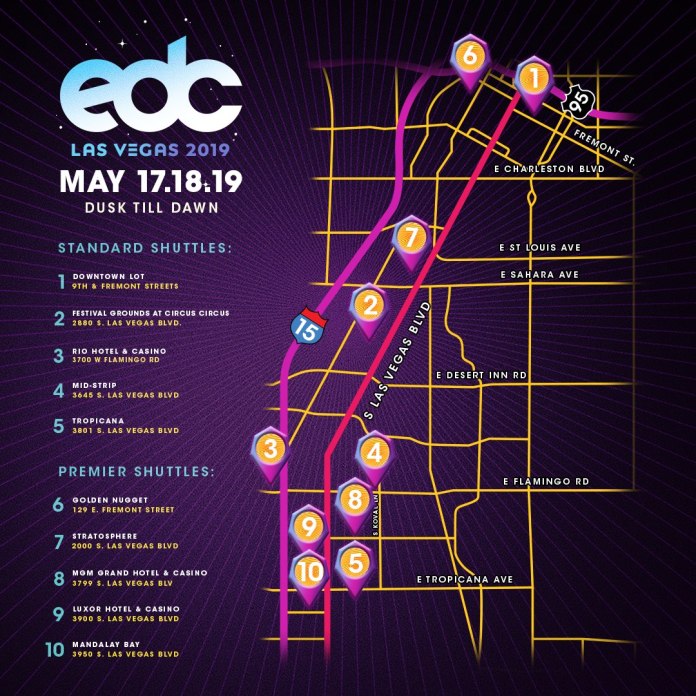 Standard shuttle services to the speedway will run daily from 6 to 11:30 p.m. and return from the festival between 3 and 6:30 a.m. Locations included in the Standard Shuttle package include Rio Hotel & Casino; Festival Grounds at Circus Circus; Downtown; Mid-Strip and Tropicana (south strip). 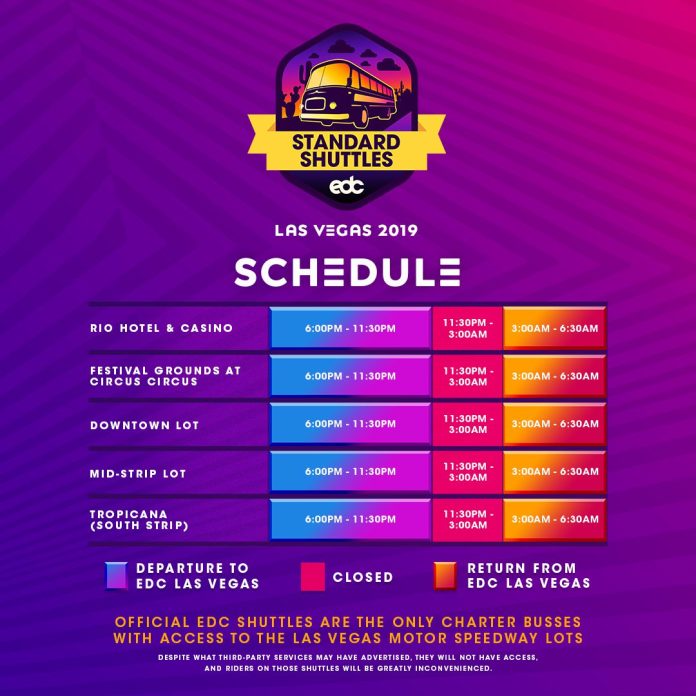 Premier Shuttle Passes start at $199+fees. Premier Shuttle riders will receive a variety of perks including a gift bag with exclusive EDC items and daily treats and access to air-conditioned tents and seating at the Las Vegas Motor Speedway pick up point. Headliners will have five shuttle locations to select from including Golden Nugget Las Vegas Hotel & Casino; Luxor Hotel & Casino; Mandalay Bay Resort and Casino, MGM Grand Las Vegas Hotel & Casino; and The Stratosphere Hotel and Casino. In addition, Insomniac will offer earlier departure times this year with premier transit to the speedway beginning at 6 p.m. with additional pick-ups at 8:30 and 11 p.m. Returning charters will run at 3, 4 and 6 a.m. 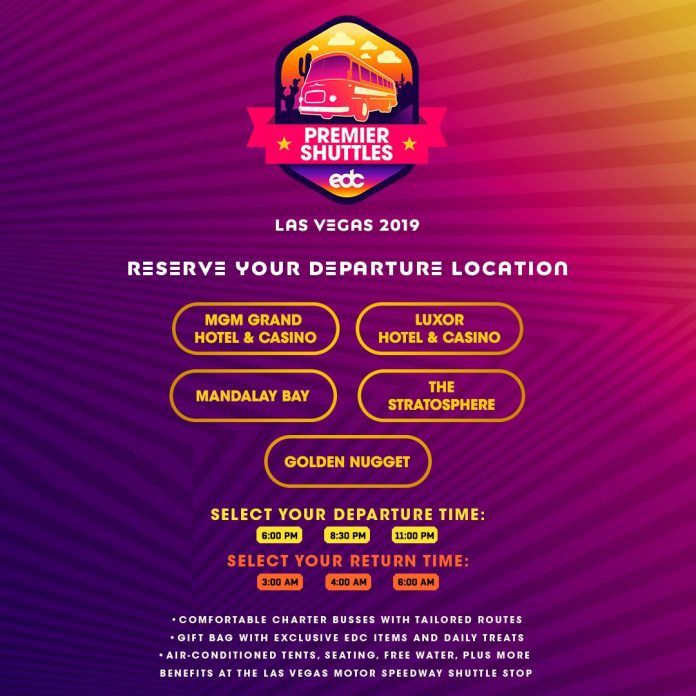 Headliners looking to attend the Opening Ceremony at the festival on Friday, May 17, can RSVP for early shuttles from 3 to 6 p.m. departing from the festival grounds at Circus Circus for an additional cost of $5. Entertainment will begin on the cosmicMEADOW stage at 4 p.m. with the full festival grounds opening at 7 p.m. Additional perks for both services include restrooms prior to boarding and security pre-checks to eliminate wait times upon arrival at EDC. On and off-site guest service teams will be available to help field questions and address concerns.