Last May 2016, Kaskade made history as he drew more than 25,000 fans inside the Los Angeles Convention Center with his biggest solo show to date, which for any DJ it’s an important part of their career to headline such a massive solo show. Ever since then fans have eagerly been waiting for Ryan’s return to Sunny California constantly asking when is the next “Kaskade LA Part 2” happening? Fast forward a year later exact Kaskade teases fans on Twitter on the next massive LA show, “My team + I have been working tirelessly to produce a follow-up show to #LACC. Hope to make an announcement for LA/SoCal coming soon.” This drew everyone into a frenzy waiting for this “announcement” to come but never did.

Are you free this July? It’s not us asking…it’s this DJ you may know named Kaskade. His window of opportunity came when one fan straight up asked him if he was coming back to SoCal. By surprise, he responded by quoting the fans Tweet asking us if we’re free on Saturday, July 15th: 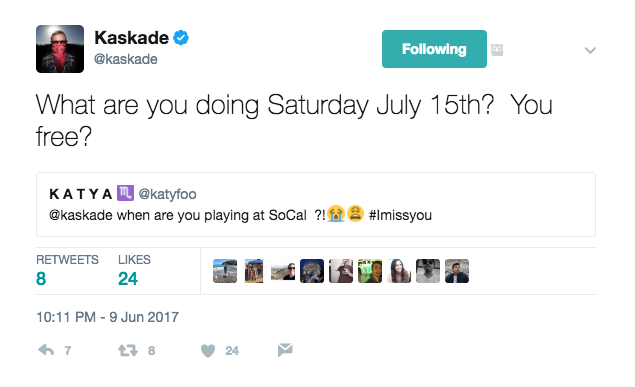 Looks like it’s going to be called “SunSoaked,” but that could be a working title. Whether that’s the case, or someone on his team barked at him for leaking the news too early, the announcement has been deleted. Stay tuned for the full-fledged announcement, which we hope comes the morning after we land from the electric sky.

Till then listen to Kaskade’s set LIVE from the LA Convention Center last May 2016.