Morrissey just announced some Western U.S. tour dates today, one of which is a headlining slot at the inaugural When We Were Young festival in Orange County, California. The rest of the lineup is heavy on millennial nostalgia, and also men: AFI, Descendents, Taking Back Sunday, Alkaline Trio, Silversun Pickups, Dr. Dog, Streetlight Manifesto, Foxygen, Joyce Manor, the Get Up Kids, Saves the Day, Beach Fossils, and Sheer Mag.

Also on the bill: Cage the Elephant, Choking Victim, Mount Eerie, the Frights, Balance and Composure, Homeshake, Turnstile, David Bazan, Pinback, Tijuana Panthers, Together Pangea, Set Your Goals, Sunflower Bean, Cat Signs, Moving Units, Sadgirl, the Buttertones, Plague Vendor, No Parents, and the Regrettes. This sounds like a good time, especially for emo teens who grew up to be Bandcamp connoisseurs; on the other hand, just five out of 35 bands on this lineup feature women, a pretty damning ratio in 2017. May we suggest: Add Tegan and Sara, Metric, and the Thermals, then lose Cage the Elephant.

When We Were Young takes place April 8 and 9 at the Observatory in Santa Ana. Tickets go on sale Friday; check out the official poster below. 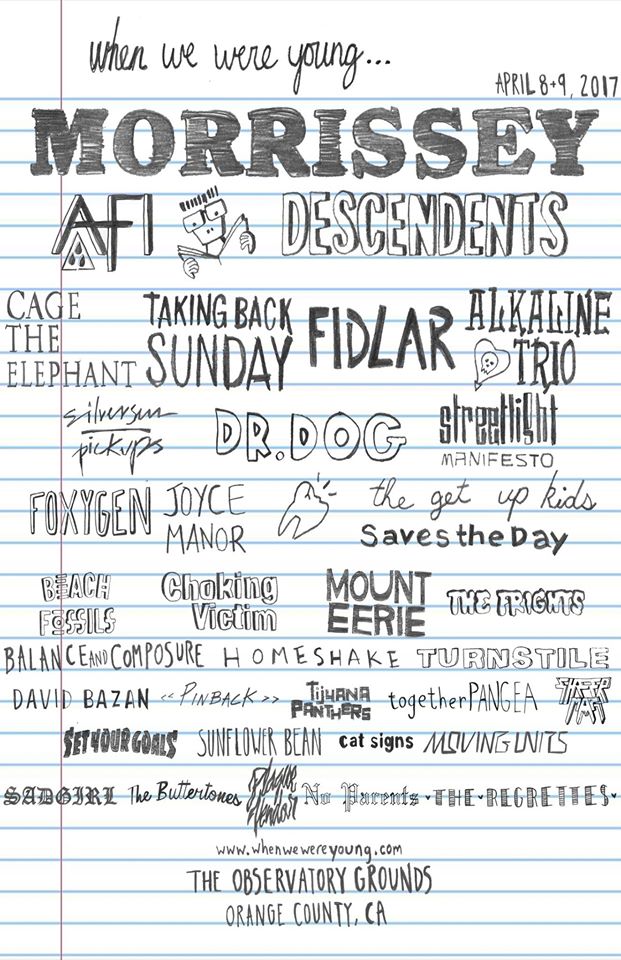 When We Were Young Festival Tickets: TBA

When We Were Young Festival Set Times: TBA