Before they take over center stage at Splash House this weekend in Palm Springs, Australian alternative dance trio, Rüfüs Du Sol will be treating locals and visitors to a live performance  at the Santa Monica Pier with a live performance. It’s not officially summer until the Twilight Concert Series start, the iconic free concert events in the heart of Southern California at the Santa Monica Pier. Every Thursday until September 8th, the iconic Twilight Series brings you the best in music and live performances from all genres. The concert starts at 7pm and ends at 10pm.

Following their recent North American Tour announcement, Rüfüs Du Sol is bringing their top-notch live production to the Santa Monica Pier, keyboard, drums, guitar, vocals and all, to create a surreal musical experience for everyone attending to enjoy. This year the concert series brings back theme nights so this week is for the dance music lovers. With the release of their highly acclaimed album “Bloom” released earlier this year, the trio has a lot in store for their performance. 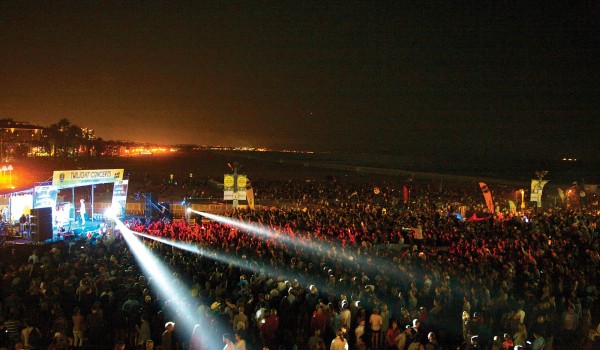 The best part is that this concert is free! We suggest you arrive early to reserve a spot due to the high volume of attendees as well as factors like traffic and parking situations. It is encouraged to use the newly opened Expo Line for those traveling west. The Downtown stop is at 4th and Colorado, just a few blocks from the Pier. In addition to the train, several bus lines provide service to the Downtown area or locals can use the Breeze bikeshare system. We also recommend the bus, carpooling, or any other means of alternative transportation or visit here for more parking information.

Dance the night away with Rüfüs Du Sol, and take a look at what’s in store for the rest of the summer!

For more information on the Twilight Concert Series visit here.