The BPM Festival has locked in more than 80+ showcases for their 10 year anniversary. Being an international stop that fosters the preservation and growth of electronic music, many of the world’s most renowned artists and record labels you see today got their break or jumpstart here at the BPM Festival. Below you will find a list of events that we believe showcase some of the world’s next upcoming talents. 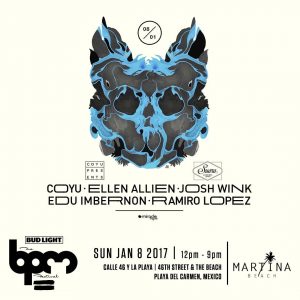 Suara, the Barcelona-based record label founded by Coyu in 2008, will be hosting an showcase during the opening weekend of the BPM Festival with an all-star lineup including their founder, Ellen Allien, Josh Wink, Edu Imbernon, and Ramiro Lopez. With over 145+ releases, Suara has seen support from the likes of Carl Cox, Adam Beyer, Loco Dice, and many others. 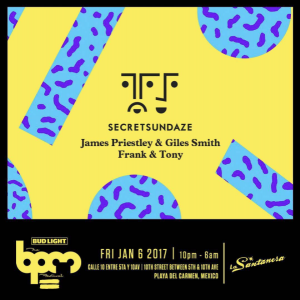 Founded and represented by its two founders, James Priestley & Giles Smith, secretsundaze is a record label in London coveted for their infamous daytime parties that has made it an influential voice in UK house and techno music. Since its inception in 2002, the label has grown and held several residencies in venues such as the Panorama Bar, Output, Space, and Studio 80 just to name a few. 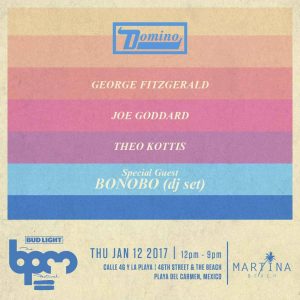 With an artist roster comprised of the Arctic Monkeys, The Killers, Four Tet, and Dan Deacon, the Domino Recording Company is proud to be a part of the BPM Festival by introducing their own showcase that’s backed up by some brow-raising artists including George Fitzgerald, Joe Goddard, Theo Kottis, and a very special guest, Bonobo. 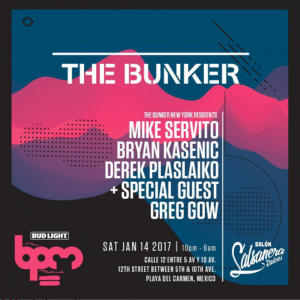 The NYC-based party circuit, The Bunker, will be hosting a showcase of their own residents featuring Mike Servito, Bryan Kasenic, Derek Plaslaiko, and Greg Gow. All of their performers are natives from the United States’ underground dance music ring and exhibit high-calibre mixing styles from Detroit and New York 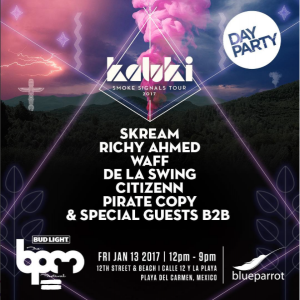 Deep in the underground of Manchester’s house and techno scene is the record label Kaluki Musik that started out in dingy basement and one of the last groups to throw raves at the legendary Sankey Soaps. Kaluki Musik will host a massive showcase to kick off their Smoke Signals Tour with the likes of Skream, Richy Ahmed, Waff, and many more! 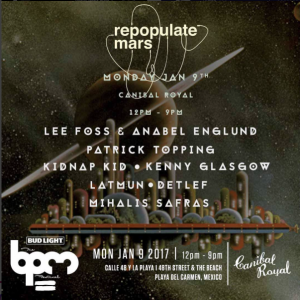 What started as a series of parties by the one and only Chicagoan, Lee Foss, transformed into a record label earlier this year. Repopulate Mars’ releases over the year embodied the unique musical ethos we all know and love Lee Foss by. Acts of the night include those who have released work over the year include Patrick Topping, Kidnap Kid, a special performance with Lee Foss  & Anabel Englund, and many others. 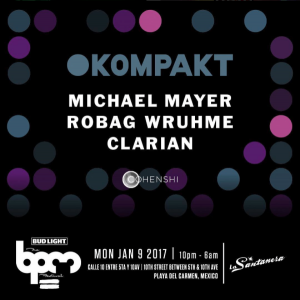 Kompakt is the German record store and international distributor that opened in 1998. Known for championing the ‘Cologne sound’ that encompasses genres from minimal techno, bouncy tech-house, and even some pop and trance. Other labels soon joined Kompakt’s fold to develop their own styles of ‘Cologne sound’ that includes a mix of harmony, minimalism, and nostalgia. 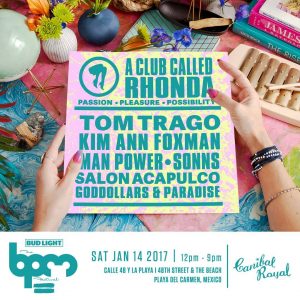 In just short of a decade, A Club Called Rhonda has blown Los Angeles clubbing scene away. ‘Unique’ would be an understatement to describe what you would experience at one of their parties. Described as the pansexual grande dame of Los Angeles nightlife by LA Weekly, A Club Called Rhonda welcomes people of all sexual orientation to their domain and always headline their events with top-notch DJs and turntablists from all around the world. 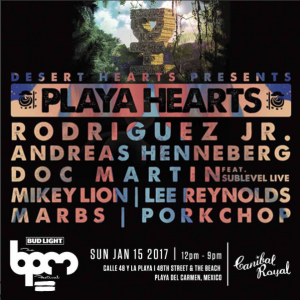 The rag tag collective of house and techno lovers, formerly known as Desert Hearts has been blowing the masses by storm with their City Hearts tour. Their second international tour has just kicked off and will be heading to the Playa on the last day of BPM showcases with the original Desert Hearts crew and one of their biggest influencers and partners Lee Reynolds. Don’t miss out one of hottest rising groups in today’s scene! 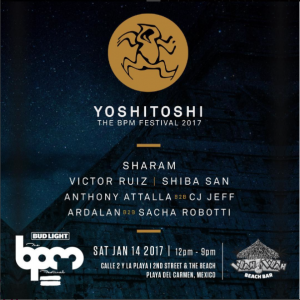 Founded by the legendary house producer and half of Deep Dish, Sharam, Yoshitoshi Recordings is a dance music label that has a released a wide array of dance music, which reflects the tastes of Sharam. With that being said, it is no wonder that Sharam has invited the likes of Dirtybird players to showcase today’s favorites in dance music including Shiba San, Victor Ruiz, Ardalan, and Sacha Robotti.