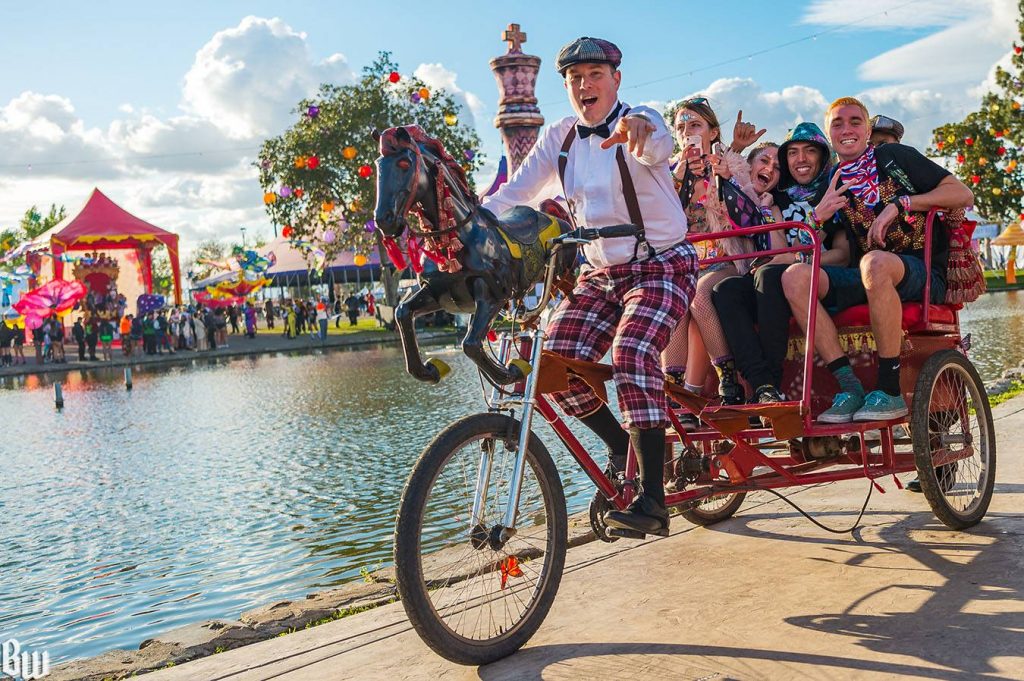 The dawning of festival season in California begins with a bang thanks to Insomniac’s Beyond Wonderland in March. Going strong for 8 years now, the festival has taken shape in several ways in terms of its length, location and thematic design. For the 2018 rendition, they made a sweet homecoming to the NOS event center and brought along several refreshing enhancements to their two day experience. It’s always impressive to see how Insomniac shows the fruits of their labor to improve their shows every year. 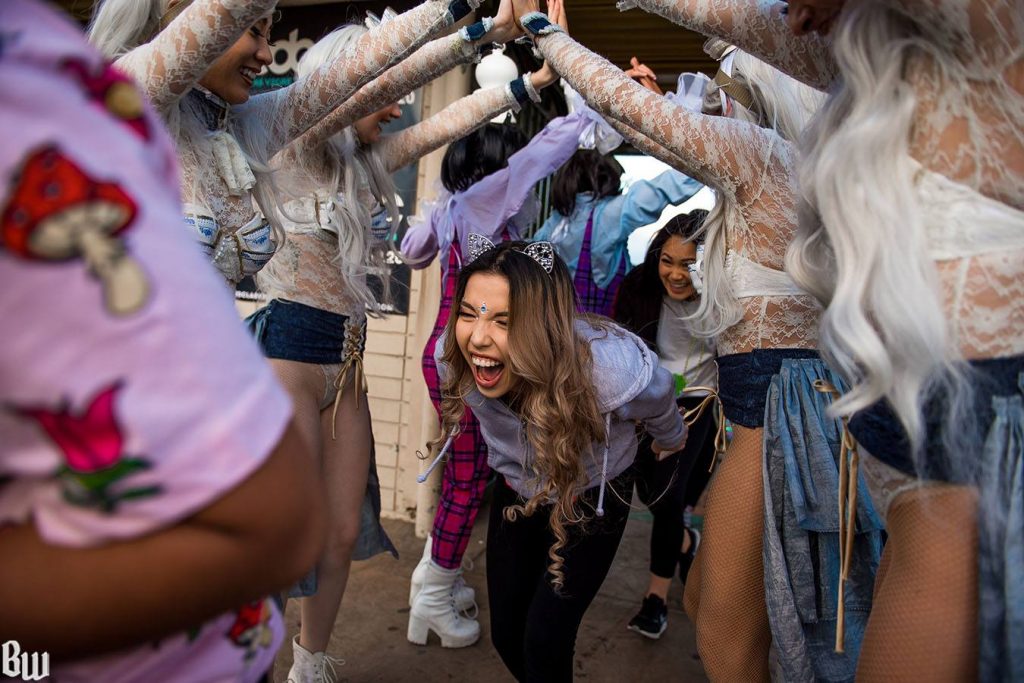 Walking through the gates took us through another rabbit hole to paradise. In addition to the ornate decorations on nearly every inch of land they can find, Beyond always populates itself with several fascinating creatures that would inhabit this Alice in Wonderland-esque rave universe. Big mushroom set pieces adorned the outside of the lake, a flaming teapot lit up the night along with cups on lily pads floating in the NOS’s lake, and costumed creatures frolicked around with their pet caterpillar totems flying above them. We can say with full confidence to expect the unexpected each time you waltz into wonderland. 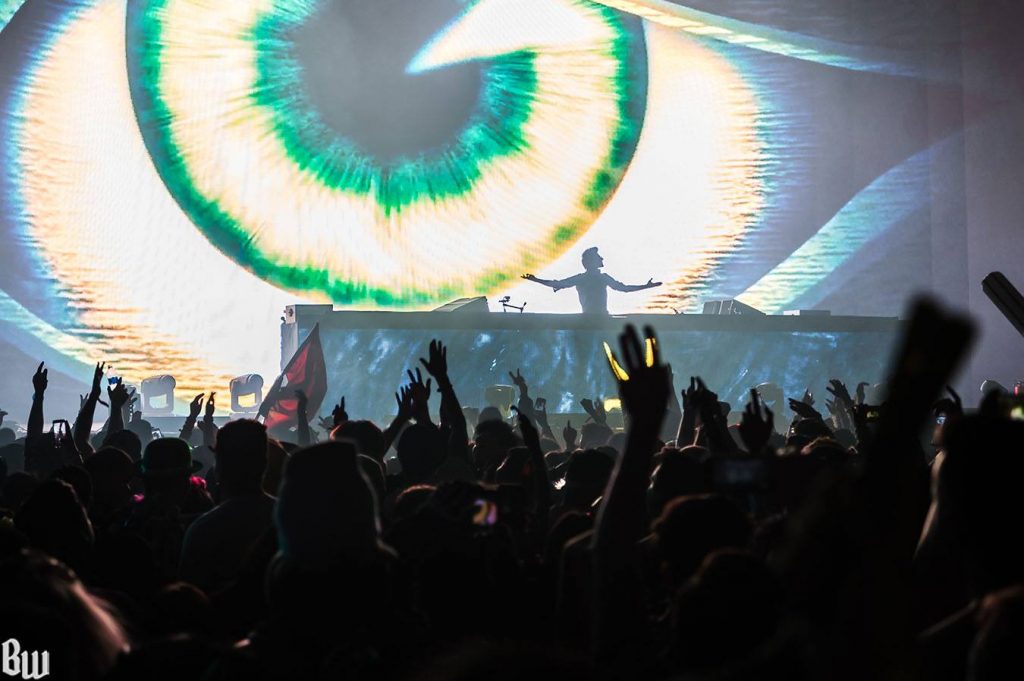 Rain or shine, the powers that be make sure the highest quality beats are enjoyed under Beyond’s whimsical electric skies. Luckily, every big stage was guarded by some form of roof when it did start to shower a little. All of the stages made creative use of the railing designs you see at several events. For example, a circular railing was the centerpiece for Queen’s Domain, paired with mega-structure-esque arches and a custom LED display that showed off each artist’s visuals. 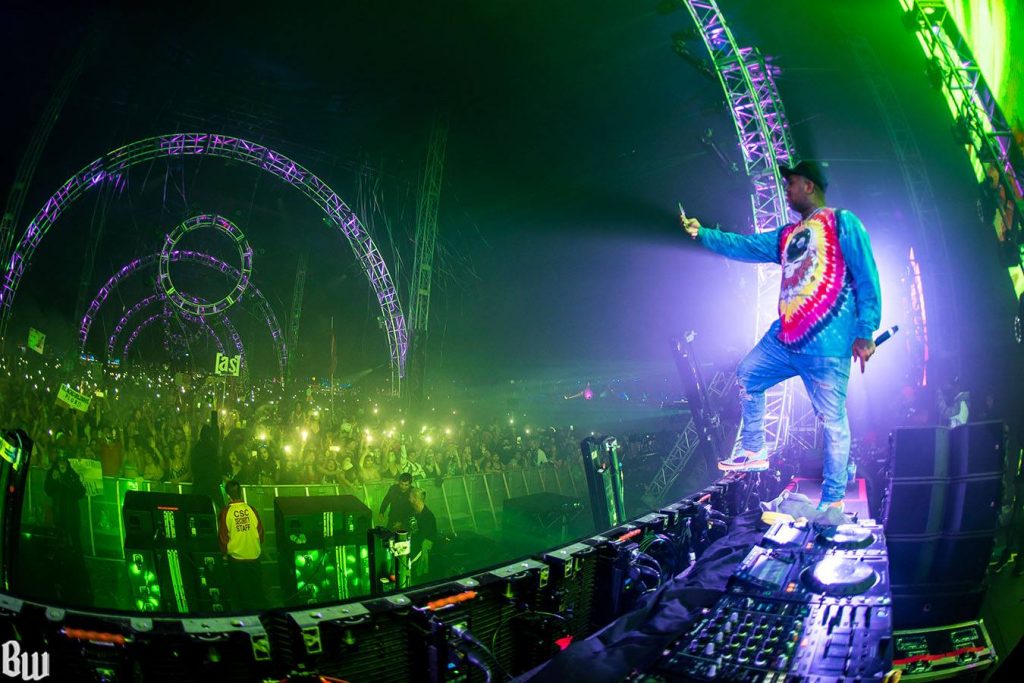 VIP was the MVP, serving up loads of treats and collectibles for their valued headliners this year. In addition to coffee and tea to keep the energy going, guests were treated to some delicious cake, cookies AND had a stocked Hookah bar to channel their inner caterpillar. Beyond all that, there was a neat VR experience to enjoy for  quick second while on a break from the action. While the Queens Domain served as home base, VIPs had viewing areas in the other stages to frolick in as well; the occasion was made even sweeter thanks to their special lanyard to commemorate the occasion. 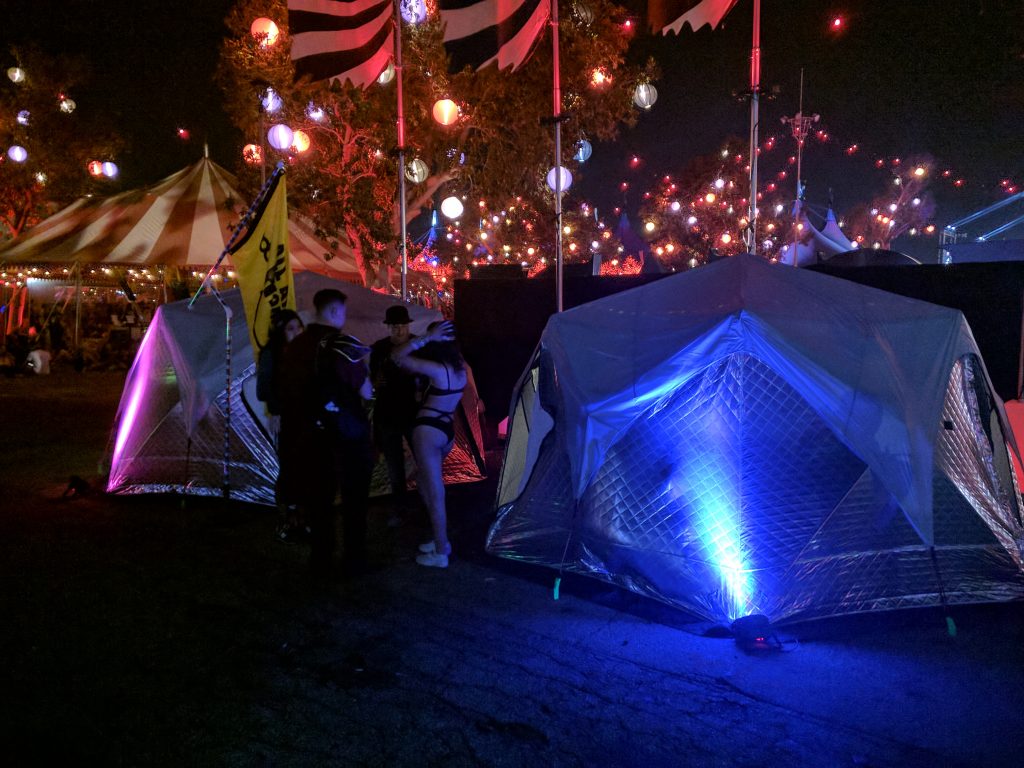 Insomniac always provides a taste of their upcoming events when they throw one, and this time they included a special treat: a sneak peek inside the special EDC tents that will populate their first ever Vegas Campground. For a tent with an iridescent anti-sun exterior, the inside had us mind-blown. As a quick reminder, the ShiftPods will be big enough to fit two to four people, including a couple of mattresses and their things. When we went to see it, we even saw six people fit in at the same time, with the taller folk in the group able to stand up straight. 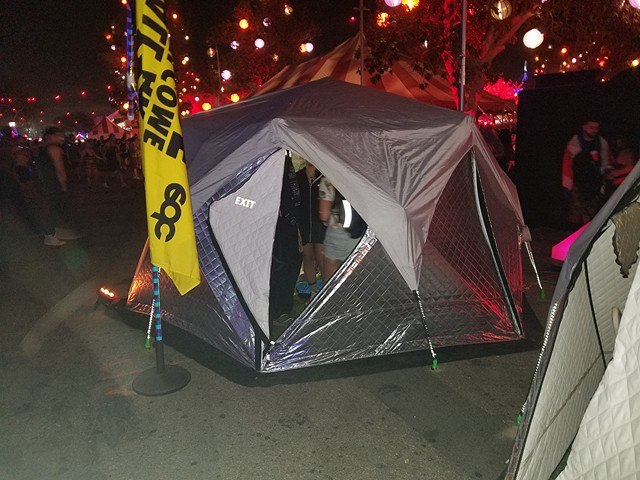 For a tent that allegedly takes little more than a minute to construct, these tents are quite impressive. While some report problems with the size and weight of the shifted while traveling…that won’t be an issue at all since the pods will all her as ready to go as the sample in the festival, grass and all.  If you want to check out the tent again or show your friends, you can take a peek inside at any upcoming event at Exchange LA…yes, it’s worth cancelling your usual posh suite at [Insert usual last minute Vegas hotel here]. 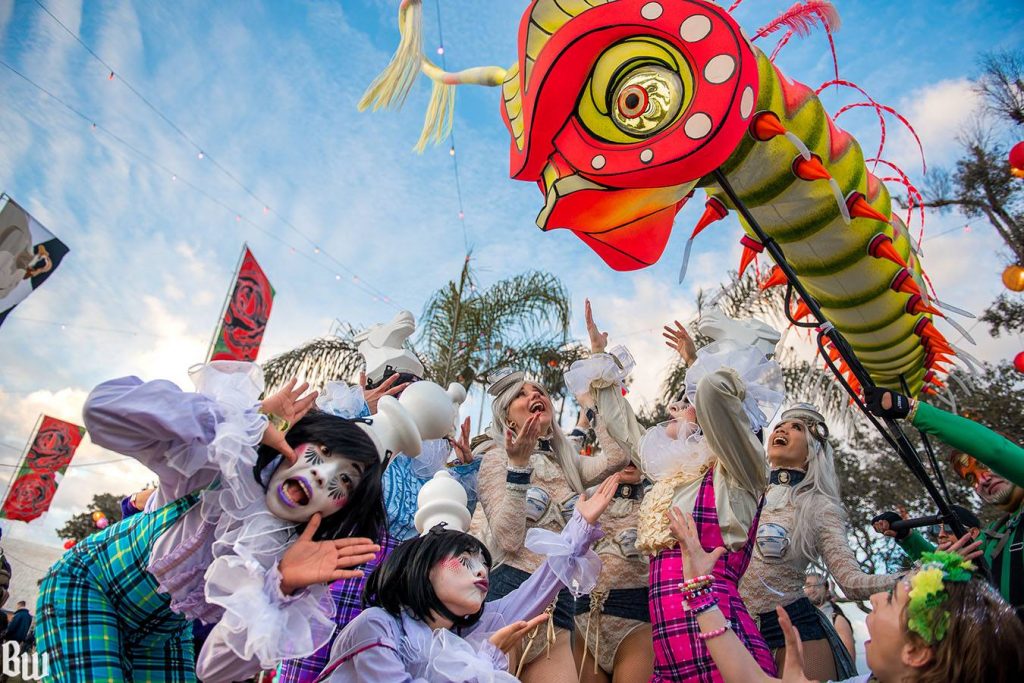 Man’s footprint after festivals is what fuels several arguments against the event taking place, including public officials who consistently speak out against having events in venues across California and beyond. Insomniac paid special attention to that this year with their Earth Emporium booth. Essentially, a fan could head over to the booth and agree to pick up recyclables and trash around the festival in exchange for some swag. Not only could you get free goodies, but you could do so while helping keep the world clean and showing the world our community means no harm when they come through to have a good time.  If you missed out, we highly recommend finding them at the next Insomniac event you head to. 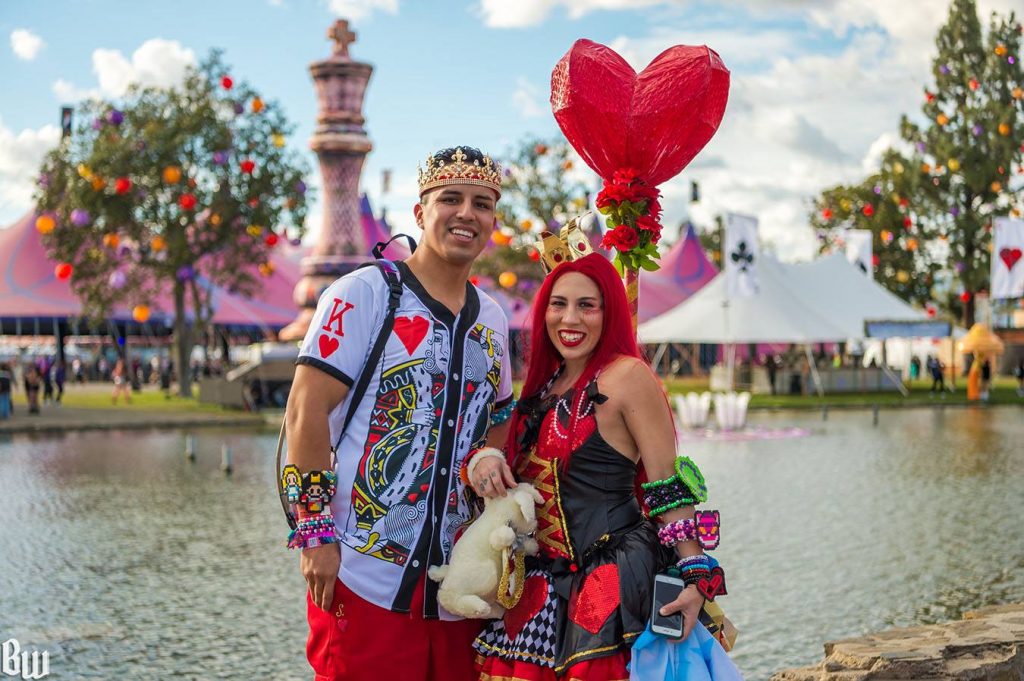 Many say there’s an intangible quality that comes from Insomniac’s events in particular, but we think the magic you experience is easily measured: it comes from the amount of fun you see others having from start to finish at a given event. Through the years of attending Wonderlands of any kind both at this venue and at San Manuel, this natural joy is consistently present whether you’re in the crowds or when walking from point A to point B. 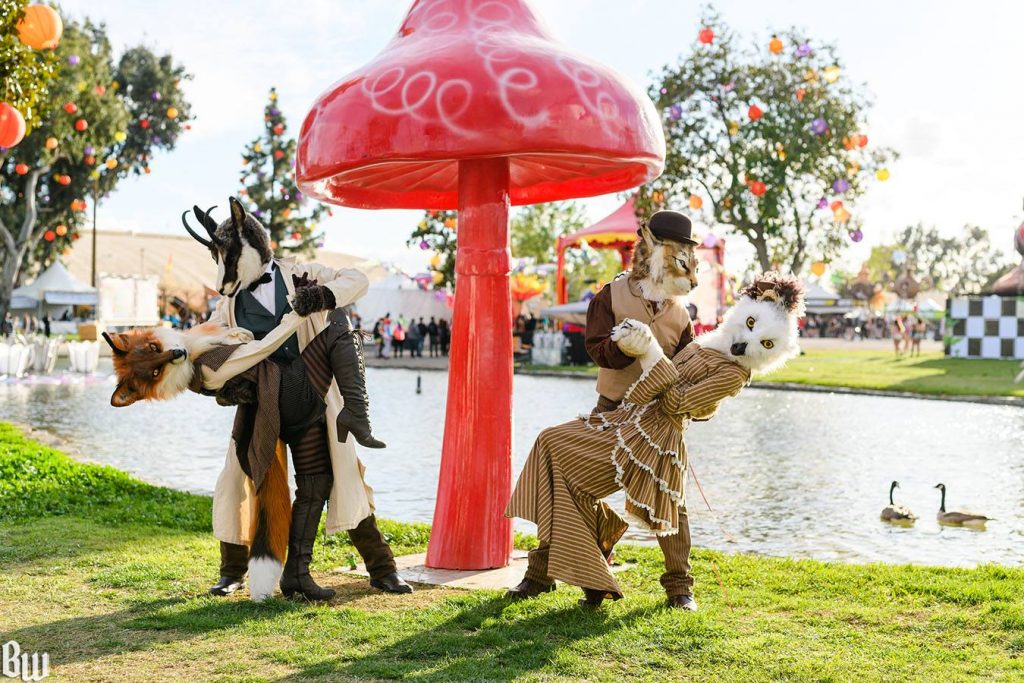 Revelers from several parts of the country came in droves, a sizable chunk of them with outfits that rival the performers. Not only that, but the concept of Kandi that gets a bad rap from social stigmas(and in some cases, actions from individuals in our own community) is celebrated as an expression of personality. These are the fruits of Insomniac’s labor in fostering community outside of their festivals. The promoter’s weekly Night Owl Radio and consistent stream of news on their website are just a couple of examples of their 24/7 job in being a hub for fans to congregate. The vast majority of fans at beyond knew exactly why they were there, and it made the event feel more like a family reunion than anyrthing else. 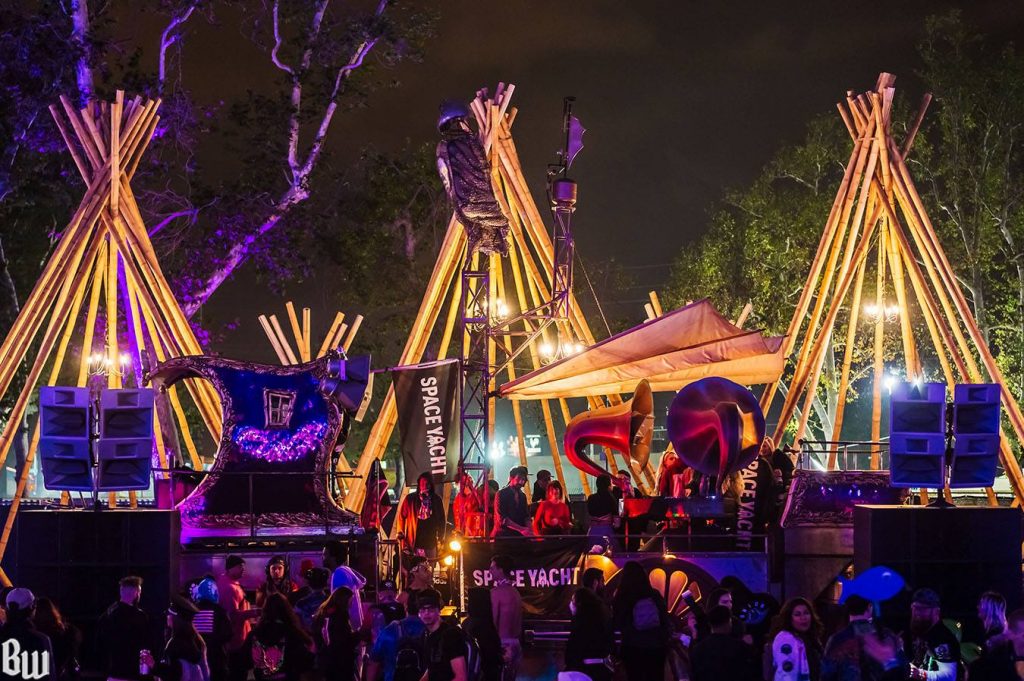 Beyond Wonderland’s newest upgrades help solidify what we think about the festival as a whole; it’s still the best first taste of the season in the West. Insomniac’s lazer focus on top-notch production, a diverse musical experience, conscious initiatives and fan satisfaction shows in all of their events, so naturally they end up being the perfect setting to welcome towering speaker stacks again. We can only be thankful that a show this big and extravagant still carries some of the vibes that started Dance Music’s rise to prominence in the first place.

What were your favorite moments of the weekend? Tweet us @Globaldanceelec.