The multi-stage camping music festival officially has a 2019 line-up — and it has quite the eclectic assortment of headliners.

Childish Gambino, Post Malone, The Lumineers, and Phish are among those who were listed in the Tuesday morning announcement of the 2019 Bonnaroo line-up. Held June 13-16 in Manchester, Tenn. (60 miles outside Nashville), Bonnaroo is bringing a wide range of music to the 18th annual festival at Great Stage Park.

Childish Gambino (otherwise known as actor Donald Glover) will headline Friday night with the American rock band Phish, who will also play two sets on Sunday, performing a late night set. Saturday night welcomes Post Malone and Odesza as headliners, while Sunday brings the return of Phish and The Lumineers.

Other featured artists include Solange, The Avett Brothers, Hozier, Kacey Musgraves, Walk the Moon, Cardi B, Brandi Carlile, and The Lonely Island.

With music festivals ever-popular destinations for musicians, Bonnaroo offers up some of the same artists as Coachella, who announced their 2019 line-up for the April festival the first week of January. Childish Gambino has been tapped to headline both festivals, while Solange will also play at both events. Fans are clamoring to see Childish Gambino, however, given that Glover has said he plans to retire the rapping alter ego after his upcoming fourth studio album currently in the works. 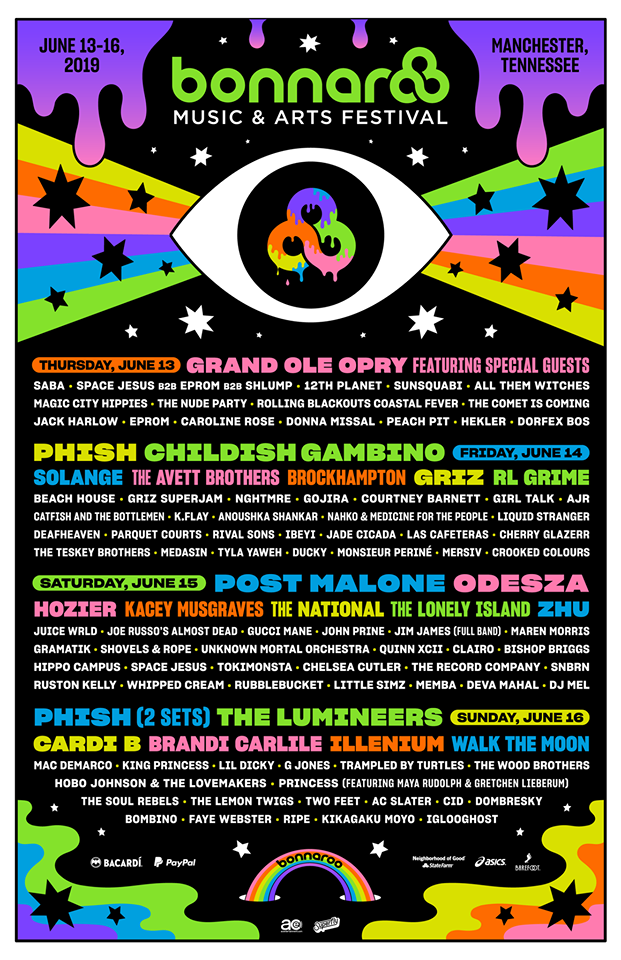