Eric and Gordon(Rick and Gordy if you traverse their twitter) have always been known to dirty up dance floors with their tracks as their collective moniker Botnek. While they are known best as sound design junkies who craft quirky non-directional releases, their latest EP takes a sharp left and addresses the topic of social media and it’s effect on us. We had a chance to speak with them about “Connecting?” and hear what they had to say on several elements of the EP.

Alongside the artwork of “Happy Hour” and “KRMT,” you’d agree that “Connecting?” takes on a bit of a darker tone. We asked about their process of finding Kitten Janae, the artist responsible for all three cover pieces. “we thought her art worked perfectly with that concept— a mannequin style, not human, not digital, just like…a weird soulless character that would embody what this EP is about,” Gordon explains. “We would give her an idea and she would give us like 6 versions a day.”

On creating the unique lyrics for the EP

When you think of how people write lyrics, singers and rappers have their traditional best practices. When it comes to something as interesting as Botnek’s Tinder nod “Losing My Mind,” though, the two conceived their idea via unconventional means. “There was a Placeholder sample, and we really liked the rhythm of it but didn’t want to try and clear it, so we were like ‘let’s just think of our own lyrics.’ says Eric. “We were like “If we’re going to have someone redo the sample, we can think of whatever lyrics we want…I have a friend with a great voice who nailed it in one take, I swear to god the whole thing took about 15 minutes.”

The organic technique these two brought to the creation of these new lyrics is a testament to their creativity in every respect of their music, and said words are given more life in the official video for the single.

On who’s the baddest bitch of them all

We had to ask the duo who(other than Hillary Clinton) they consider a bad bitch in their lives. The two have said in the past that the song is based on the Instagram sensation, but we let them define “bad bitch” themselves for this question. “I have a friend on Facebook named Pam,” Eric says, “and I think she’s the baddest bitch I know…I think the song is half about her.” Gordon, on the other hand, gives props to the bad bitch who raised him: “I’d say my mom: she RUNS this house.”

On using April Fools Day to their advantage

We knew we were a bit late on this, but we had to congratulate the guys on their initial announcement of their first Single “Clickbait” on April Fools Day. The joke ended up being an opportunity they say they were very excited to take advantage of. When asked about who’s ever fooled them, they talked about two of their own peers. “One year, Felix Cartal did this whole thing where he made it seem like he was getting his logo tattooed on his back, I actually believed it and was like ‘what is he doing??'” They also recall Henry Fong taking advantage of the festivities: “he didn’t post this on the internet, but [Henry] sent a photoshopped picture of him with a bald head to his manager, and his management called him freaking out, like ‘bro, that’s your BRAND, what have you done!?'”

“Clickbait” came at a perfect time, easily standing out in Night Owl Radio’s EDCLV Lineup announcement megamix with the “Kim Kardashian is dead” line. The track ended up drawing in a host of unique fans and plenty of friends to the duo’s set at the Motor Speedway, inspiring them to have a lot more fun with it. “We had a set planned, but we decided to just go crazy and play whatever. Definitely a highlight of the year.” 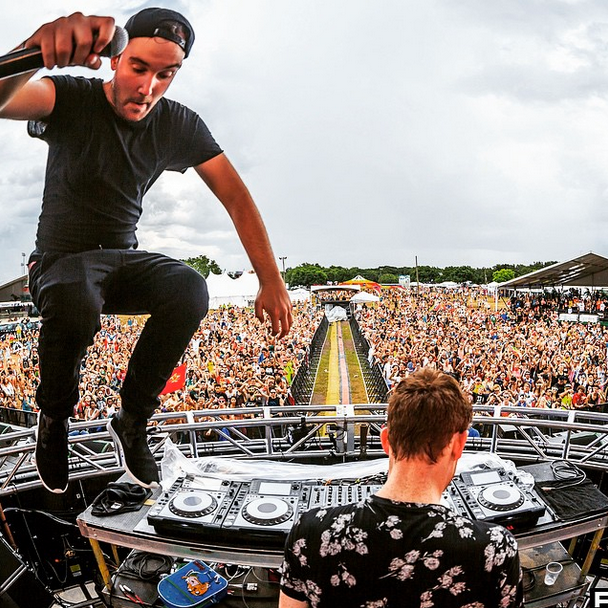 The year has already been riddled with highlights for Botnek, and they aren’t done with the year by a longshot. “we have so much new music to come, and more collabs with Snails coming.” On the heels of their first full thematic EP, they say they’ve been focusing on more fun tracks this week. Though they don’t thin they’re going to go “full concept on the world,” they wouldn’t rule out the possibility of a “Connecting? Part 2;” especially since Pokemon Go conveniently released after the fact. Eric laments on the timing of it all: “I knew our EP was done, and then I saw this like ‘Goddamn it, this is a perfect example of what we’re addressing.’”

Gordon: I actually haven’t played yet.

Gordon: I don’t need another thing to take over my life at the moment. (Laughs)

While there are plenty of new shows they know are coming up, they need to keep that news waiting in the wings for now. We’re sure that when that information comes, though, we can count on a shocking headline about Olympic cheating conspiracies somehow involving Obama linking us to the news.

Connecting? Is out now on Dim Mak. If you want to see more of Botnek, check out their set below from Dim Mak Studios.