Radio Hill – a brand new collective of Los Angeles-based concert producers, festival planners and talent curators – alongside local partners KCRW, The Well, Space Yacht, and DoLA, announced the debut of, “Skyline: Art, Music, Food.” The 21 and over event will be the first major music gathering to take place at the recently remodeled Los Angeles State Historic Park since 2014. On Saturday, May 20, 2017, Skyline will reintroduce a metropolitan music experience to the bustling Chinatown community, highlighting a new generation of influential artists from a wide array of electronic genres. Acts scheduled to perform include Miike Snow, Duke Dumont, Lido, Eden, Michl, Elohim, and Jason Bentley. Tickets will go on sale tomorrow, Friday, March 31 at 12 PM PT at RadioHillEvents.com.

Skyline will host a lineup of craft food vendors from all over Los Angeles in addition to a selection of LA-based artists who will display interactive installations throughout the park. Creative collaborators will be announced in the coming weeks. Skyline will encourage neighbors near and far to travel by metro or ride share to keeping the event green.

Located in the Northern half of Chinatown, Los Angeles State Historic Park had shut down for renovations in April 2014 and is set to officially reopen to the public late next month. Skyline will celebrate the efforts that went into creating a destination that offers modern amenities, beautiful views, and ample green spaces for residents of the immediate community, as well as the greater city of Los Angeles.

Radio Hill is named after Radio Hill Gardens, just north of Chinatown in the Solano Canyon Community. Skyline: Art, Music, Food is a 21 and over event. Tickets will go on sale Friday, March 31 at 12 PM PT at RadioHillEvents.com. 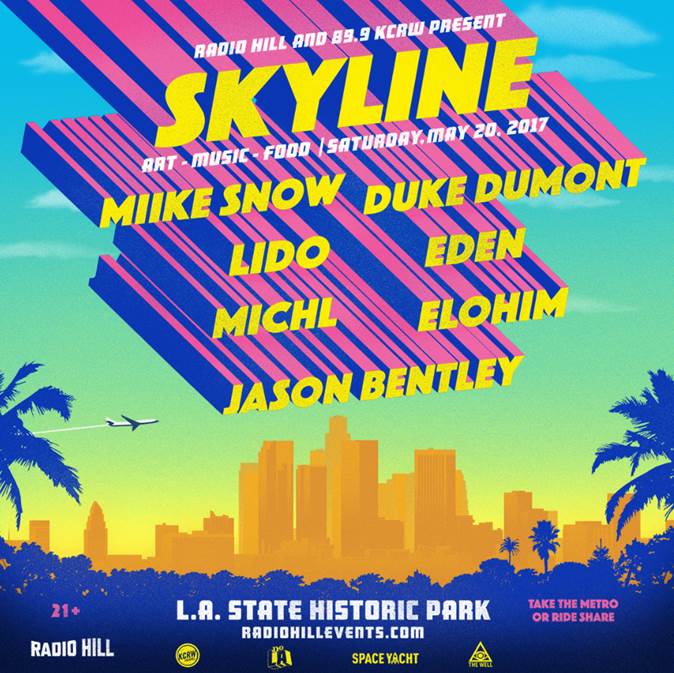