Future Primitive’s 2020 calendar looks to continue that distinctive path. Kicking off the season will be the fifth anniversary of Guy Gerber’s Rumors in Chinatown. This was the party that really opened up Gin Ling Way to many in the city, and serves as the kick-off to much of the West Coast’s summer party season. With demand for this party growing year on year, who knows what might be next for Rumors LA, but this summer Gerber welcomes back his brother in arms DJ Harvey to join him for what’s become an LA institution in Chinatown.

Jamie Jones’ Paradise In The Park is another pioneering party from Future Primitive, which launched in MacArthur Park, before heading to Grand Park last year. This May, Paradise expands to two days, and will take over one of LA’s most impactful locations, the urban heart of Downtown, Pershing Square. Dancing under California skies in the middle of LA is a delicious proposition, especially when curated by one of dance music’s most discerning tastemakers of the last decade, Jamie Jones. Future Primitive and Jones will be going all out, bringing in a unique production and lighting team to create something truly memorable for Los Angeles.

DJ Tennis has emerged as a global force in the last couple of years, which comes as no surprise to those who have been following the Italian’s career and his Life and Death imprint. Tennis is a man of exquisite musical taste, and the brief for his now annual LA party is simple, choose whomever you most want to play with in the world. He’s DJ’d alongside Dixon, and last year brought Acid Pauli for a rare LA performance, this June he selects Running Back founder the iconic DJ, Gerd Janson, to join him in Chinatown. You’d be hard-pressed to beat the pairing of these eclectic selectors.

Rounding out the Future Primitive season will be the only West Coast performance from Keinemusik. The Berlin label and collective has been on an incredible run. Their music oozes dancefloor savvy, its irreverent but considered, and totally unique. The core trio of Adam Port, Rampa and &Me are one of dance music’s most of the moment crews, yet it’s been a slow burn, as the label celebrates its ten year anniversary this year. There is a perfect weight of momentum behind their sound and skater punk aesthetic, Keinemusik are proving they’re undoubtedly some of electronic music’s most exciting and interesting DJs and producers.

Future Primitive is based in LA and creates events and experiences with some of the world’s most exciting electronic music talent. Future Primitive has created events with Innervisions, Guy Gerber’s Rumors, DJ Tennis, Jamie Jones’ Paradise, Lee Burridge’s All Day I Dream and many more. 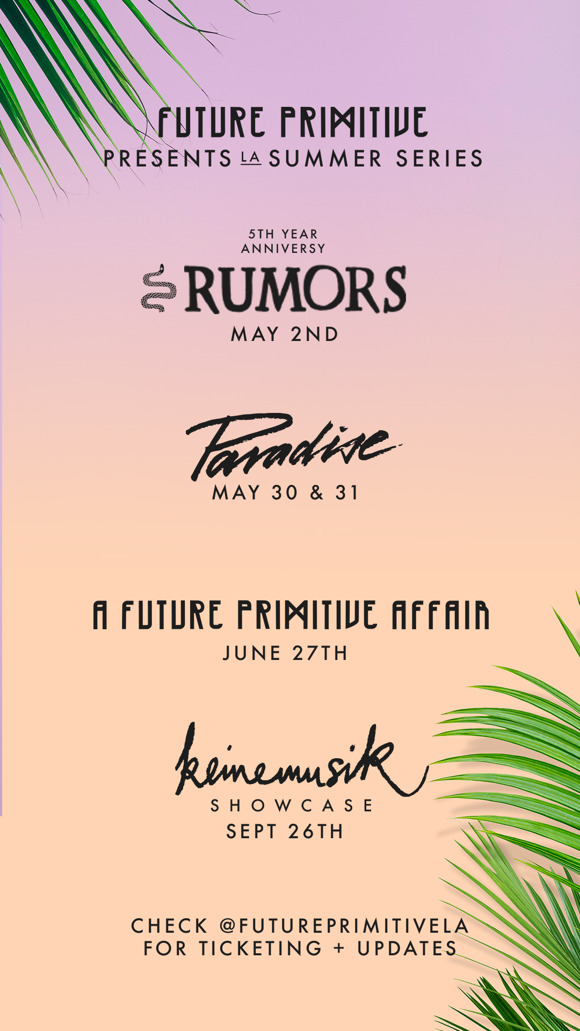