Insomniac announces their lineups more creatively than anyone else in the country, and arguably the world. They released their EDC lineups via Rotella’s Megamix in 2016 & 2017, and just recently they handed out playing cards with the artists who would be playing at this years Beyond Wonderland. Today, several fans got word that the ever coveted EDC Vegas Lineup 2019 box would be arriving at their doorstep this Friday (Tomorrow) as they were originally going to be shipped out in April instead. A fan of GDE brought this to our attention and got us thinking if the EDC Vegas Lineup will be dropping soon? Last year, Insomniac revealed the 2018 EDC lineup by sending out Valentines Day candies with the DJs written on them. Considering the ship date, that same creative and delicious reveal may happen again. 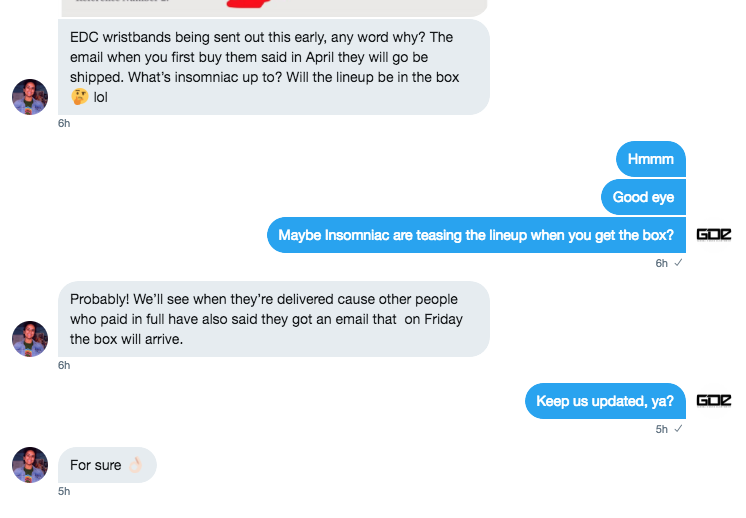 Get your EDC Vegas 2019 passes NOW cause these will go up on Tier or worse, sell out when the lineup drops. Stay tuned and let us know what YOU find on Twitter @GlobalDanceElec.

@EDC_LasVegas wristbands being delivered this week?? Will the lineup be in the box or what? Why is it being sent this early? Lol pic.twitter.com/9QyeyPvyJi

got an email from UPS about shipment notification from Front Gate Tickets… @EDC_LasVegas box coming by Friday?!!? 👀🎉

Did I really get an email saying my EDC box arrives on Friday???

People are getting their edc tickets shipment tracking emails already?? The lineup hasn’t even dropped? I got my box last year a WEEK before edc😭