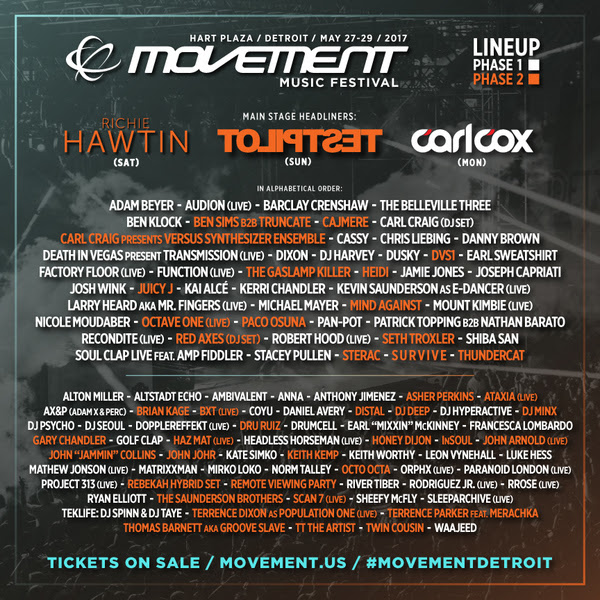 While Memorial Day Weekend annually boasts a variety of festivals around the country, there’s only one place to be for those souls deeply rooted in techno and house: Movement Electronic Music Festival. Hosted in the beautiful Hart Plaza of techno’s hometown Detroit, the three-day festival has been named Festival of the Month by Resident Advisor for 7 consecutive years.

2016’s stacked 10-Year Anniversary lineup left one to wonder how the festival’s organizers Paxahau Events might compete the following year; but the revealing of Movement’s 2017 Phase 1 Lineup left no room for disappointment.

Included in today’s announcement of 70 acts was Monday’s headliner: the legendary Carl Cox, who just played out the end of an era with his residency at Space Ibiza.

“I am really looking forward to coming back to the home of techno. It’s been a few years now since I was there last, but I can finally say, I am coming back. I always have so much fun, with my DJ peers and the party people. I cannot wait to rock the dance floor once again.” – Carl Cox

Breaking their long-awaited hiatus is Detroit’s iconic and influential originators are the Belleville Three, a super techno group comprised of Kevin Saunderson, Juan Atkins, and Derrick May. The three individuals on their own are largely responsible for shaping Detroit’s thriving dance music community today,

Also on the bill are numerous live acts, including Recondite, who just earned a slot in the top five of Resident Advisor’s top live acts chart of 2016. Movement 2017 will also bring Soul Clap’s debut as a live band and other live experiences such as Mount Kimbie, Matthew Dear as Audion, Kevin Saunderson live as E-Dancer, Death in Vegas, Robert Hood, Function and Factory Floor.