NGHTMRE’s rise to the top has been a dream to say the least. Some say he arrived the day Skrillex played his single “Street” on the main stage at Ultra Music Festival in 2015 – dance music’s premier event. The record would go on to be one of the biggest trap song that summer, and lead Tyler Marenyi to become the darling of Diplo’s Mad Decent imprint, an international festival superstar, and a resident DJ at Las Vegas’ famed Hakkasan.

His 2016 collaborations with Zeds Dead, Dillon Francis, and Flux Pavilion helped catapult him all across the world, playing Tomorrowland in Belgium, Storm Festival in Shanghai, Looptopia in Taiwan, and World DJ Fest in Seoul. Tyler also embarked on the 34-city “Gud Vibrations” bus tour with best friends Derek and Scott of Slander that winter, selling out venues such as the Skyway Theatre in Minneapolis, the Rex Theater in Pittsburgh, Rams Head Live in Baltimore, and The Ogden Theatre in Denver.

NGHTMRE’s name continues to make waves in 2017, starting with a headline tour through Australia and New Zealand. A staple in the festival circuit, Tyler can be found on renowned stages, such as EDC Las Vegas, Electric Zoo, and Lollapalooza installations stateside and internationally. His recent releases “On the Run” and “The Killer” explore different sonic territory, while maintaining his signature NGHTMRE sound. More from his EP with Mad Decent is on the way. If you want to support someone who is at the forefront of creativity in electronic music, NGHTMRE is the name you want to follow.

Join us on Wednesday, November 21st in San Diego for NGHTMRE’s ‘NGHTMRE Before Xmas’ Tour Stop at The Observatory North Park. Tickets are on sale Wed. Sept. 19th @ 10AM. 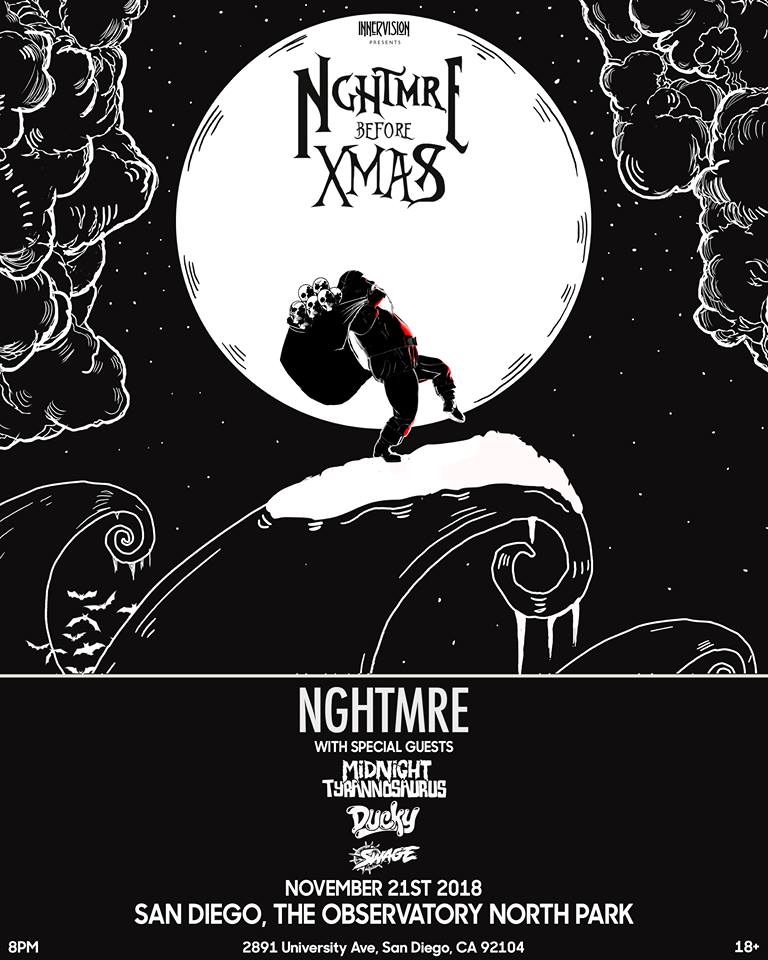