Sacha Robotti, a dance music favorite, has recently kicked off his spirit animal theme tour, AcidSloth. The German-Italian, LA-based DJ/Producer attributes his recent success and fame to the record and family backing of Dirtybird and Desert Hearts. Sacha will be stoping in multiple major Californian cities, Austin, Detroit, Phoenix, Brooklyn, Denver, and more on his AcidSloth tour. We managed to catch up with this ambitious and evolving dance music figure right as his tour kicked off. Find out more about what AcidSloth is and some more fun facts about who Sacha Robotti is.

GDE: Your SlothAcid tour has just kicked off a couple of weeks ago, how has the tour been going so far and how much planning did it take to get this project started?

Sacha: My SlothAcid Tour has been going really well! So far I played support shows with Chris Lake and J.Phlip, as well as Nocturnal Wonderland which was epic. It took a lot of planning and focus, thanks to Dirtybird and my team who set up this tour for me!

Sacha: Since I’ve used a sloth logo for my warehouse parties in LA this past year, the sloth has become a spirit animal that has been increasingly associated with my artist persona. Sloths are an endangered species and are friendly, chill creatures who like to sleep a lot and seem to live happily in the moment—qualities I can relate to, especially today in our performance-driven society. The legend goes that magic sloth candy blew minds during my set at Desert Hearts Festival 2017, after which I started using the term “Slothacid” to describe the style of electronic music that I like to play out at festivals and clubs: a mix of groovy, emotional, weird, psychedelic music with tough beats that hopefully will take you on a journey through spacetime.

The west coast seems to give you a lot of especially with the backing of Dirtybird and Desert Hearts, can you shed some light on how you were able to connect with both of these hot dance music labels?

Sacha: I’ve been a Dirtybird fan since the second release of the label, I think that was around 2006. Throughout the years I’ve supported that sound in clubs a lot and connected with the artists, sending demos to Claude Vonstroke as early as 2008. The first birds I met in person were Christian and Justin Martin in Miami and in Europe, then gradually I introduced myself to the rest of the crew. In 2012 I released my first track on Dirtybird, called “The Major” featuring vox by DJ Rush.. Dirtybird is one of the main reasons I’m living in California now, Barclay was very supportive of my move there. At the first Dirtybird Campout a couple of years ago, I met Mikey Lion who played after me. This ultimately sparked off my connection to Desert Hearts and my collab with Mikey for their label! The idea of the EP “Ol Dirty Hearts” was to create a mix between the sound of both Dirtybird and Desert Hearts.

You’ve been living in Los Angeles for a little over a year now, what sparked the move to Los Angeles out of all the places in the world, where dance music has also thrived?

Sacha: The climate, Dirtybird, some dear friends I made in LA, and a craving to change scenery to find gold in California.

How do you balance the time between your own music project and your Robosonic project with Cord Henning Labuhn?

Sacha: Robosonic started off as the sum of both our solo DJ names, “Robotti + Schall’ (aka “sound”). We had a great run together for over 10 years, Beatport hits fusing house music and hip hop got us out of Berlin onto the world circuit. I think we played something like 1000 shows in 40 different countries. To be honest we had a bit of a difficult split with Robosonic when I left to Los Angeles, so for now only my partner Cord is pursuing the project, while my name and “legacy” remain in the project.

You have an interesting backstory where you were an architect in Afghanistan way back in 2005 that you credit with pushing you towards a DJ career. What force of motivation pushed you to shift from your work in architecture towards a career in music?

Sacha: In Afghanistan I wanted to test out how I would perform in an extreme environment, it was like an endurance test that I subjected myself to. In Kabul I realized that I wanted to do something in my life that I have a passion for! I liked architecture, but I didn’t love it as much as I love music. It was more of a “reasonable” career choice to get into building houses, than it was fulfilling. I was always into both art and music, but music won for now I guess.. 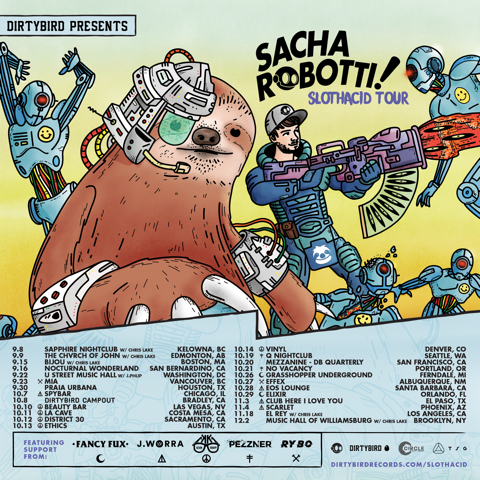