When looking at today’s climate of Dance music as well as the many individuals who have been inspired to create and share, it’s become more of a best practice to shorten the pregame and get to the club early for the opener. Young Bay Area artist Zima has many a time been the reason people flock to start their night at the venue ahead of the headliner at venues like San Francisco’s Love & Propaganda, Las Vegas’s Azure Pool, and Avila Beach ahead of Above & Beyond’s set in 2014.

His work in the studio has been signed to Insomniac’s Discovery Project releases and Diamond Blu Records, among others. Today sees him unveil the first of many beats inspired by the changing climate of his hometown, entitled With the Seasons. We had a chance to speak to him about these upcoming tracks and learn more about what makes him the confident artist he is.

So how did your journey as an artist start?

I started DJing when I was 15 years old; I got a controller for my birthday after seeing my friend get one. I went home and said “mom, i want to do this.” So then I just started practicing in my bedroom, and my friends started hitting me up for parties. My first gig was a sweet 16. Open format, top 40, that kinda stuff.

After that I got in touch with guys who wanted to throw underground parties, parties in places like warehouses and art galleries. When I was 17 I entered a Beatport Remix Contest for Tim Berg’s “Seek Bromance.” I didn’t win but I sent it to Freefall AKA James Smith, who sent it to Dylan from K Theory, who at the time was the talent buyer at EPR. He said it was sick and I got booked in the front room.

A year later I landed a residency at Ruby Skye, which I had for about three years. I think that club helped shape me as the DJ I am today just because I’ve opened for so many different types of acts and crowds that I understand the significance of an opening and closing sets. I’ll stay all six hours and watch every DJ play.

What are some important lessons you’ve taken with you with your experience playing as an opener?

I think you need to do your research and find out what kind of club youre playing, like who’s before and after you. You have to play with the crowd.

In my younger days I would let my ego take control like “Oh these guys are loving it,” and go a little over the top. So that’s a major key: leave your ego at the door.

Tell me a little bit about this project; how did it start out?

I think it started off with me just being bothered by the fact that I haven’t released a lot of music and theres nothing worse than going through the demo submission cycle where you submit a song and wait for weeks or months for a response. Sometimes you get no response at all.

I have confidence that some of these songs are really good, and part of it is me being impatient and wanting to reach out and put my music out there. I’m very sensitive to the seasons- not that im depressed or anything, but nobody else has done this idea of making diffrent songs for each season.

The first song on the summer collection is called Alameda; and that’s where I grew up! So it’s kind of an homage to this town and explore what my feelings sounds like when I’m in a content and happy mindset.

Do you find more inspiration to make music when youre outside walking through the city or inside reflecting on it?

You know whats funny? I get more inspiration when I leave Alameda. I go to diffrent cities, experience diffrent cultures, and realize how fortunate I am to live in such a diverse, open minded, ideal town. It’s literally in the center of everything. 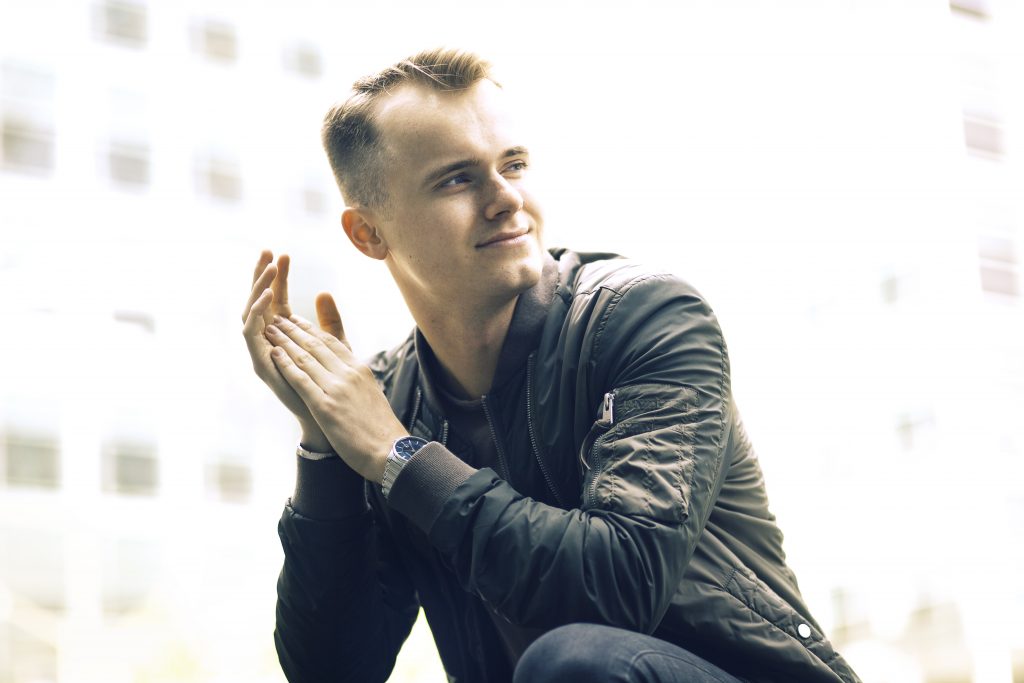 When you’re producing, what are some habits you have to keep yourself consistent?

I’ll definitely save my presets, and some precussion samples that I like. I think that’s important to have some kind of consistency in your sound to brand yourself. As far as arrangement goes, I try not to repeat that. I think it’s important to find the perfect balance between repetition and going against the grain.

Who are some artists who you see yourself remixing?

I’d love to remix Moby, I feel like we have a similar sound, vibes, and emotion. Go would be a cool song to remix…there’s also a few tunes off his Destroyed album that I like, like Rockets. He based that whole album off of vibe he got sitting at an airport at about three or four in the morning by himself, and you can really feel that in every song. Very desolate and ambient.

Where are you interested in going with your career from here?

I don’t want to be to popular, but I don’t want to be too underground either. It goes back to what I said about balance; I think guys like Hot Since 82 do a really good job of hitting that mark. He has a couple Beatport top 10’s, but he’s at a point where he’s not completely mainstream.

Zima’s new track Alameda will be a free download on his Soundcloud. You can follow him on Facebook to get more updates on his music and get a taste of his DJ skills with his set at Beyond Wonderland below.