Swedish House Mafia is making EDM news, as we all wait excitedly to see what comes out of Creamfields 2019. Their UK appearance comes at the tail end of their reunion tour, which kicked off in 2018 when they reunited at Ultra Miami.

After Creamfields, Swedish House Mafia heads to Lollapalooza Berlin, and then Singapore, after which their schedule remains to be seen.

Those of us in the States, especially those of us who were not at Ultra last year, are hoping for a USA tour. While nothing has been announced, coming to the States next seems to be the logical next step.

The hope level has risen thanks to Instagram. On Axwell’s post thanking Austria for a great show at Frequency Festival, one Instagram user energetically asked when the trio was coming to the States. He ended his comment with, “Do a stadium tour brothas!” Something no one would be opposed to. Axwell replied to the comment with a simple, “yes!” While this is nowhere near a confirmation, it gives everyone in the U.S. hope that Swedish House Mafia’s next step is going to be right here. 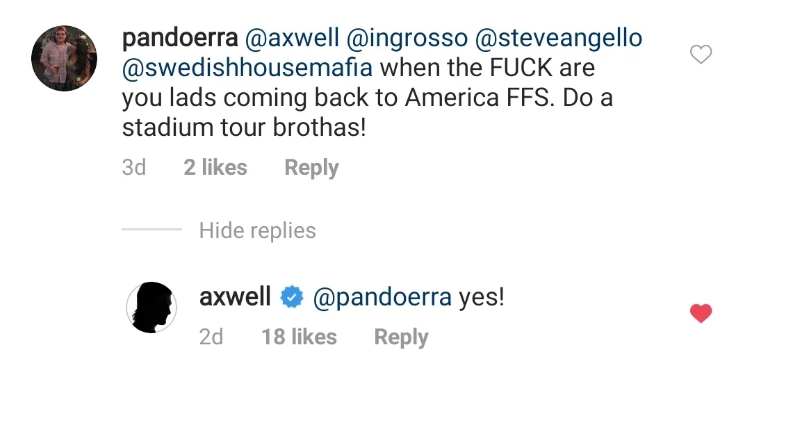