A big reason people love Lorin “Bassnectar” Ashton is that he is genuine and upfront about how he feels. His latest exchange on Twitter proves just how unfiltered he can get. The spark to the e-fire was Ashton’s brief message this last Saturday: he said “Jesus hates Republicans” while retweeting a message for people to vote. One fan, in particular, was not happy with it: 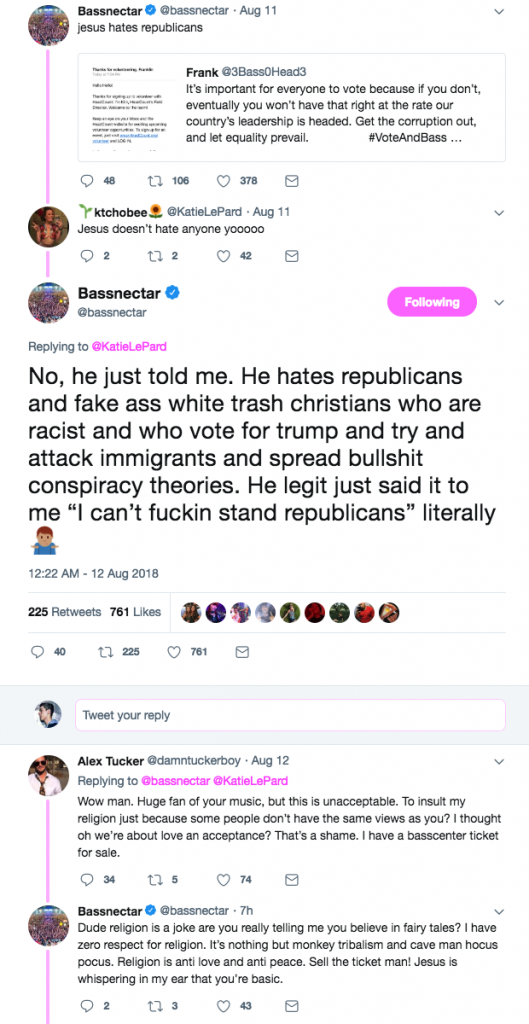 Ashton’s lack of fucks made sense to all of his longtime fans. For those new to his thoughts, he clarified his stance again a little later:

What I personally won’t tolerate:
Homophobia. Racism. Political corruption. Social Injustice. Bullying or mean behavior. Ignorance or religion or right wing nonsense. Standing up to a bully or shutting someone down who is trying to lie or spread nonsense isn’t mean. It’s powerful

I don’t think so. I think only a petty drama queen would jump to conclusions. And if I “lost a fan” who disagrees with me then so be it. I ain’t out here trying to get fans what a wack life that would be. If you look @ what I’ve said for 20 years, and still misunderstand then bye https://t.co/OvRYdCTl0K

People are bound to disagree on the style in which Ashton communicates his views, but his consistency and audacity makes for good conversations.

What do you think of this exchange? Tweet us at @GlobaldanceElec.