Insomniac announced the return of Beyond Wonderland 2016 to Southern California, Friday March 18 and Saturday March 19, 2016 at the San Manuel Amphitheater & Grounds in San Bernardino. Beyond SoCal will transport guests into its beautiful dreamscape for the entire weekend with incredible music, interactive art installations and the return of expanded campgrounds and turnkey camping amenities for guests.

Insomniac will use the vast grounds to create a new world inspired by the whimsical nature of Alice in Wonderland. Four incredible stages, from the Queen’s Domain to the Cheshire Woods, will host sets from the biggest talent in dance music today, to be announced in the coming months.

Every night after the festival, fans can once again sleep under the stars by joining the enthusiastic community of the Beyond Wonderland campgrounds. Acres of decorated grassy fields will play host to thousands of campers as they enjoy day and night entertainment, from morning yoga sessions to Silent Disco parties until sunrise. Tent and RV camping spots will be available as well as incredible turnkey camping options that include safari style tents, fully furnished accommodations, memory foam beds and more. Further information on camping options and turnkey packages are available at BeyondWonderland.com.

Over 70,000 fans explored the grounds of last year’s Beyond Wonderland SoCal, dancing to sets by more than 60 of the world’s top dance music artists across four breathtaking stages. Theatrical performers, dancers and stilt walkers were dressed in elaborate costumes while otherworldly art installations stood at over three stories high, illuminating the night sky.

Beyond Wonderland 2016 Tickets: Two-day general admission and VIP passes, for those 21 and over, start at $149 and $329 respectively, plus service fees. Camping passes are also available for purchase.

Beyond Wonderland 2016 Lineup: TBA (Comment Below With Your DJ Wishlist) 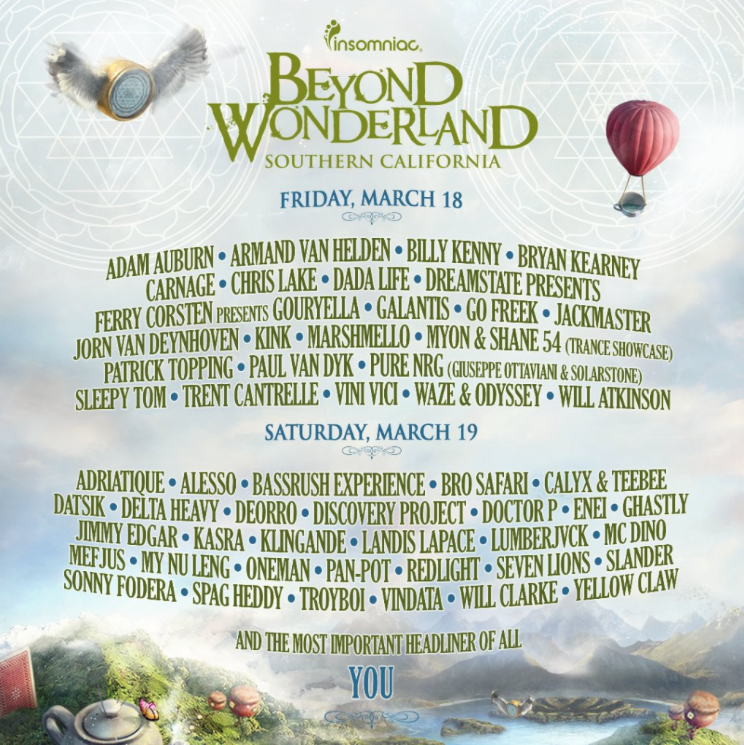