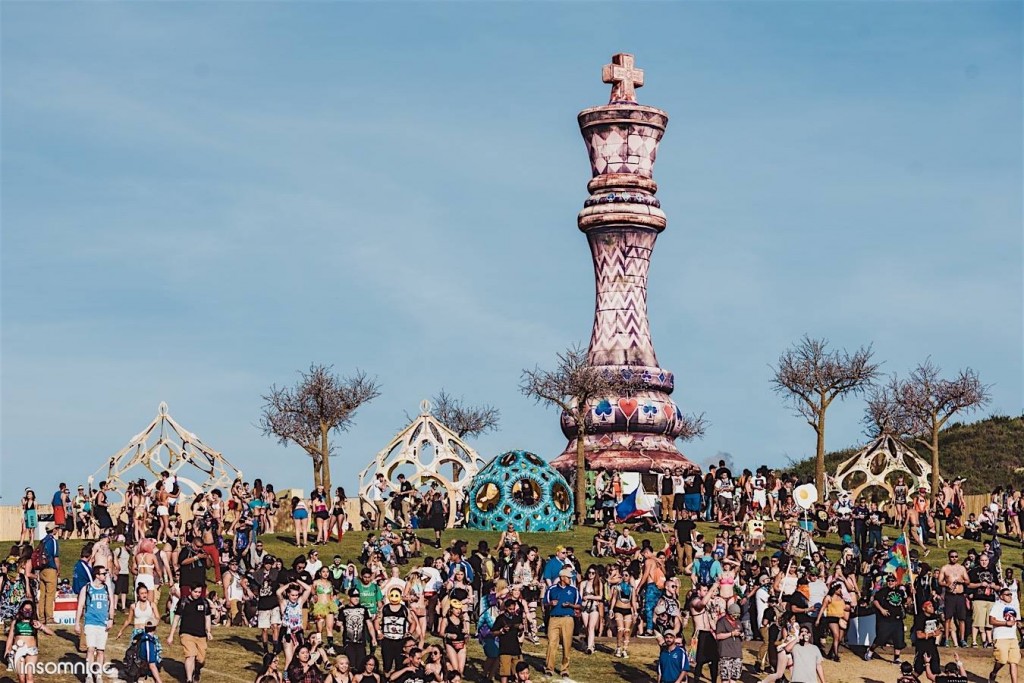 A giant chess piece on the horizon signaled the end of a long awaited road trip to Insomniac’s Beyond Wonderland Festival in San Bernadino. The 2 day experience had its 5th anniversary this year, and the milestone celebration demonstrated a serious evolution from its beginnings as a series of white tents at the NOS Events Center. To those who are skeptical of Insomniac from the outside looking in and even to some regular attendees of the California promoter’s shows, Beyond is the same show, different season. We can see where that assumption may have come from before, but a good perch on Lookout Mountain over this Beyond is proof enough that this is an experience all it’s own. 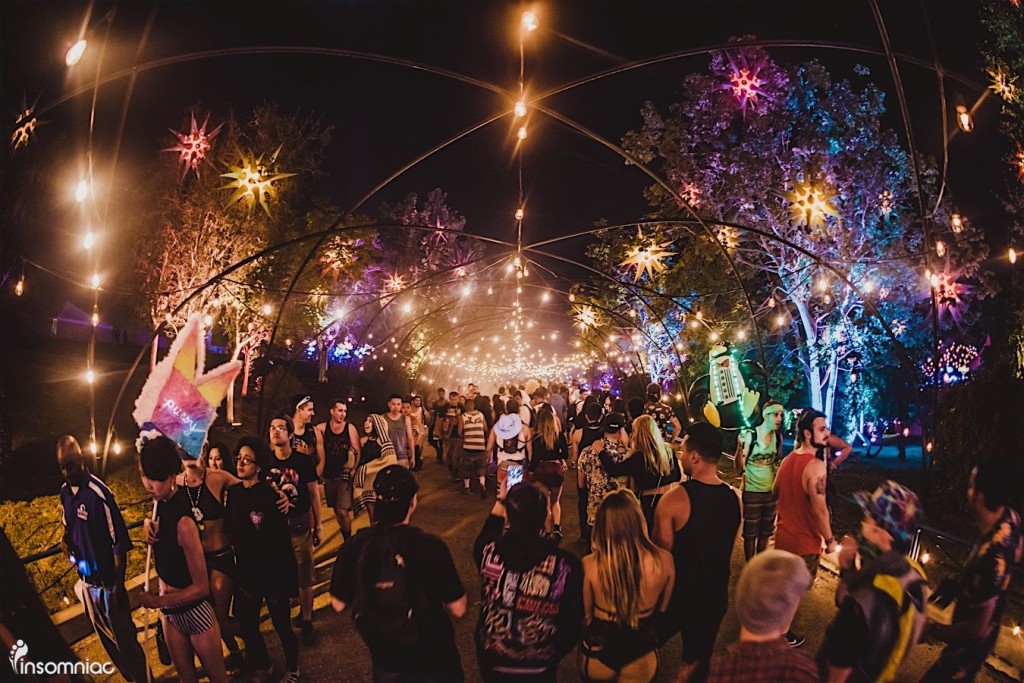 This time around, Beyond proved to have the most thematic focus and make it’s distinction among its sister events. While past wonderlands featured the takes on Alice in Wonderland that we’ve come to appreciate, this rendition carried a focus on the otherworldly, the centerpiece being a mythical eye with wings. The San Manuel Amphitheater had never received quite as much of a makeover as this weekend, with a dramatic section of it blocked off and only one entrance to the venue. This may have been frightening to see on your phone on the couple of days before showing up, but upon walking in and immediately passing through a curated tunnel experience with lights, sound, and fog, the method behind the madness was discovered. The view in front was disguised with wonder, and the scenic view to the right encouraged quite the speedwalk. 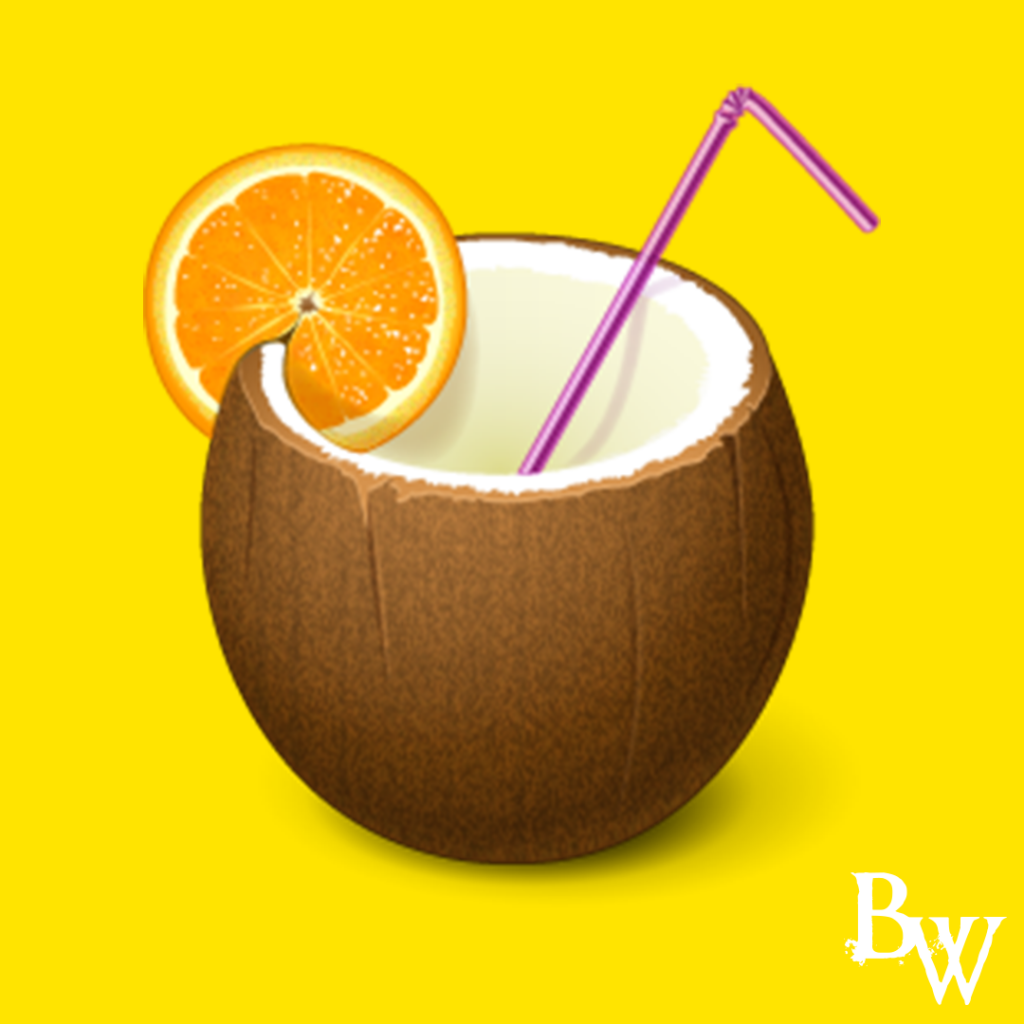 ​While taking said epic walk, your first thought probably went to scarfing something down. Be honest. The eats at Beyond were impeccable this year, kicking the stereotypical overpriced chicken nuggets and burgers in the butt. Such vendors as Middle Feast and Downtown Dog(sporting a delicious Chili Cheese Fritos concoction called “Trailer Trash”) were immediately followed by a half-come, only cured by dancing about. To top that off, Insomiac provided spiked coconut water in real cocuntuts that carried artistically crafted initials of the festival. It’s still a challenge to think that an American music festival didnt rob you, but lo and behold, stomeches were fed with quality. 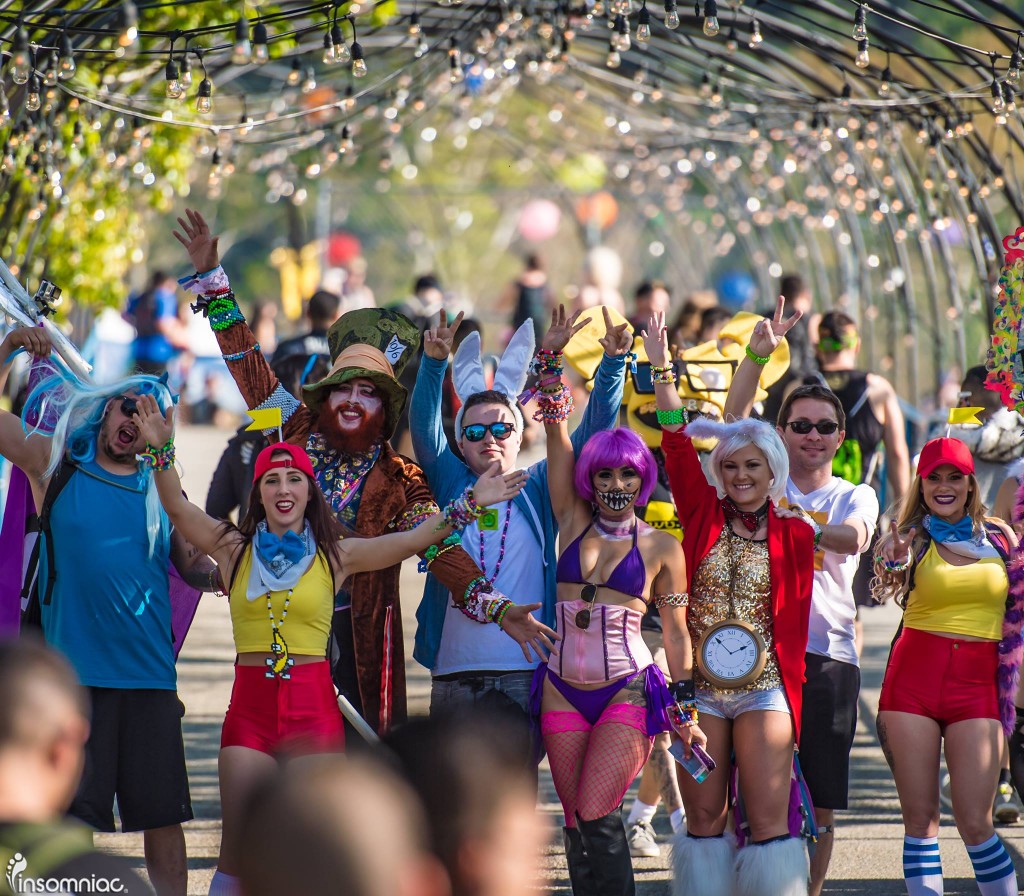 With happy bellies come happy people, as if anything could improve the vibes that came from the crowd at an Insomniac event. The attendee’s title as “Headliner” is one that is said so often that people tend to put the term aside, but when it really comes down to it, the people you encounter at this specific promoter’s festivals are some of the most generous and fun loving people you can find. It is something special to see those with merchandise for a Trance artist rocking along to a Drum n’ Bass set among many other crossovers, and it speaks to the open minds of those who make the trek out to San Bernadino. With creative totems and outfits, the spirit of the show is felt when these thousands of attendees move and shout in unison. 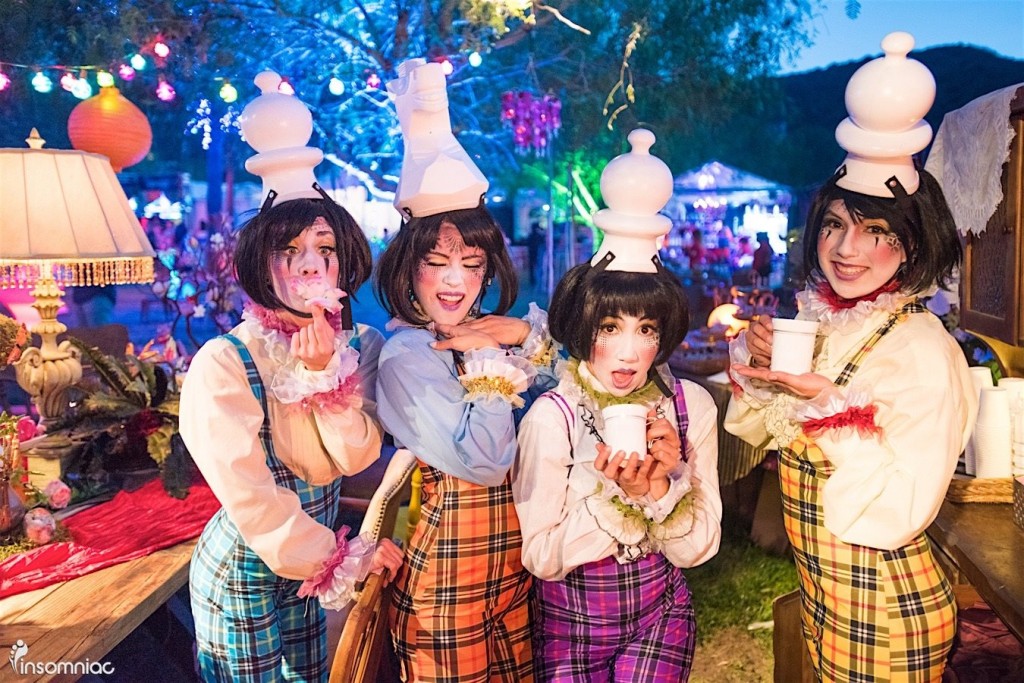 Those who fill the dance floors are only one kind of people that roam about. Something must be said about the performers who grace the grounds with their insanely creative movement and costuming. This year’s performance team included but was not limited to Sparlepusses, Pink Flamingoes, and Pirates on the coolest ships you’ll ever see at a show. It was a privalege to follow a group of ladies in normal conversation transition into character on their walk from backstage into the action. “Are you ready?” was repeated multiple times and morphed from a casual question to an enlivened chant that led them onto the main grounds, where they enchanted those who made eye contact. Greater still was their synced movement they and plenty others brought to the beats provided by the DJs who played. 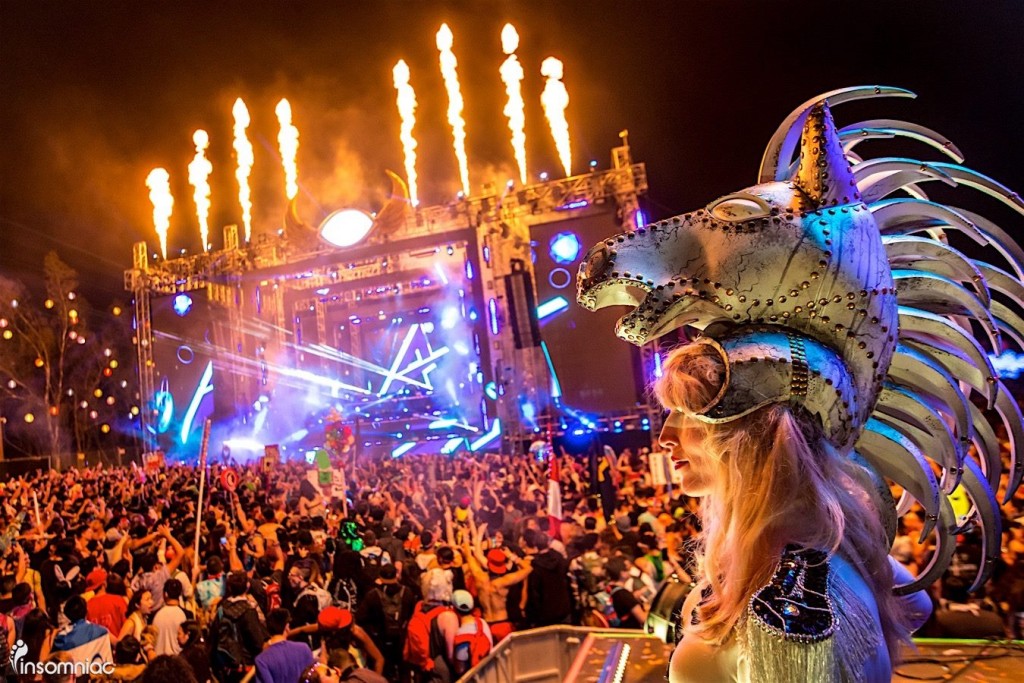 ​There were four powerful centers of music that filled the space this year. Upon stepping onto the grounds, one’s first contact was with the Outer Realm, home of two incredible and polar opposite tribes within Insomniac’s ranks. The first night was a premiere of Dreamstate to a festival environment, bringing with it the likes of Myon and Shane54, PureNRG(Giuseppe Ottaviani and Solarstone), and the U.S. Premiere of Ferry Corsten’s Gouryella alias. Plenty of new faces gained exposure to the sounds of Dreamstate, but amazing still was seeing the dedicated faces of people from LA and San Francisco’s events, signified in the numerous official black shirts that held that DS logo.

The energy 180’d on Saturday due to Bassrush rolling in with Spag Heddy, Ghastly, and Calyx & Teebee, among many others in the Bass Music spectrum. This family is more than well established, so it wasn’t a surprise to see the crowd packed all the way up Lookout Mountain for the last act of the night, Datsik. We’d say considering the formation of both devout crowds in attendance and the simple yet intense execution of the stage, the Outer Realm was a place we hope stopped you in your tracks from the tunnel for more than one or two sets. 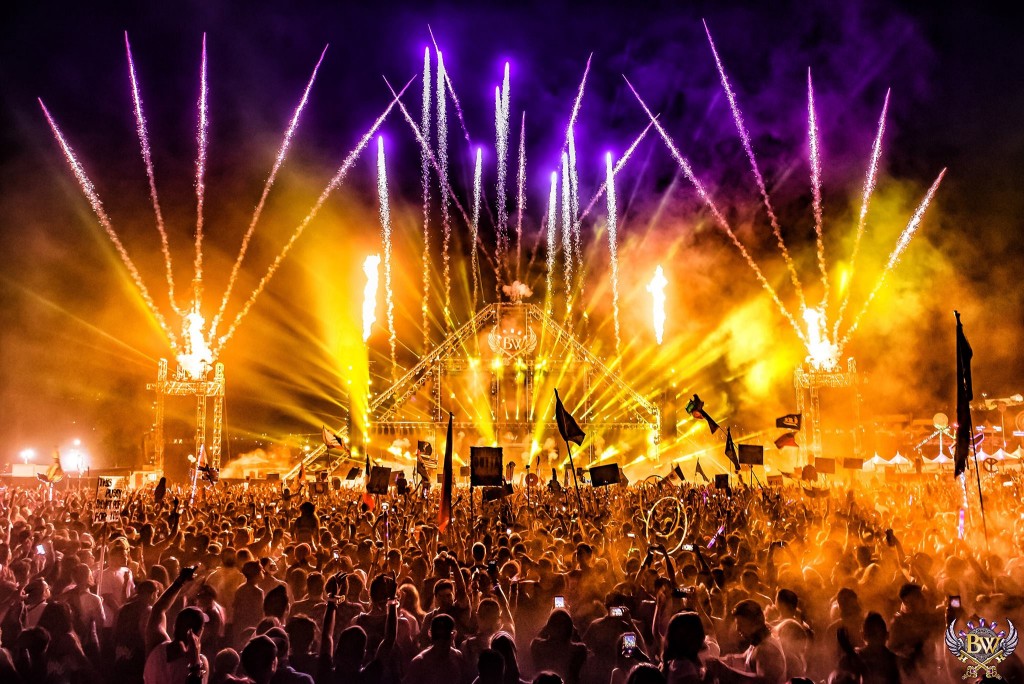 ​As their mission has always been with this patch of land, Queens Domain, the stage with the blockbuster acts of the weekend such as Sleepy Tom, Slander, Deorro, and Dada Life was at the end of the path. This made it so that those who were drawn to the acts there were also able to experience some of the best talent that lived on the other stages as well. Said stage featured a grand spectacle of pyrotechnics and water effects along with a great curated visual show. The end of your journey was definitely worth it, as Queens Domain offered up a diverse experience that built the energy gradually from start to finish as if it were a traditional nightclub. 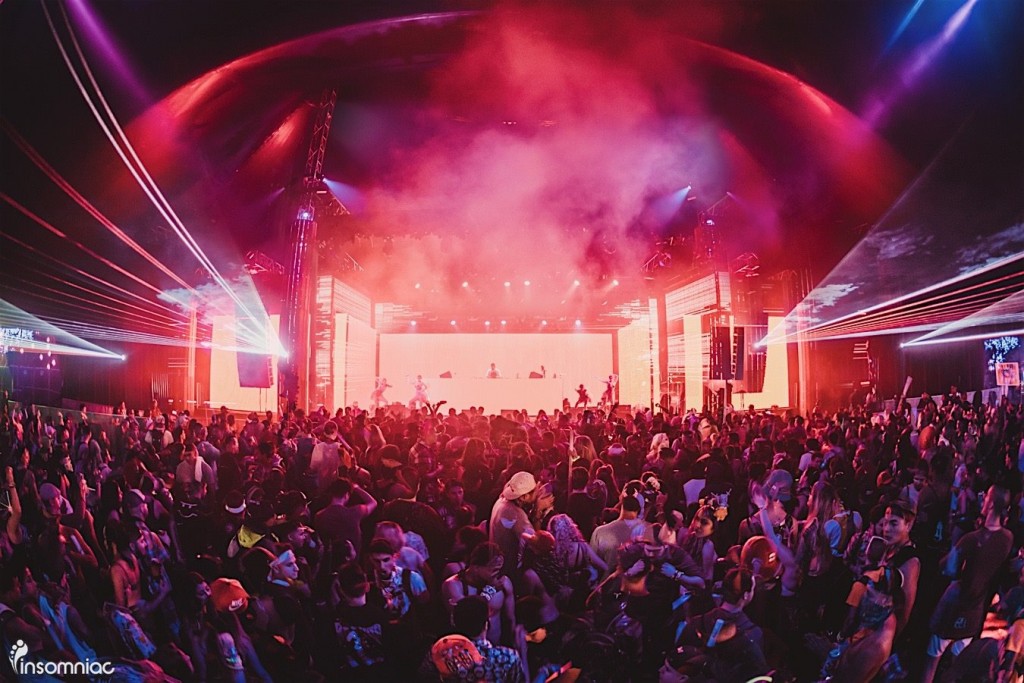 ​The purple and pink tent smack in the middle of the aforementioned productions was a treat to the eyes as well. The Cheshire Woods tent took the eye candy of a big production and spread it out around the stage. Tree like structures with lights inside it glowed in the crowd, and the stage itself sported an LED wall that folded inward, causing some cool silhouette effects on the acts playing. Will Clarke, KiNK, and Pan Pot were some of the many acts who brought the minimal and funky sounds that fit the area’s design like a glove. Right accros from there was a second source of smooth beats; the Boombox hosted underground label Cats n’ Boots, with The Real Deal Montiel and Moni swaying their audience from left to right. Each of these four experiences not only supported some of the best electronic musc you could find, but provided the right setting to understand the genre to someone walking in for the first time. 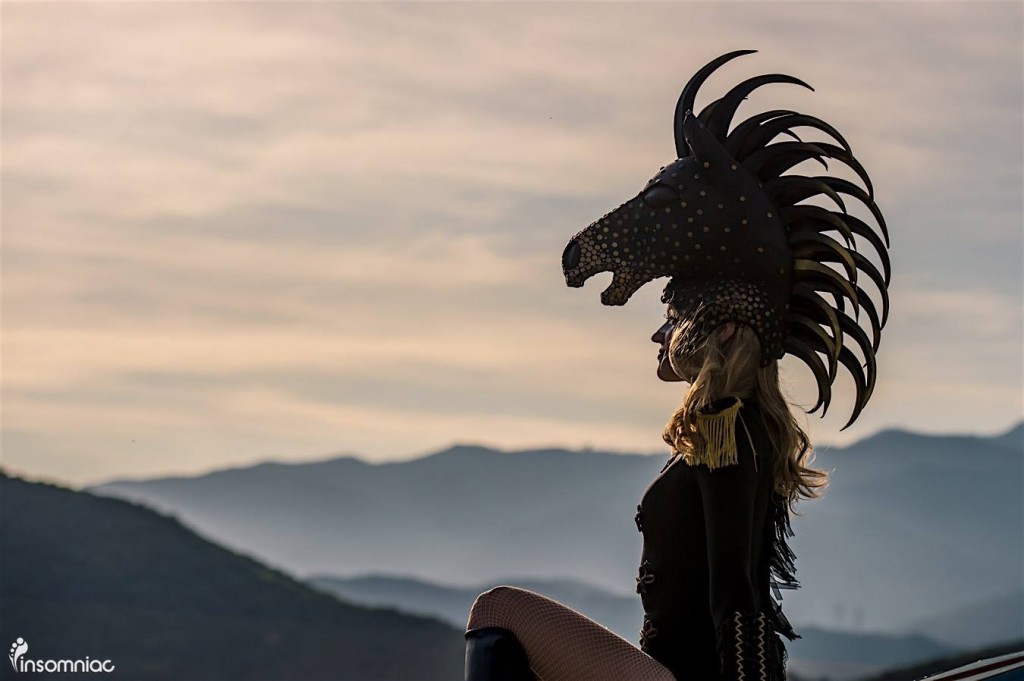 ​2 full days of dancing, eating, and witnessing all that Beyond 2016 had to offer was a strong verification that the experience took a heaping helping of tender love and care to realize. Insomniac provided an intense emphasis on appointing the vibes of a bizarre dimension without divvying from the music at the center of it, which is a feat many other promoters may not even attempt to do. It’s been about a week since we’ve set our bags down to unpack from the weekend, and looking at the ticket, flyers gathered, and Merch still gives us a smile in remembering all of the memories made. EDC, Nocturnal, and Escape are all to come to quench the thirst for more festivals, but we know that returning to this particular show will be on the very back of our minds until next Spring.

Learn more about Insomniac’s upcoming events on their main website. Look out for a special piece on the camping experience this week.