The halfway mark for Zeds Dead’s Deadbeats Revival Tour this last Saturday was home to some of the best vibes of the year. Because they decided to opt out of any Park n’ Rave style events in 2020, the mounting anticipation to see them in a setting as epic as the Shrine Amphitheater was palpable. The Bass Music Duo brought more than a decade of touring experience into their headline set. 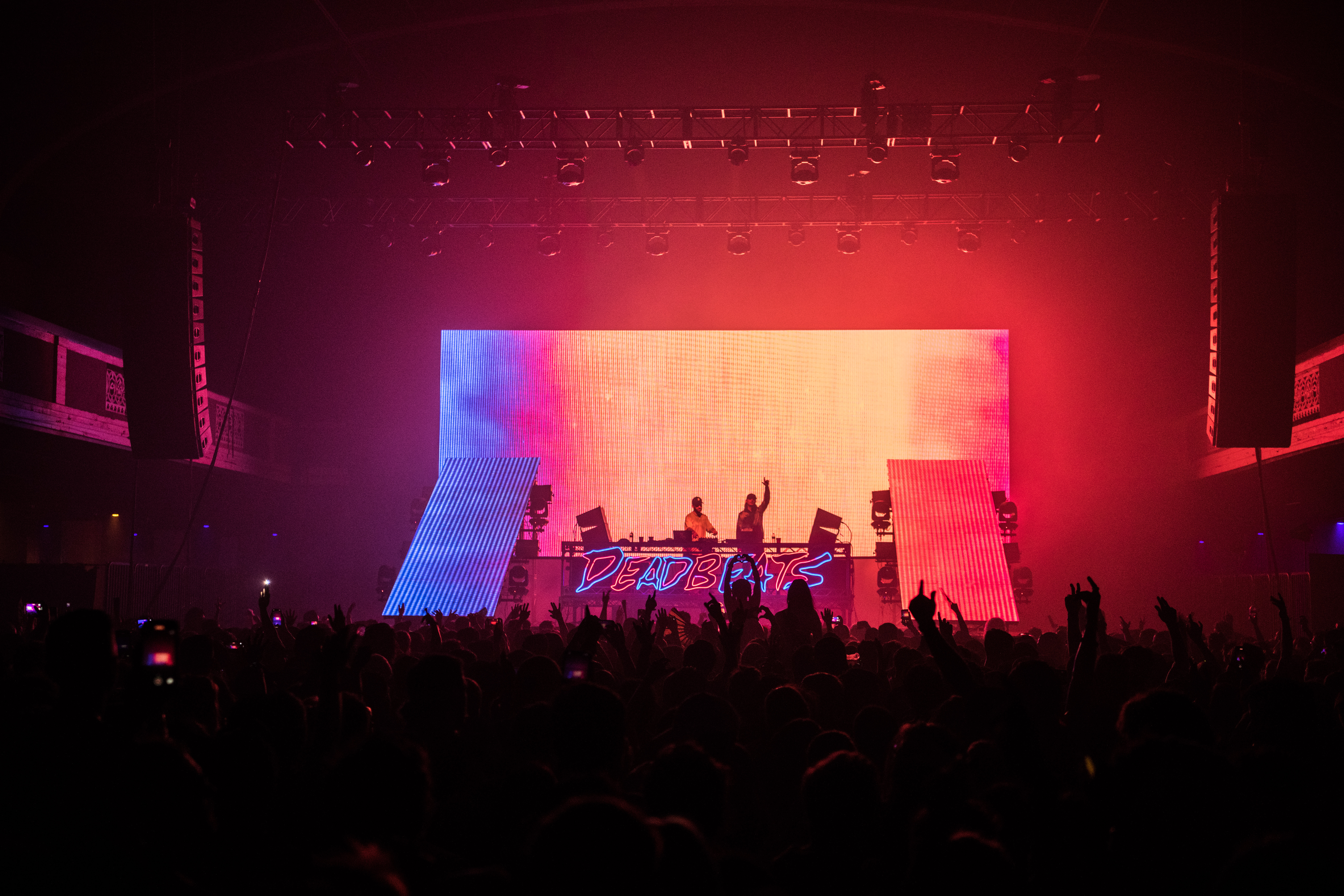 The Revival tour had already brought a fierce amount of audio firepower to previous stops in Texas and Hawaii. They were joined by a range of great talent both on and off their label. For this halfway point stop, they brought a bigger pool than normal to the DTLA party. Kumarion opened things up, followed by DNMO, Must Die!, DOROELOE, and a special virtual performance by LV4 before they hit the stage themselves. Of the many kinds of Dance Music to return to the venues of the world, it’s especially great to hear a musically rich variety of Bass Music via the sets that all these acts had to offer. 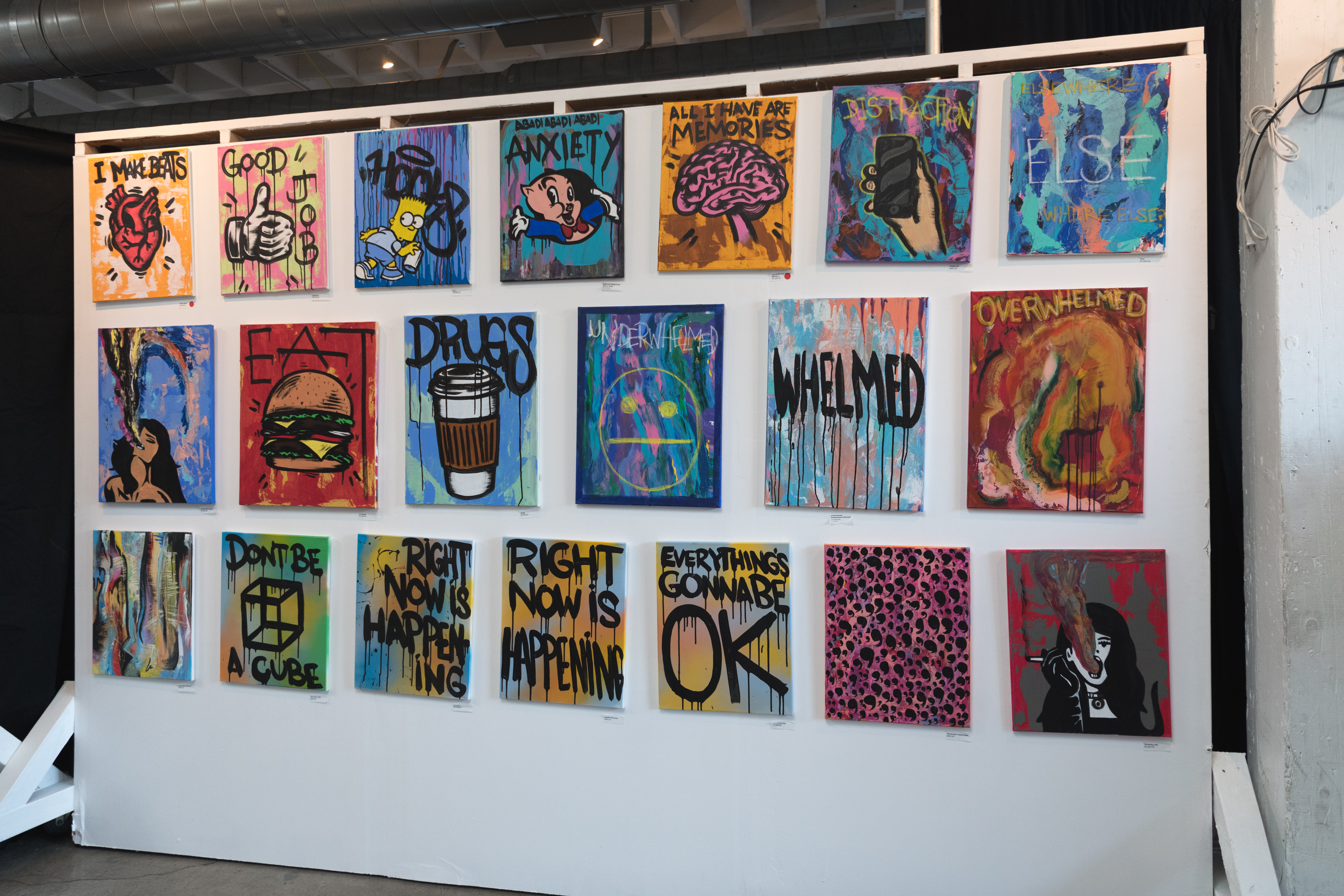 LA was a distinct part of the five month run because of a special event during the day: Hooks’ art gallery, “Paintdemic.” Hosted in the Arts District, the showing was a nice kickback went for a few hours. Several paintings adorned the gallery, many with familiar characters like Porky Pig and Bender. There were also more abstract characters, shapes objects and messages. A walk through the place showed off a side of the producer that even the most devout fan may not have at the front of their mind. 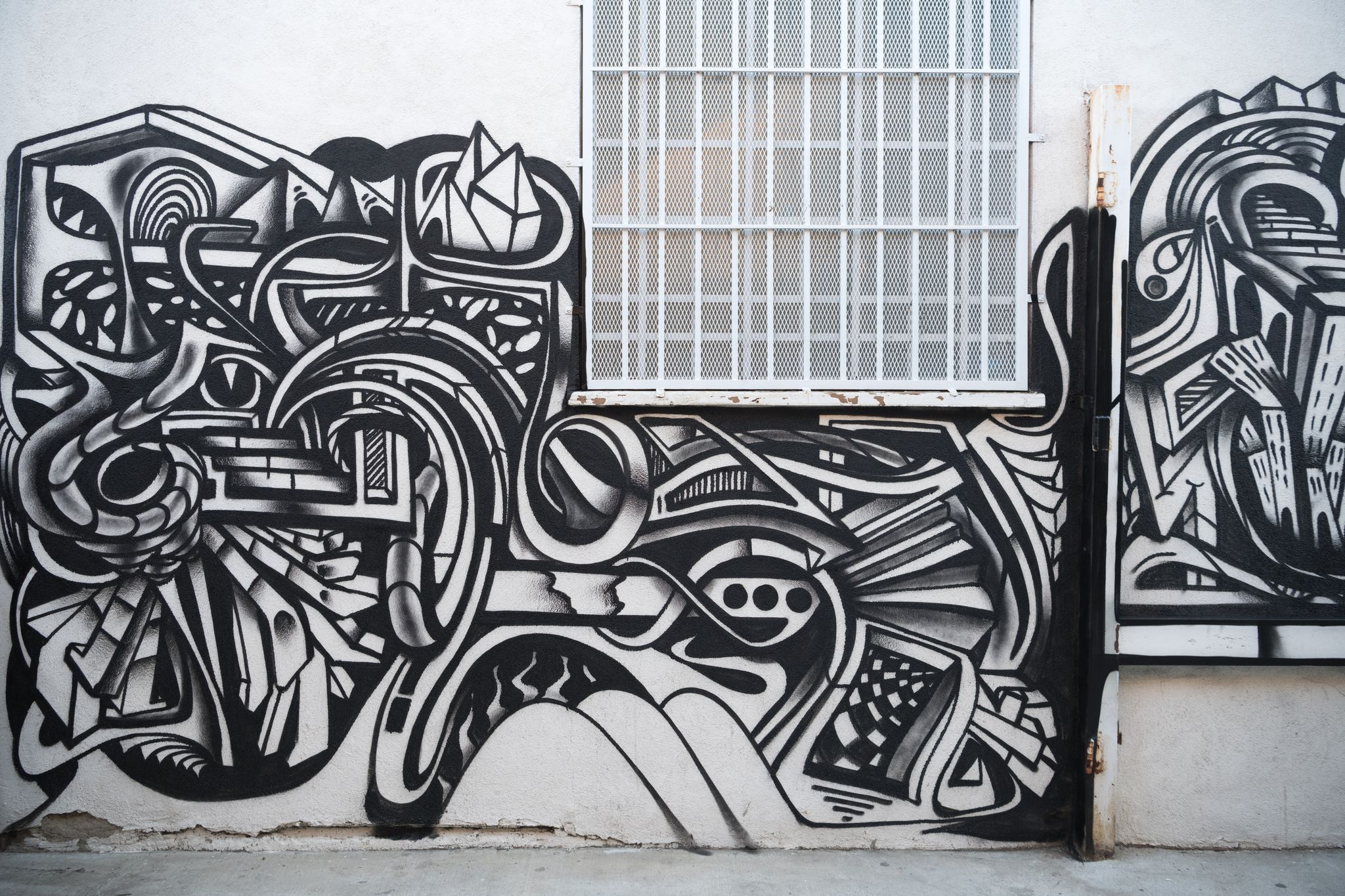 Hooks gave the gallery its title to reflect his experiences creating in a time that was much less loud and travel-heavy than normal. “I would joke that it was a mid life crisis (like that time Hal had one in Malcom in the middle of a nyone remembers that)…Joking aside, having the goal of creating a gallery show and every day working towards that helped give me some structure during those uncertain times,” he said via Instagram. “Also just zoning out and painting I found to be very stress relieving most of the time (unless I created a complete piece of crap, which did happen often).” 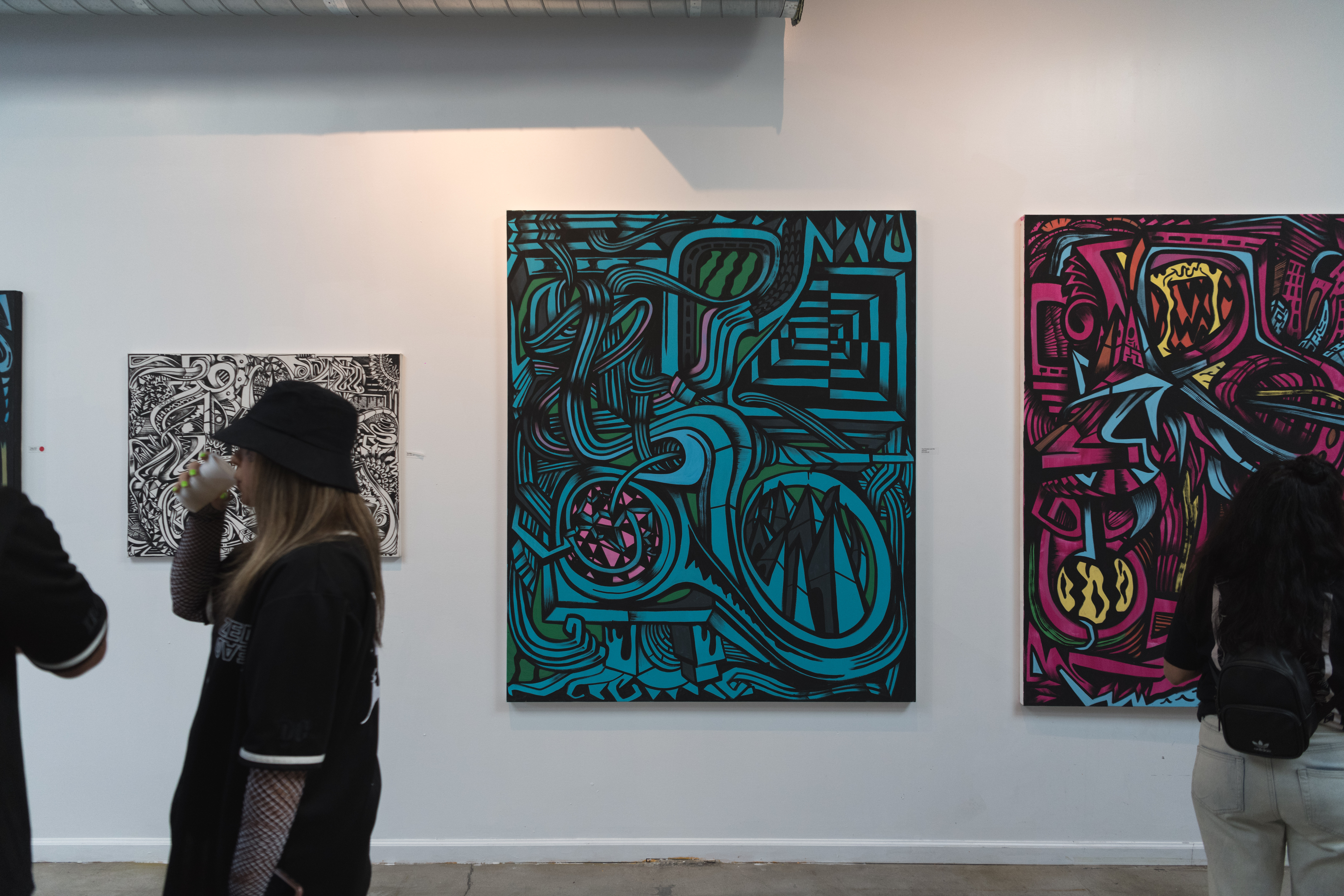 Fans not only got to experience some new art, but they also caught a glimpse at how precise of an eye that Hooks and DC have when it comes to directing their visual content. Every poster and piece of cover art associated with Deadbeats has an edgy, unique aesthetic to it. The creative direction present in all of the paintings around the gallery was reflected in the videos that ran on the crew’s slanted LED screens throughout the night. From specially colored time lapses to glitchy air-trips through city skylines, the two know how to visually articulate the their sound. 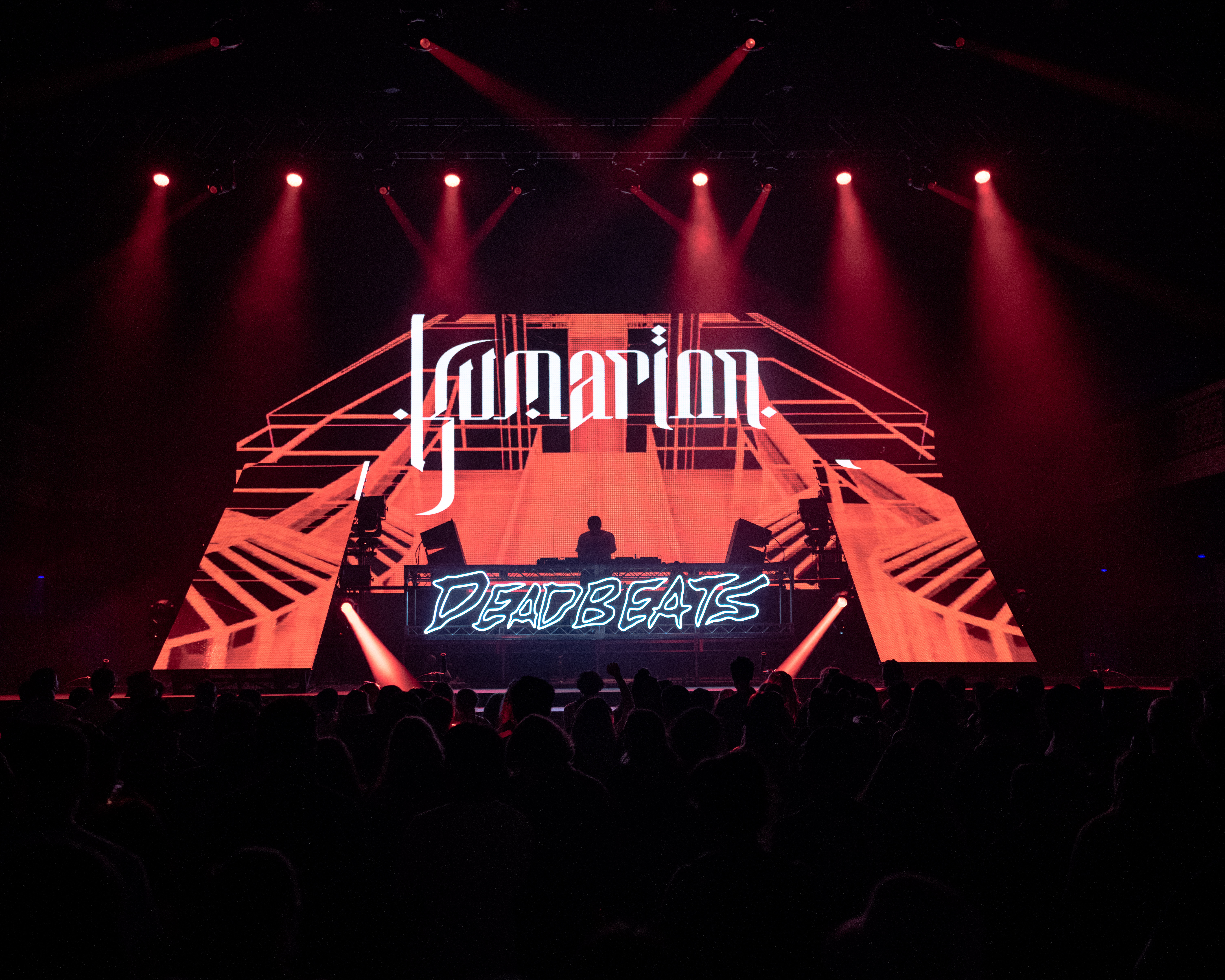 It’s hard to beat a striking start to your tour at a festival like Electric Zoo, but Downtown LA’s gargantuan dance floor at the Shrine Auditorium competed quite well. The more bodies on the floor, the more energy there is; from a birds eye view, one could see a huge cluster of fans from Kumarion’s opening set at 9. The crowd was easily kept in good spirits with all of the bars available up and downstairs. There was even a place with some cheap bites(with a cleverly priced $6.90 cup of Mozzarella Sticks). 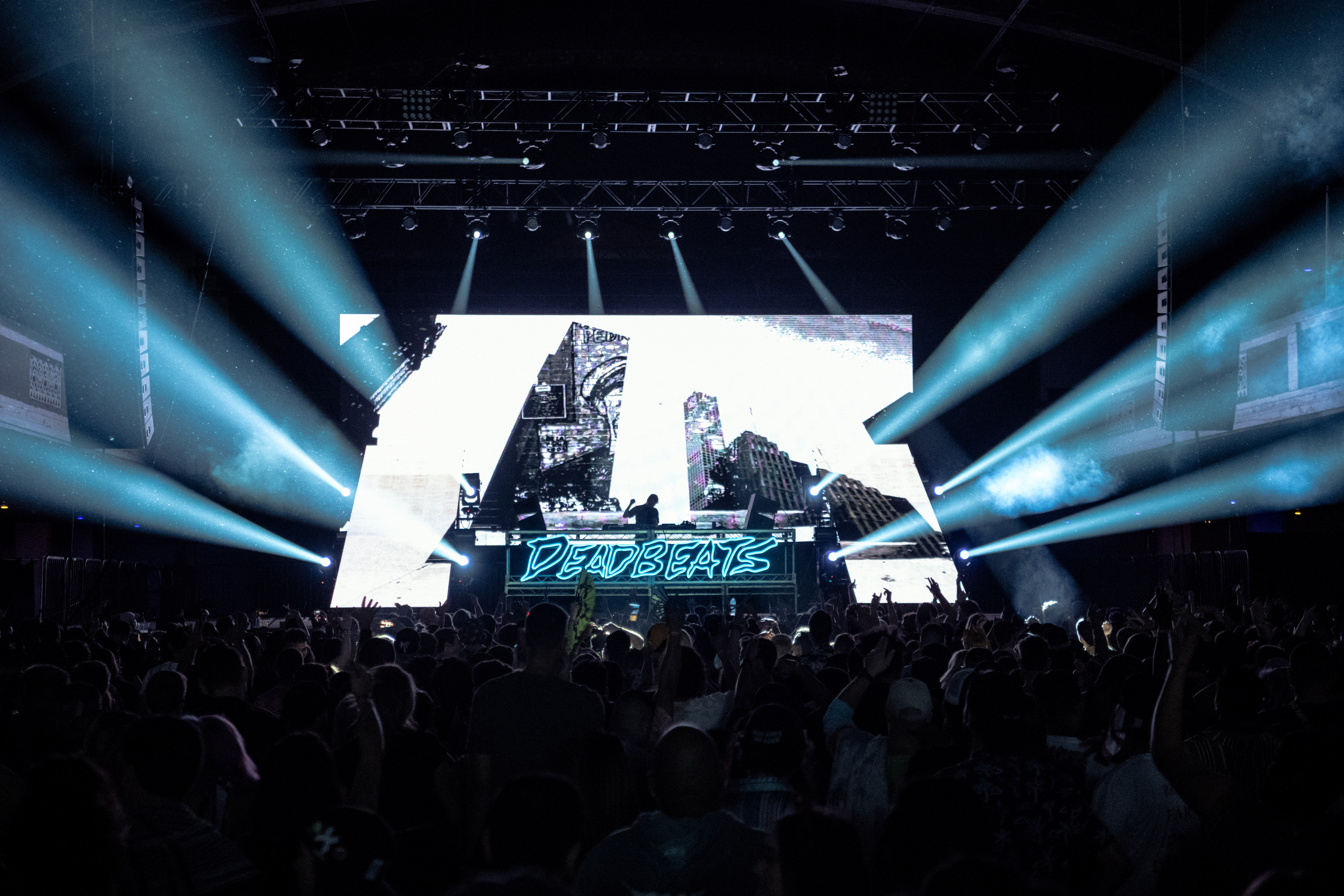 A telltale way to see that a show is going to be full of passionate fans is to observe the environment around the venue. More than three quarters of the cars we passed by in the lot had some kind of Bass Music artist sticker on it, and a majority of the attendees were decked out in gear representing the artists on the lineup. We even overheard a few people say they rallied to the night after partying at a few other parties earlier that day. As the show rolled on, the crowd’s cheerful response to every act’s callout to make some noise could be heard easily over the giant speaker towers. 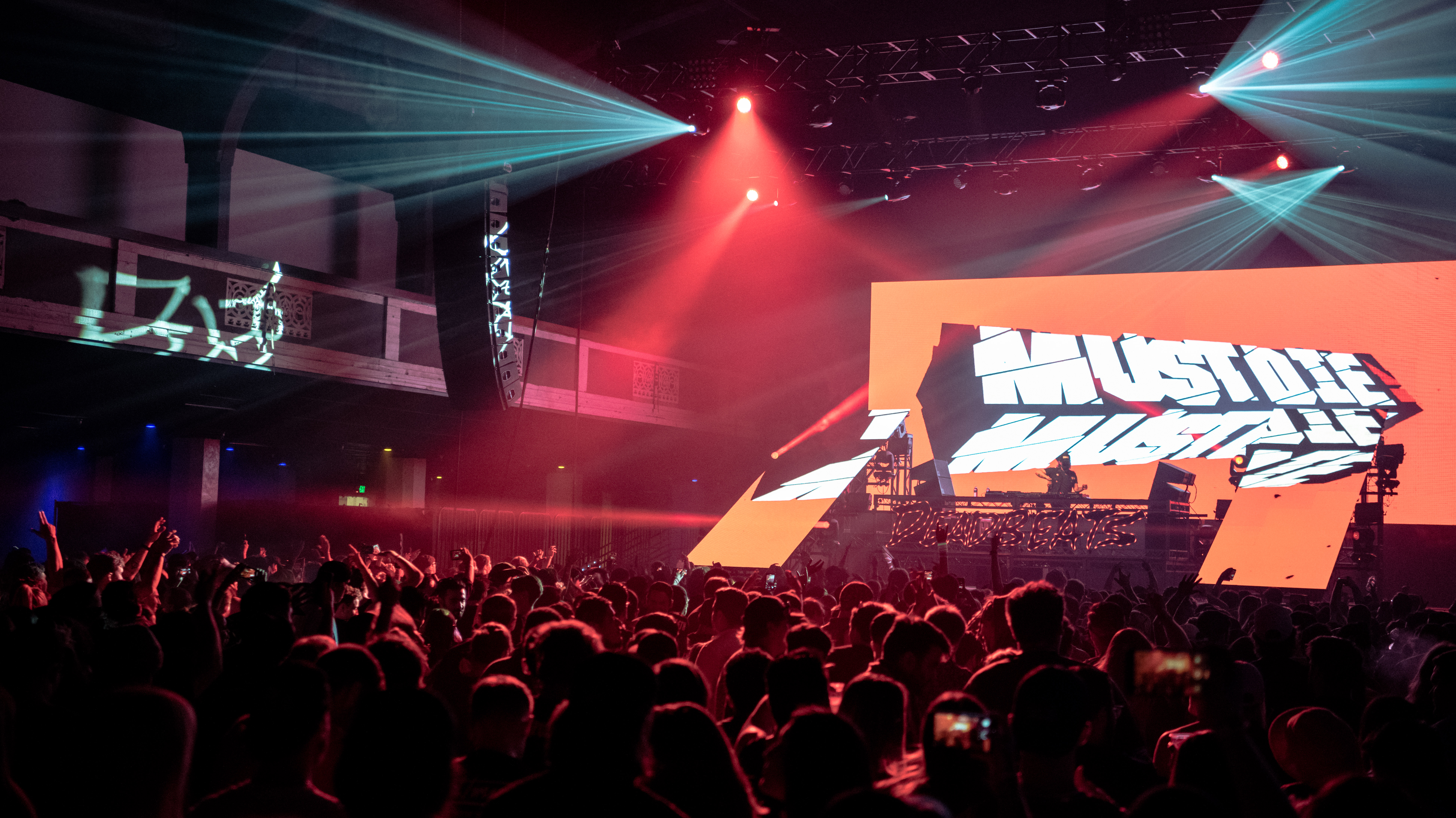 Nearly all the acts had a little less than an hour to drop their sets, but each did so with flair. The seasoned DJs fit different lyrics, drops and mashups together like puzzle pieces to play several songs in the short slots they were given. From artist to artist, everything was fluid. Kumarion and DNMO dropped a load of Drum n Bass, followed by a no-holds-barred Dubstep set from Must Die. The energy flipped into chill territory from DROELOE, building things up nicely for an eclectic 90 minutes from the title act. 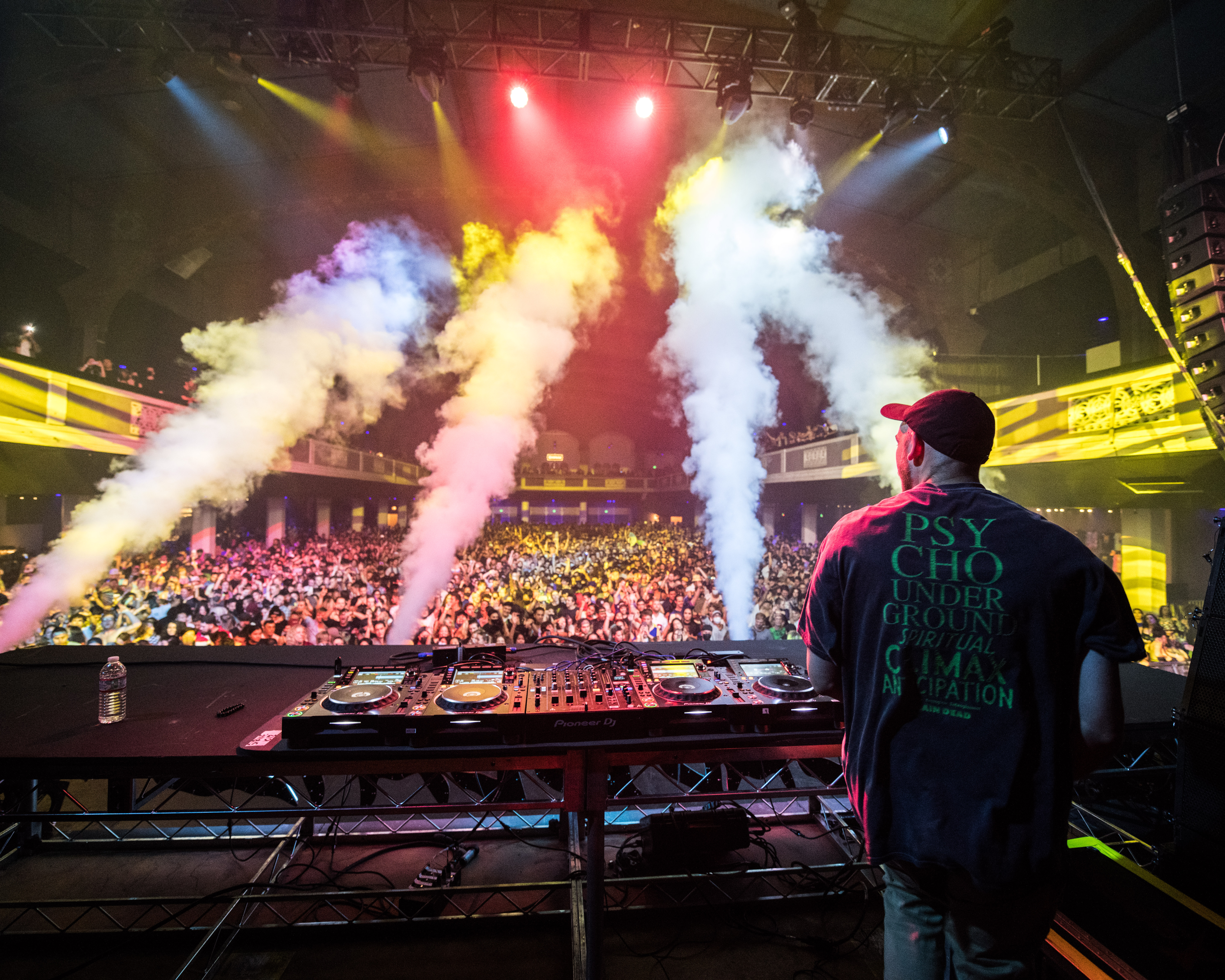 Throughout the night, the talent kept up a smart balance of newer and older tracks. Knowing many folks hadn’t heard a classic out of a proper sound system in ages, they made sure to drop some in. DNMO dropping in Tep Ho from TC was an especially welcome selection. And though it’s not quite as old, hearing the duo’s collab with Oliver Heldens “You Know” for what felt like a decade was also a big moment. 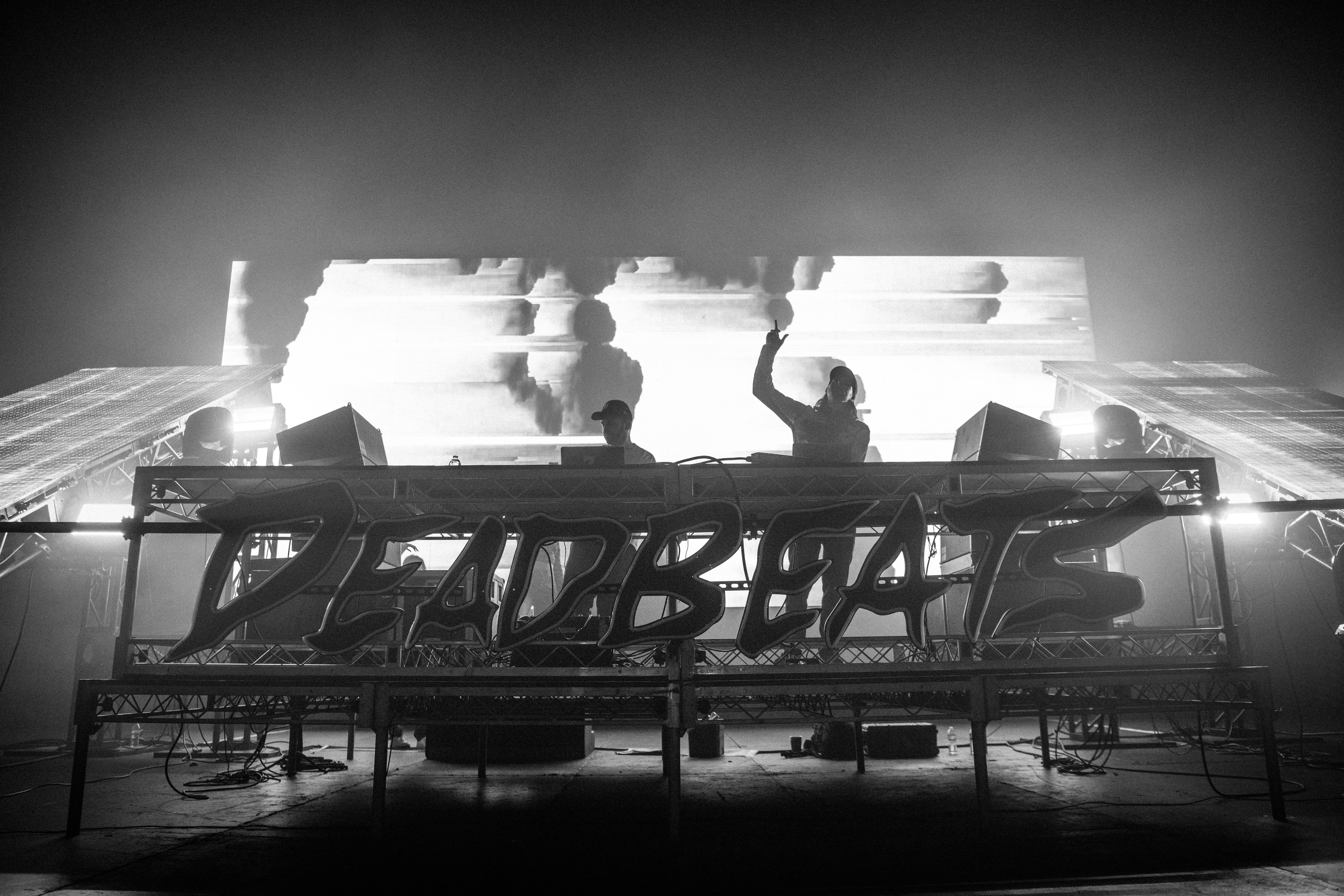 As the night came to a close, their final track of the night “Blame” with Eliphant soundtracked a raucous  last hurrah. The thunderous applause for the group at the end of the 5 hour marathon was well deserved. Anyone new to the group had their evidence as to why the Deadbeats crew sold out two dates in Zeds Dead’s hometown. 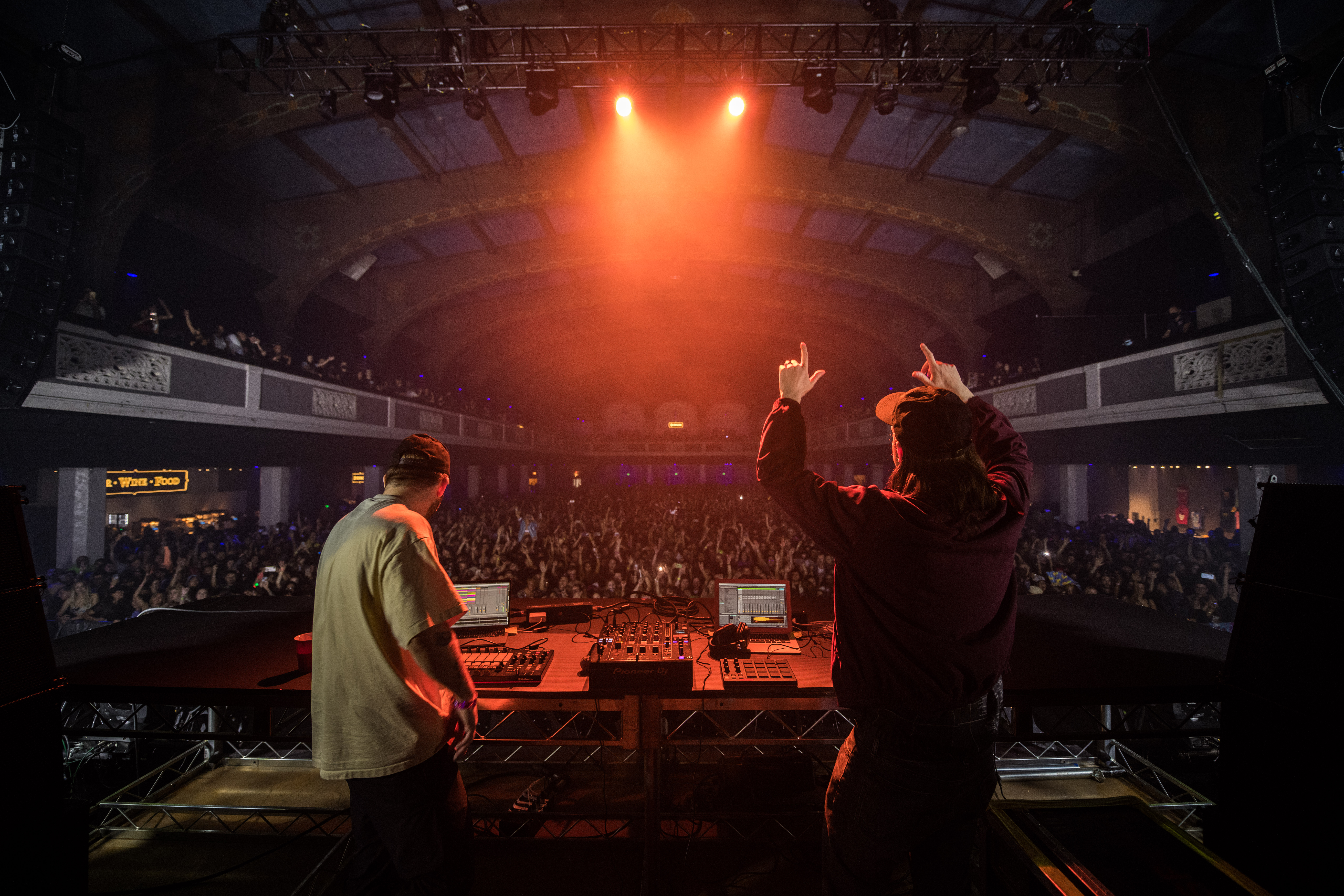 The best part about this tour is that it’s only halfway done. As the Deadbeats crew travels around the rest of the country, they’re bound to help bring the spirits of several thousand people back up to pre-2020 days. Tomorrow in Seattle they’re taking DROELOE and welcoming Party Favor, Sippy and Jaenga for what we think is gonna be another amazing night. 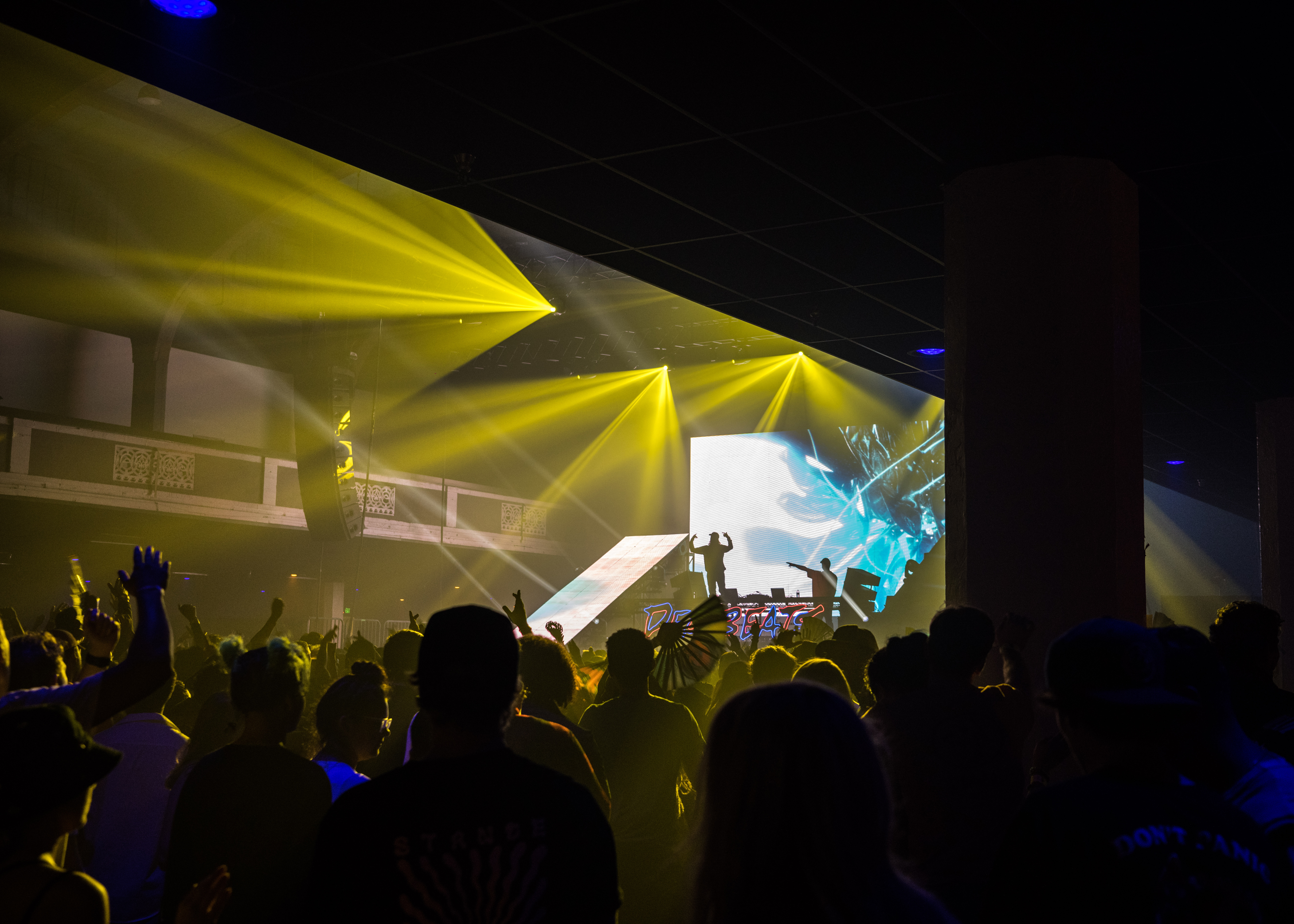 Check out more tour dates for the Revival Tour and snag one yourself on the official Deadbeats website.