Insomniac has officially revealed the most anticipated lineup of the 2019 festival season, featuring more than 240 of the world’s most talented dance music artists to perform at the monumental 23rd edition of Electric Daisy Carnival (EDC) in Las Vegas. Debut performances, exclusive b2b collaborations, unforgettable sets and more will be heard at the annual three-day event, returning to Las Vegas Motor Speedway, Friday, May 17 through Sunday, May 19. The full list of eclectic acts can be found, here.

Kicking off the final countdown to North America’s largest dance music festival, the 2019 EDC Las Vegas lineup will deliver on its kineticENERGY theme with momentous performances across eight iconic stages from the likes of Alesso, Alison Wonderland, Armin Van Buuren, Dillon Francis, Diplo, Illenium, Kaskade, Martin Garrix, and Tiësto. Jamie Jones, Green Velvet & Claude VonStroke’s Get Real, and Gorgon City b2b CamelPhat will bring the house and underground sounds to kineticFIELD for the first time ever, while David Guetta returns to EDC Las Vegas for his first performance at the festival since 2012. Golden Globe, SAG, and Critics Choice award-winning actor Idris Elba will be playing back-to-back with Solardo at the neonGARDEN, while Ferry Corsten will return as “System F” after an epic 2018 debut. Making his first domestic EDC appearance since 2010, Deadmau5 brings along his new cube 3.0 stage, while artists including Amelie Lens and Zhu—also under his dark Blacklizt alias—make their Electric Daisy Carnival debuts. For the first time since his retirement from dubstep back in 2013, Skream! will be returning to the bassPOD for an old-skool back-to-back set with Rusko. Famed rapper, producer, actor and model, A$AP Rocky, will showcase the best in hip-hop during a special performance at cosmicMEADOW.

Yesterday, during a special “Music Through Music” episode of Pasquale Rotella’s Night Owl Radio, the Insomniac Founder premiered the full artist lineup through a series of mini mixes featuring short clips of artists playing EDC Las Vegas 2019. Throughout the episode, fans were able to listen and discover the full lineup and interact with Rotella on social media.

In addition to the previously announced Oasis Pool takeovers at Camp EDC, featuring Bassrush Records on May 17, HARD Recs on May 18, and Insomniac Records on May 19, the full roster of artists providing the soundtrack to EDC Las Vegas 2019 includes: 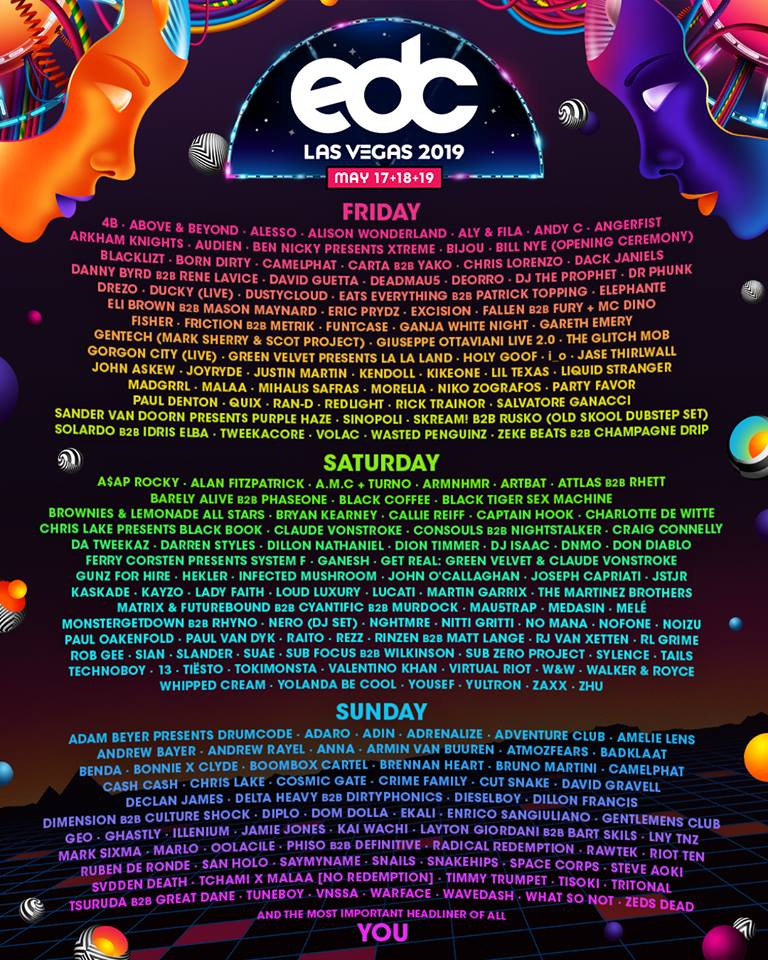