Insomniac has announced the return of its underground techno, deep house and tech house brand, Factory 93, with a special showcase celebrating the 10-year anniversary of iconic electronic label, Diynamic. On December 3 at a warehouse in Downtown Los Angeles, Factory 93 will present one of only five North American dates in Diynamic’s “10 Years Diynamic” tour, and the only stop in Los Angeles. A presale for previous Factory 93 ticket holders will be available via sign-up list on Wednesday, October 12 at 12 PM PT, with the general on sale to follow on Friday, October 14 at 12 PM PT at TheFactory93.com.

10 Years Diynamic Los Angeles presented by Factory 93 will feature an impressive lineup of some of Diynamic’s biggest artists including label founder Solomun, as well as Adriatique, Kollektiv Turmstrasse (Live), Stimming (Live), Karmon and Magdalena. Similar to the recent Factory 93 launch event, the night will feature a true warehouse aesthetic, immersing fans in nothing but darkness, a globally acclaimed soundtrack, live performance art and many more surprises.

The show follows the announcement of Factory 93’s festival stage debut at Escape: Psycho Circus, in an ongoing series of hosted events, all dedicated to nurturing techno, deep house, tech house and the unique vibe of warehouse culture in Los Angeles. Insomniac will continue to offer fans the opportunity to travel back in time to its storied roots and experience all that the 90’s underground music scene had to offer. 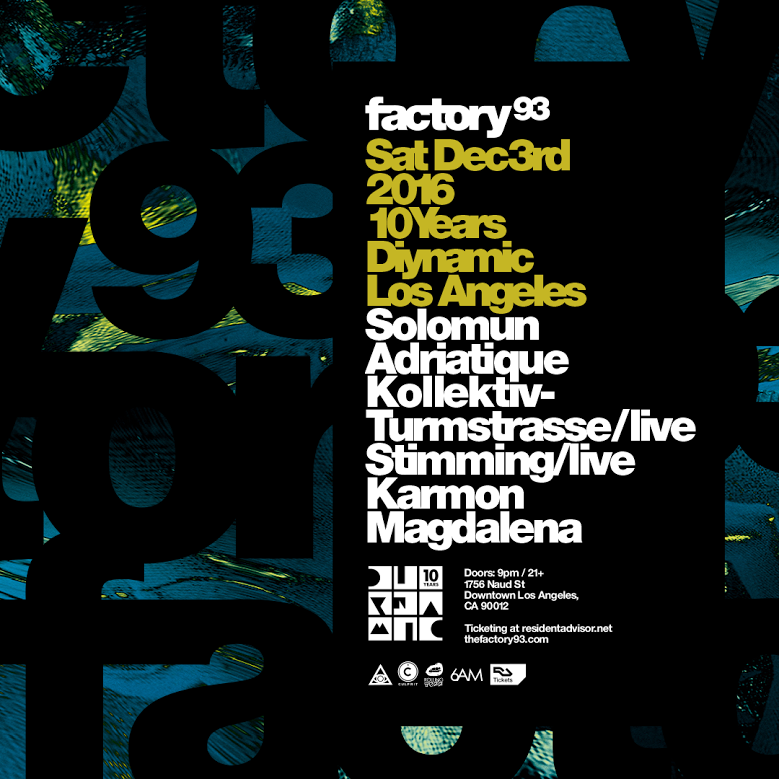