Hardstyle fam, once more our hearts are hurting. Headhunterz announced today on Facebook that he will be stepping down from the Virtual EDC lineup for this weekend. According to his team, there was some miscommunication regarding the exclusivity of the “previously announced” live stream and because of it, Headhunterz will be stepping down. The intention of this live stream, for William, was to be able to perform the first “Home of Hardstyle” set and this set that was supposed to be performed contained a great amount of exclusive music. There has been back and forth on the matter and with these new circumstances, an agreement could not be reached in time. Headhunterz will still be part of other live streams so don’t be too sad! Hardstyle fans I know you are sad but who knows, let’s see who else makes it on the lineup to replace him. Who do you think will take over?

Due to a miscommunication regarding the exclusivity of the set of the previously announced EDC Livestream, Headhunterz is unable to be part of the live event. The intention was to broadcast the first “Home of Hardstyle” set to EDC’s audience, which Willem spent many days working on, and which contains a lot of exclusive new music. It later became clear that this was not possible, and we were unable to come up with a solution that would satisfy everyone in time.

Rest assured, more livestreams are on the way from Headhunterz, with more new music. Stay tuned! 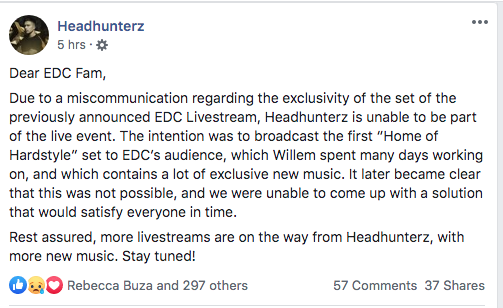 Promoters of The Chainsmokers Concert in the Hamptons Fined $20,000