Insomniac announced its partnership with Venue Interactive to bring fans a state-of-the-art Virtual Reality (VR) activation for the 6th annual Escape: Psycho Circus, on October 28 and 29 at the NOS Events Center. Festivalgoers will have the unique ability to “teleport” between live performances on two stages, as well as relive past Insomniac festivals in an immersive interactive VR experience. Fans will be treated to a heightened level of interactivity, as they control the elements of their own VR adventure.

Headliners will have the opportunity to experience the VR activation with locations in both General Admission and VIP. Each of these stations will consist of HTC’s Vive VR system, high-end gaming PCs powered by NVIDIA, and V-Moda Headphones, transporting fans into another dimension. Each of the two featured stages, Slaughterhouse and Ghouls’ Graveyard, will be equipped with Venue Interactive’s 360-degree cameras to capture live performances, situating VR users right next to their favorite artists as they perform in real-time. For those looking to take a break but never miss out, this VR activation will allow users to be everywhere at once beyond the realm of imagination. 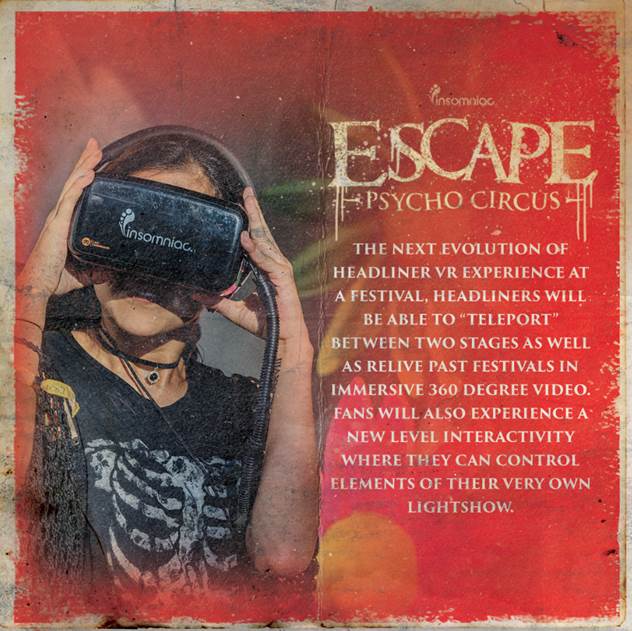 Escape: Psycho Circus will feature a haunting spectacle of hair-raising sets, nightmarish décor, circus amusements, creepy costumed characters, and an array of devilish delights. In celebration of Halloween weekend, over 60 dance music acts will perform across four elaborately designed stages including heavy hitters like Kaskade, The Chainsmokers, Eric Prydz, Armin van Buuren, Hardwell, and more. This year’s event will also feature the unveiling of the largest interactive haunted house to ever appear at the festival. A massive maze-like experience will take attendees on a journey through six years of Escape’s frightening dimensions and sinister storylines.