Today, world-renowned festival experience creators and structural art scene leaders, Do LaB, have announced the 2018 musical lineup for their famed bohemian oasis at Coachella Valley Music and Arts Festival on April 13-15 & 20-22nd, 2018. Do LaB has become an important component within Coachella, bringing its colorfully transcendental environments to the festival over the past 14 years.

Continuing its goal of bringing the more avant-garde shades of electronic music to Coachella, Do LaB has compiled a who’s who collection of greats and rising stars alike from across the global scene to their double weekender. Over the past decade, the Do LaB has seen performances ranging Bassnectar and ODESZA to TOKiMONSTA and Gorgon City.

This year, Do LaB will welcome world-class house and techno sensations like Behrouz, Thugfucker, Moscoman, Chris Lake, Lauren Lane, John Monkman, and Sage Armstrong along with epic back to back sets from Dirtybird staples like Ardalan b2b Sacha Robotti and Christian Martin b2b Worthy, plus a standout performance from the label’s newly launched goldenboy, FISHER. Do LaB will also undoubtedly shine light on the more experimental sides of electronic music with genre-busting talent like EPROM, OSHI, Luca Lush, Yahtzel, and Brasstracks, plus performances by multi-instrumentalist live acts Brasstracks, Anabel Englund, Monolink, and many more.

Fans should also prepare for the unexpected as Do LaB has a history of not only breaking emerging talent, but also surprising fans with unannounced sets from the industry’s leading talent. Past surprises have included the likes of Skrillex, Richie Hawtin, Major Lazer, Bob Moses, Bonobo, RÜFÜS DU SOL, The Glitch Mob and more. This year, Coachella attendees can expect a groundbreaking collection of unannounced artists to surprise even the biggest music fanatics.

This year Do LaB will bring their distinguished Beacon stage back to Coachella. The Beacon is an architectural marvel, characterized by its vibrant wordly shape infused with it’s extraterrestrial features. Whether sitting under the shade of their pagodas, losing yourself to the hypnotic sway of the Squigs or the video installation The Cloud, or dancing yourself silly in the shady embrace of Big Fish – Do LaB’s ever-evolving presence and unparalleled creativity at Coachella has touched all on the famed polo fields.

Following the Do LaB stage at Coachella is their own multi-faceted festival, Lightning in a Bottle, which goes down Memorial Day Weekend each year. Lightning in a Bottle offers a totally unique festival experience, fusing forward-thinking musical environments, immersive art installations, and cause-driven educational and yoga programming within a sprawling lakeside venue in beautiful Bradley, California. Lightning in a Bottle’s 2018 musical programming boats some most talented artists in the music industry right now, with Anderson. Paak, ZHU, Griz, Fever Rey, Tokimonsta, Sofi Tukker, Tipper, Emancipator, Giraffage, The Black Madonna, MK, and much more on this year’s impressive lineup. 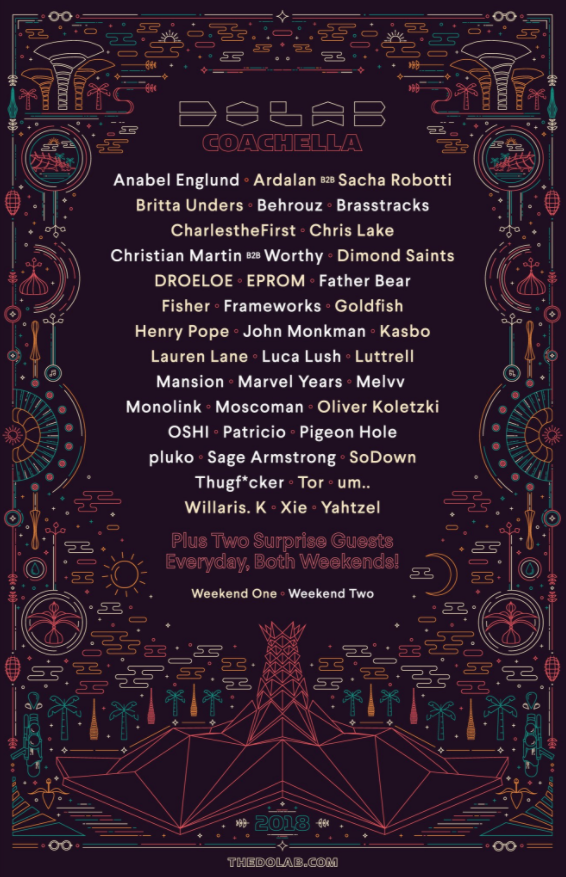