Insomniac announced its latest event in a series of underground warehouse parties hosted by Factory 93, the company’s dedicated techno, deep house and tech house brand. On Saturday, January 21, 2017, Insomniac presents Nicole Moudaber MoodRAW at Factory 93 inside a warehouse space in downtown Los Angeles for an epic four-hour set alongside special guests to be announced.

“My MoodRAW events are about having a ‘real’ musical experience between my fans and myself minus all the distractions,” said Nicole Moudaber. “It’s been nearly a year since I last played in LA and I can’t wait to be back, especially in a warehouse setting as one of the first events in this new space dedicated to the deeper darker sounds and warehouse culture. We’re bringing the gritty vibes back to LA for the second time with MoodRAW!”

Moudaber incorporates different elements of her personal life into MoodRAW, representative of her roots as both a promoter and a New York City club-goer during the revered days of DJ residencies. She lives and breathes the underground scene that embodies the Factory 93 experience. Moudaber has headlined her own sold-out MoodRAW tour, which took place in off-the-grid warehouse venues from Los Angeles to London. The tour garnered such acclaim that she later curated a MoodZONE stage at the 2016 Electric Daisy Carnival in New York.

MoodRAW is emblematic of the Factory 93 aesthetic, featuring an intimate venue, minimal lighting and the most advanced and immersive sound and technology in the underground space. Moudaber will undoubtedly bring a powerfully deep, dark, and percussive set to the downtown warehouse space in its simplest and rawest form. Tickets for Nicole Moudaber MoodRAW at Factory 93 Jan. 21st 2017 begins Friday, November 18 at 12 PM. 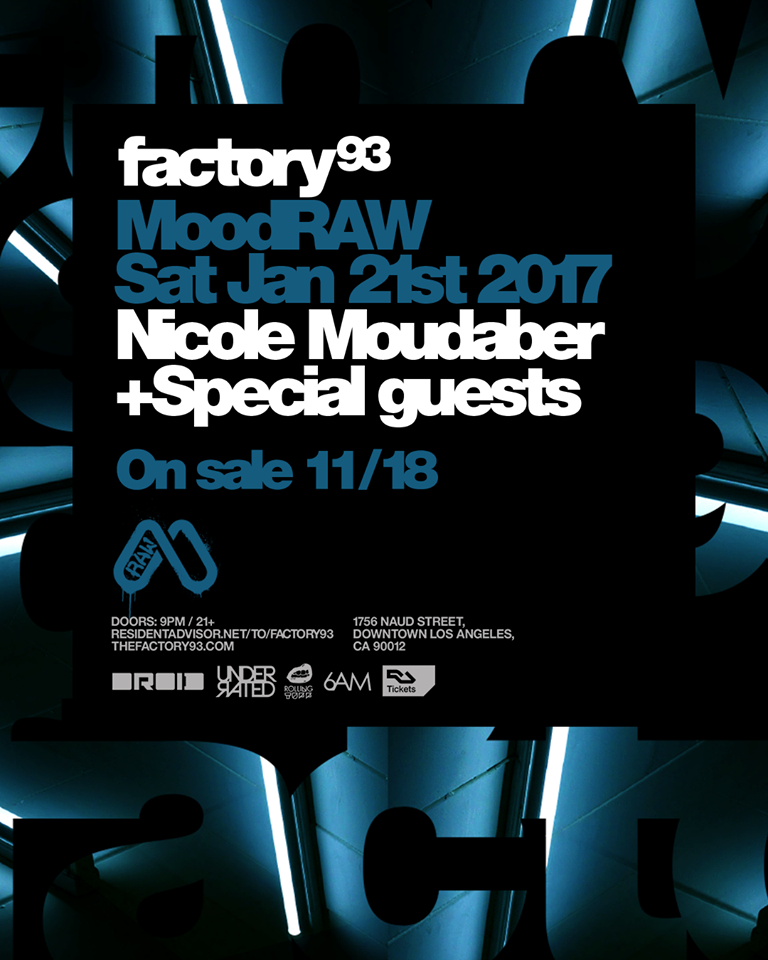