Last year, Skrillex performed alongside duo partner, Boys Noize, as their infamous techno supergroup, Dog Blood, at Detroit’s beloved techno festival, Movement. This year, he sets his lasers to stun with a label showcase that will takeover the UNDERGROUND stage at Movement’s 10 year anniversary festivities. Although not performing himself at the festival, Skrillex is sending some of the best label mates to represent OWSLA such as bass music heavyweight, Kill the Noise, the Aussie trap sensation, What So Not, and the blue headed house goddess, Mija. New comers to the label, Vindata, Josh Pan and Rezz are sure to be great treats during the earlier hours of the festival’s showtime, while Bixel Boys, Sliink, and Alex Metric guide you into the night. 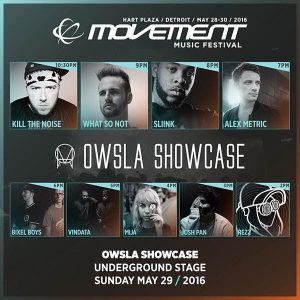 Get ready to get your feet moving and booty grooving to the OWSLA crew, who will be making the group tremble from the depths of the UNDERGROUND stage. Catch them all live on Sunday, May 29, 2016.