It’s quite easy to dismiss pretty much anything outside of your bubble these days; in the case of Trance producer Astrix, the world of Hardstyle is one with easily made tracks.in an interview, he cited the faster genre as being “easy to produce,” igniting outrage on social media.

“Still, in America, we’ve seen genres explode onto the mainstream, only to nosedive into oblivion just as quickly. For many, hardstyle in America fell victim to that fate.

“I don’t think it’s the same story here,” says Astrix. “Hardstyle is a very ‘easy’ genre to produce, and I think there were a lot of low-quality productions that flooded the market, and people just lost interest. Psytrance is more complex and deeper by nature. As for the future, we’re talking about art—who can really say what the future holds? But psytrance has more depth and offers a lot more for the listeners and dancers to discover. It’s a real culture.””

Atmozfears took the chance to call out Astrix on Twitter but no response. 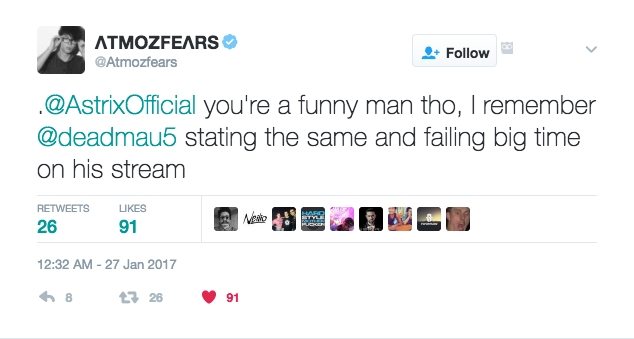 Almost reminds you of the deadmau5 drama, right? Granted, the artist did take to his own page to clarify his thoughts and apologize for any misunderstanding. You can read his full response below.

Seems that there are some people who for their own interests (getting likes on social media…) want to start a “war” between psytrance and hardstyle (as if genre names mean anything…) with me in the middle. So, I will clarify. I’m in war with no one. Especially not when it comes to art. When I was asked in an interview by Insomniac why has hardstyle flopped in the US and said that hardstyle was an “easy” genre to make and that the market got flooded with low quality productions, I meant that the genre got formulated when it became so popular and started seeing a flood of low quality cut and paste preset productions that got people fed up with it. That’s what I thought happened and it’s just one person’s opinion. I didn’t mean that there aren’t real artists making good hard style music, and that the leaders and innovators of the style don’t have good production. I’m on my way to Australia to play an amazing festival in the outback, so no Internet and I can’t indulge you in online duels, and anyway I don’t spend my life in online “wars”. So I will finalize this and say that if you know a little about me, you know that I can only respect anyone who makes their music from their heart. I meant no disrespect to anyone. Enjoy the music that touches your heart! – Astrix