The secret is out! Factory 93 presents SECRET PROJECT FESTIVAL in Downtown Los Angeles as they’ll be taking over the entire block of Naud street this Saturday, October 13th and Sunday, October 14th, 2018. The Secret Project Festival will feature a stacked Techno lineup that any real fan would love, even the Twitter snobs.

Secret Project Festival Tickets will start at $130 for a 2-day pass via Resident Advisor on Friday, August 24 @ 12pm pst. Payment plan option is available with $74 down due upon purchase. VIP tickets can be purchased for $400 and single day VIP for $100. VIP Payment plan option is also available with $198 due upon purchase. No word yet if single day GA tickets will be on sale! This event is 21+ (Sorry kids)

Secret Project emerges from a neighborhood that has quietly, over the last few years, become one of the most exciting in Los Angeles. Hidden between the Gold Line, the renovated Historic State Park and the LA River, Chinatown’s Naud Street neighborhood has added world-class restaurants, art galleries and events, a wealth of street art walls, uniquely creative businesses and cutting-edge musical projects from Factory 93.

Secret Project will be soundtracked by the worlds best left-of-center DJs and live acts. It is a first of its kind festival in LA, dedicated to presenting the avant-garde, indie-leaning and esoteric strains of electronic music, in a unique outdoor daytime setting. Secret Project will house two main stages in the industrial core of Chinatown – an incredible location for a genre of music that has often been associated with urban centers like Berlin and Detroit. In line with events like Movement and Sonar, Secret Project will takeover venues throughout downtown LA for a range of after-parties with details and lineups soon to be announced.

Which DJs do YOU wants to see at Secret Project Festival 2018? Comment below to win TWO tickets 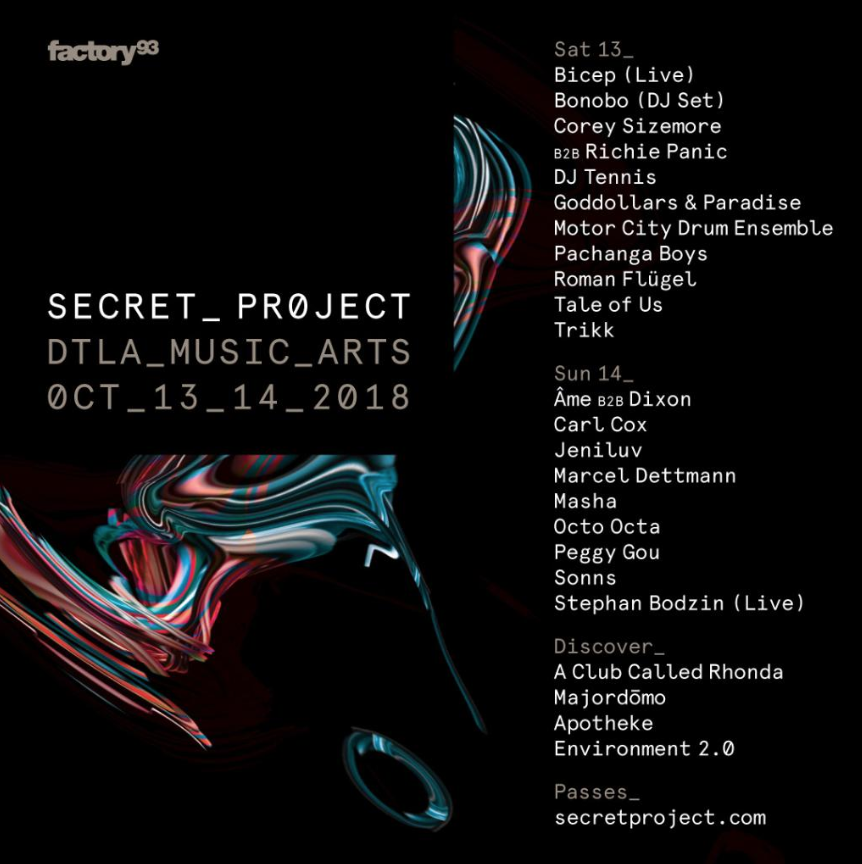