For whatever the reason may be, Skrillex fell off the festival circuit over the last few years as he’s been busy producing countless records for some of the industry’s top music talent in Pop, R&B, and Hip-Hop, so any appearance Sonny makes at an event has truly become special. The only festival sets he has done in 2018 have been Fuji Rock festival in Japan, Form 2018 in Arizona, and most recently announced Snowta in Minneapolis for a special NYE countdown performance. But don’t sweat it, Skrillex is adding one more festival appearance as Global Dance (not to be confused with GDE) and Relentless Beats have announced Skrillex as one of their main headliners at Decadence Arizona 2018 at the Rawhide Event Center. By the looks of it, he’ll be playing on Sunday, December 30th.

The Porter Robinson announcement is exciting as well, as Porter has been concentrating on his Virtual Self project for almost a year now and rarely playing a DJ Set. Porter’s DJ sets are absolutely incredible as he throws down while still bringing all the feels with his euphoric tracks. Rounding out the three is the legendary Eric Prydz who will be bringing his absolutely insane progressive house and techno tracks to the stage and will definitely be an artist not to miss at Decadence AZ.

So join thousands of ravers to see Skrillex, Porter Robinson, and Eric Prydz at Decadence Arizona 2018. Tickets On Sale Tomorrow at 10am

Which songs do YOU want to hear Skrillex play live at Decadence Arizona 2018? 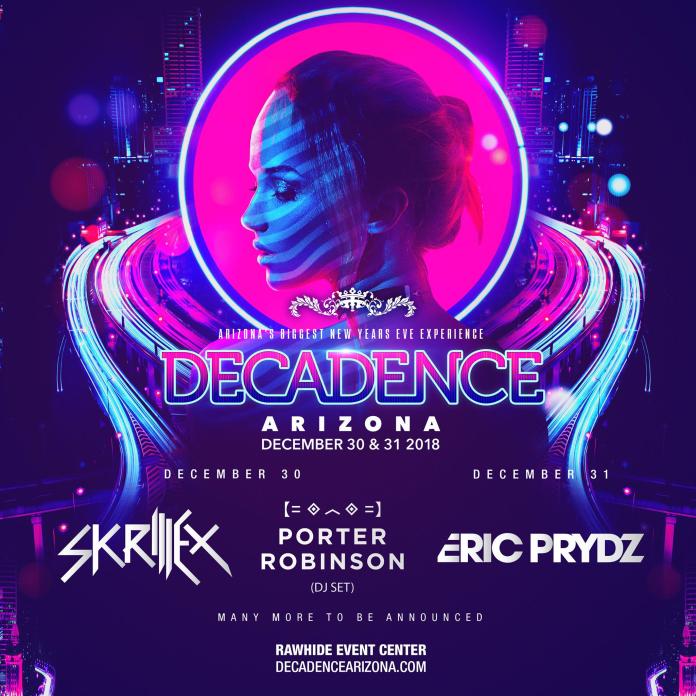