It has been about a year since lockdowns started around this country and many of us danced at what would be the final festival for a long time. Now, a year later, as vaccines roll out and there is light at the end of this dark pandemic tunnel, there seems to be hope to have some things return by the end of the year.

Festivals are announcing lineups and tickets are going on sale. While the festivals that were supposed to happen earlier, such as Ultra and Coachella, have been postponed, the ones later on in the year, such as Life is Beautiful, are carrying on.

Lost Lands and Bass Canyon have joined the ranks in giving us all something to look forward to. Excision took to social media today to announce that they were moving forward with planning the festivals in the hopes that this would all be behind us by then. Large-scale events take a while to plan, and it needed to be put into motion if there was any hope for it happening. If it still was unsafe, the festival would of course be canceled.

There are no dates for these festivals, but tickets are going on sale on March 18th for Lost Lands, with Bass Canyon following shortly after. Safety regulations are being considered, as well as the touch and go aspect of the constant change that this pandemic has thrown our way. But who knows? Maybe we will be able to dance together again at some point in 2021.

Are you going to buy tickets to either festival in the hopes that it’ll get better? Read Excision’s statement below, and let us know! 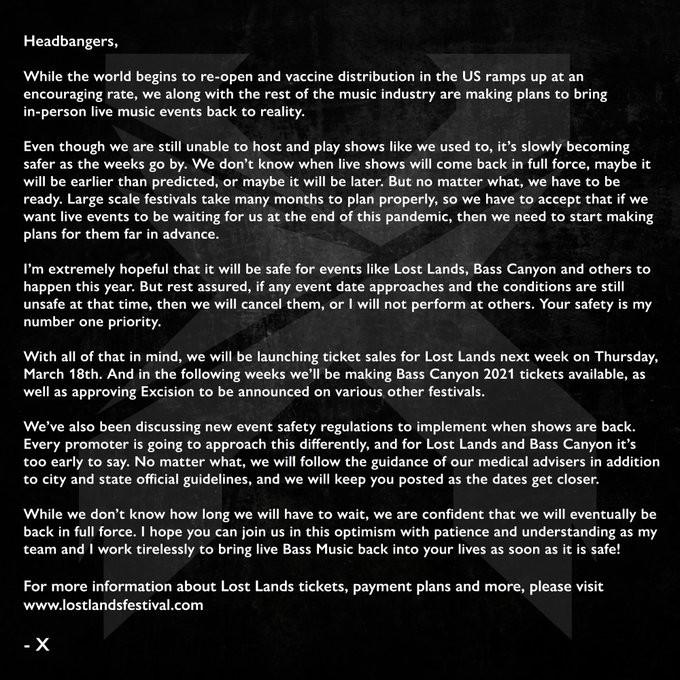